A global selection of objects, concepts and spaces for the future 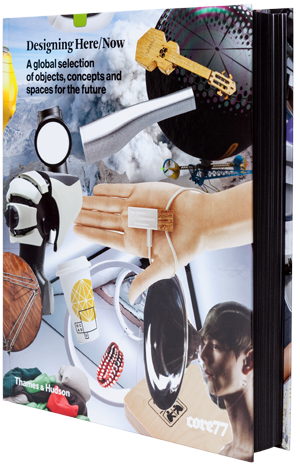 is driven by the imagination,
experiments and challenges found here.

When so much is poured into a book about design, it's important to understand what motivated its creation and what needs it satisfies. Designing Here/Now offers everyone from seasoned design professionals to the casual dabbler a closer look at what moves design forward, right now. More than just a compilation of projects from the Core77 Design Awards, this collection reveals why intention is just as important as material results in design. We interviewed Allan Chochinov, Chief Editor of Core77, and asked him to explain what significance the book, Designing Here/Now, represents for the design community and future design trends.

Why is Designing Here/Now an important book?

This is an important book for a lot of reasons, but let me argue for three:

First, as digital and screens continue to dematerialize information and separate content from form, books have taken on new meaning, new gravity, and can increasingly be seen as a kind of treat. People love books, and though a lot of what Core77 does is on the Internet, our beating heart is in physical things. (Hand Eye Supply, Conferences, bikes, shoes, etc.) This book means a great deal to us, and with it we are proud to have created a tangible (and weighty!) artifact.

The second reason is about the value of time capsuling and creating a permanent record. We see Designing Here/Now as a testament to design enterprise and excellence, but we also see it as an historical record—one that features projects, designers, jury members, design firms, and educational institutions that are critical of the moment we are now living in. The book draws a line in the sand and says, “Design has a long history, but it's also experiencing an amazing moment right now. And here is a group of work that evidences its wonder, its rigor, and its impact.”

The third reason (and we're biased here) is that the book was produced by two of the most esteemed design and publishing groups in the world. Thames and Hudson is an incredible publisher with fantastic and essential titles, and Project Projects is the premier design firm for producing cultural printed artifacts. We have great partners, and we're grateful for their contributions.

Who will benefit most from this book?

Designing Here/Now acts as a kind of design bible for multiple audiences: For design professionals and design firms, of course, it is terrific recognition of their work and the work of their peers. For independent designers, it is an endless sourcebook of design inspiration and provocation. For design school departments and their students, it represents a comprehensive snapshot of where design is right now, and an aspirational guidebook to the very best and most progressive that design can offer. For design fans and everyone in the creative arts, the book serves as a lens into the world of design and all of the amazing pursuits that it wraps its arms around.

What were some of the challenges in putting the book together?

We were concerned that the texts accompanying the images of the work would be too brief to be useful. We wanted to strike a good balance between something that was browse-able—a coffee table kind of thing--but also something that readers could sink their teeth into. We hope we've created a balance. For example, the roundtable discussion on The State of Design was severely edited for space because that discussion went on for hours, and trying to cut down all that content took several attempts. Overall we're very happy with the way the book turned out, but any project can always benefit from some iteration. Let's look forward to the next edition!

Is there a digital counterpart to the book?

Absolutely. Readers who are interested in the projects featured in the book can find more images, more information, (amazing) project videos, and a ton of extras at the Core77 Design Awards sites: Check out the projects from 2011, 2012, 2013, and 2014!

So, what IS design, here and now?

Design is clearly in a strong spot—with huge attention from business and business press, skyrocking attention to interaction design, open hardware, code, the internet of things, tools and influences from the maker movement, social innovation, resilience and stewardship, new methods around design pedagogy...I could go on and on. Design is, right here, and right now, at the most popular and consequential place in all its history. Let's hope this moment leads to a focus on problem solving and introducing wonderful things into the world.

Core77 was delighted to work with New York-based studio Project Projects to design the 2014 Designing Here/Now, published by Thames and Hudson. Headed by Adam Michaels and Prem Krishnamurthy, Project Projects is a design studio focusing on print, identity, exhibition and interactive work with clients in art and architecture. In addition to client-based work, the studio initiates and produces independent curatorial and publishing projects.

We sat down with Project Projects co-founder Adam Michaels and designer Anna Rieger to talk about the inception of the project and how it took form. 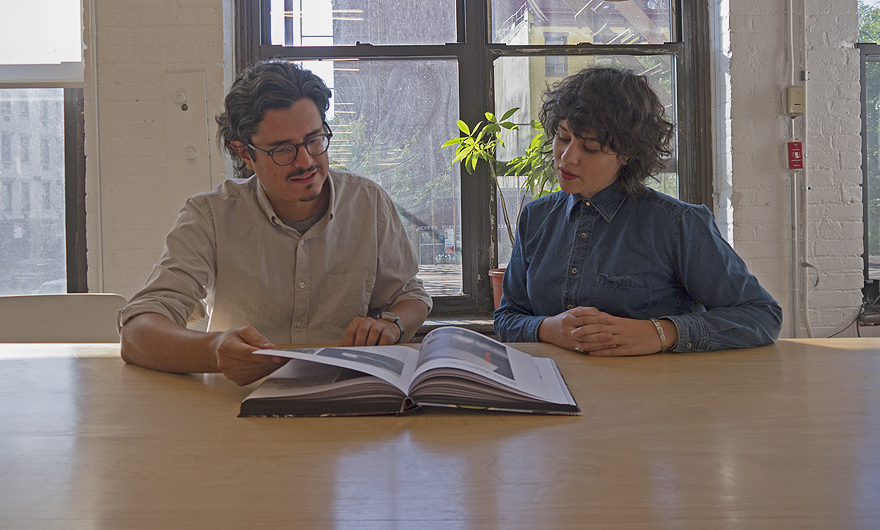 We were excited to work with Project Projects on one of the most ambitious projects we've ever taken on. Tell us how you began the design process and what challenges you saw at its inception?

Adam Michaels: We, too, were thrilled to be asked by Core77 to collaborate on Designing Here/Now. It's always a pleasure to work on projects in which design itself is the overt subject matter, as we certainly remain obsessed with this stuff. As potential readers, we found the book's vast array of projects (spanning innumerable media and materials) to be an intriguing, valuable source of information.

Anna Rieger: Core77 had never published a book about their awards before, though they've had a well-visited website for years. In considering the book's design, we thought about the web's interactive features (for example, the live video announcements about the awards, and videos helping to show objects' materiality). For the book we tried to emphasize the strengths of the medium, creating a design that would reward sustained attention (still easier with a book than in the midst of the web's many distractions) and contemplation, while allowing for quick, occasional browsing (the book's navigation is always quite clear so the reader would never feel lost). 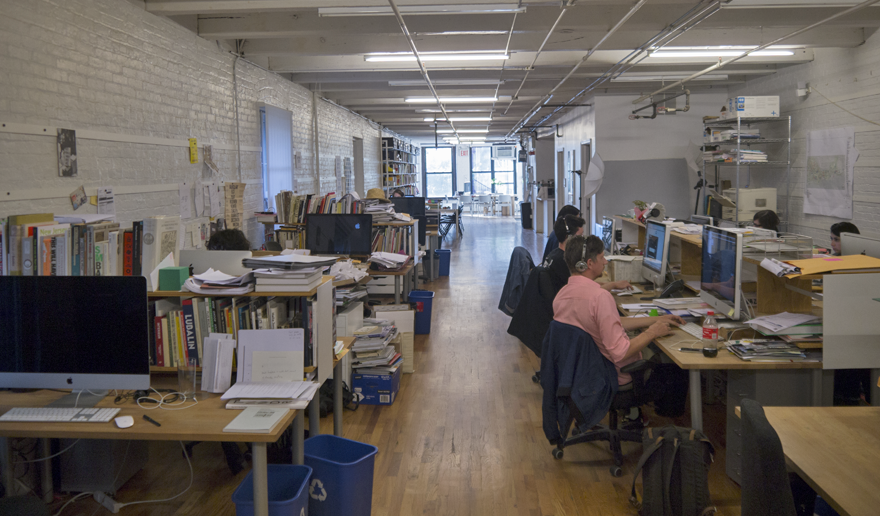 How did you approach this project given how many categories and discrete elements of content were involved in the final piece?

Adam: As book designers, we're drawn to projects with a degree of complexity and scale, in which we determine through typographic, formal, and material means how best to bring clarity to substantial amounts of information. So we were enthusiastic to develop an overall design that balances a consistent, overarching structure (crucial when working at a scale such as that of this 448-page book) with a varied, playful flow through the book's contents from spread to spread.

This flow is first structured by the book's categorical breakdown (also articulated through elements such as running headers); then a relative weighting of projects kicks in (award winners are generally shown at a greater scale); subsequently, the spreads become the result of a process akin to that of assembling a kind of free-form, information-dense jigsaw puzzle. Variables include the details of text per entry; type of image; potential scale of image (resolution issues remain the scourge of this sort of project, involving hundreds of images from nearly as many sources). Each layout is then the result of an attempt to produce an appealing composition--also making sure a given set of projects works well together on the page--after taking this significant range of details into account.

What about the cover? This is obviously a critical element to any book project. How did you resolve to do what you did with the cover?

Anna: The cover is always a tough part of the book to design, especially if you wish for a viewer to be able quickly grasp what the book is about. It seemed important to highlight a range of objects, designers, and categories on the cover, which led us to a collaged approach featuring a wide variety of the book's contents in a visually appealing way.

Adam: The cover showcases an almost literal explosion of contemporary design--conveying something of the excitement as well as the dense degree of current activity across various fields of design. This sense of energy is then distilled into a calmer, methodical presentation of the book's materials as the reader proceeds into the book's interior.

The book's gloss cover and black-tinted edges help to create a sculptural profile for the book; I find it particularly satisfying when the book is open to a section divider with a black background -- this creates an illusion of the book as a solid black mass, which then transitions nicely into the project layouts. 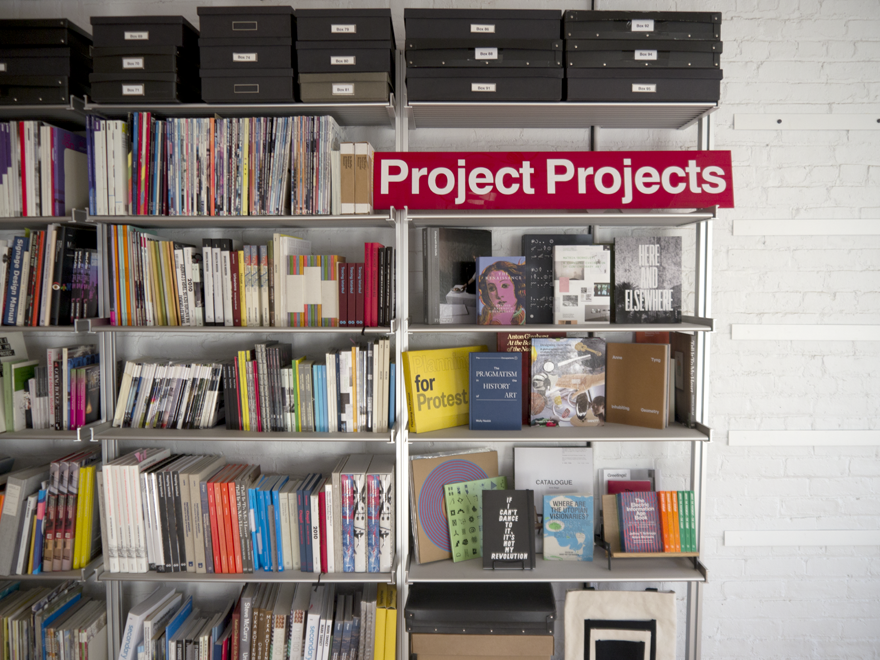 Can you tell us a bit about how you see the stature of print, and of publications in general? (For the record, we think that "print is back!")

Adam: As someone who works primarily as a book designer, I'm far from a neutral voice on this topic! The only issue I could take with "print is back" is that I would say that it never went away, despite whatever predictions may have been made in conjunction with the introduction of various gadgets into the marketplace. Now is a great time to be working in print, as there seems to be a generally greater understanding of the medium's strengths and weaknesses. For example, though I've always been a fan of flyer art, especially from the 1980-90s hardcore punk scene, it seems perfectly fine to me for timely, ephemeral communications to take place online, without the various logistical hassles (and material resources) required to spread information through print-based, physical channels.

On the other hand, print (particularly books) remains the best option when it comes to longevity, as today's digital assets may not function on tomorrow's devices. And while a more subjective matter, for nearly any kind of deep engagement with complex subject matter, I can focus better and retain greater quantities of information when reading in the form of printed books. (Perhaps future generations, raised on tablet computers, will have a different relationship between objects and memory?) Needless to say, there's no contest on the level of visual and tactile pleasure; epub files and readers remain surprisingly crude, with appallingly low typographic standards; the development of unique, complex standalone ebooks still holds tremendous potential while appearing to be essentially stalled due to high development costs and low potential for income. In the meantime, book design and print production are better than ever, as digital tools allow texts and images to be handled with a fluidity that could have only be dreamed of following the advent of movable type.

Lastly, my commitment and belief in the continued viability of books is such that I'm launching a publishing company this fall, called Inventory Press (www.inventorypress.com).

Anna: Since a lot of information is in a digital form now, I feel that when people decide to make a book nowadays there is even more of a desire to create a long-lasting object. There's a movement towards more tactical and unusual materials, and unexpected sizes and experimental techniques. For me, a book is still something like a footprint you leave behind: the idea that someone could hold your book several centuries after you've designed it, and possibly be inspired by it, is fascinating to me. There are so many cultural and political references tied into design, and through a book these stay preserved--almost like a time capsule. I don't think people will ever give up on this medium.

Own your very own copy of the Core77 and Project Projects collaboration, Designing Here/Now, by ordering it through one of these fine retailers: Hand Eye Supply, Thames & Hudson, Barnes & Noble and Amazon