"Let's get that shit off your body" 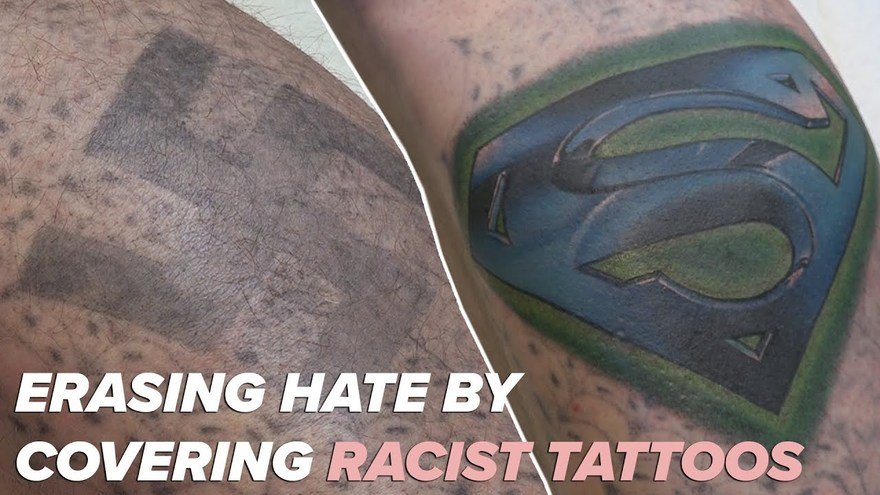 There are the die-hard racists that are unreachable. Then there are ignorant racists that have the capacity for change, who can realize they've made a terrible error and want to transform themselves into better people. These are often individuals introduced to hatred at a younger, more impressionable age, when it seems like a great idea to get a racist symbol tattooed onto your body.

For those that have made that mistake and want to reform themselves, there are tattoo artists across the country willing to cover up the tattoo for free. One such artist is Dave Cutlip of Redemption Ink/Southside Tattoo in Maryland. According to a 2019 article in Pacific Standard,

Once a week, Southside offers free cover-ups for racist, bigoted, and gang-related tattoos through its non-profit, Redemption Ink. Tattoo cover-up can be expensive ([one client] was quoted between $800 and $1,500 for his), making the shop's pro bono operation a highly coveted service. There's a year-plus wait list, and a thick stack of requests sits at the shop's front desk. 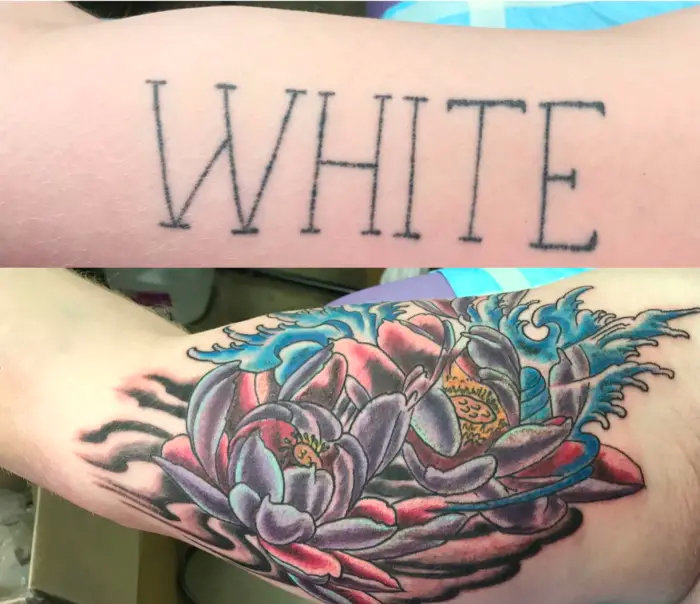 Cutlip knows what his work is worth, and keeps an eye out to ensure people aren't taking advantage.

Not everyone makes the cut for Redemption Ink: Cutlip is quick to reject would-be clients who don't seem committed to moving forward with their lives. "I had a guy come in here, he was a skinhead, and he definitely wasn't finished," Cutlip recalled. "He had fresh tattoos, and not just fresh tattoos, but fresh swastikas, fresh SS's, stuff like that. He just wanted to hide. I'm not here to help you hide."

Earlier this month the Gallery X Art Collective, a tattoo shop in Kentucky, posted this to their Facebook: 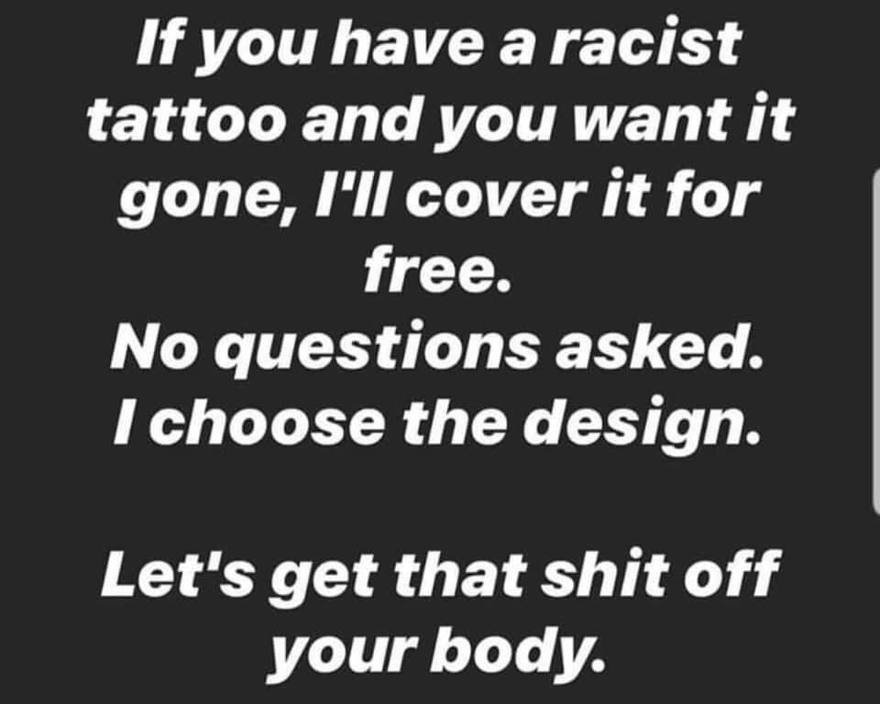 Requests started pouring in, and CNN picked up the story:

Tattoo artists Jeremiah Swift and Ryun King at the Gallery X Art Collective in Murray said they decided to offer this service as a way to take a stance in the Black Lives Matter movement amid the protests calling for an end to police brutality and racial injustice.

"Having anything hate related is completely unacceptable. A lot of people when they were younger just didn't know any better and were left with mistakes on their bodies. We just want to make sure everybody has a chance to change."

"We…got a guy with a giant swastika who said he has never taken his shirt off in front of his kids. I like seeing that. I like seeing people want to change themselves for the better. That swells me full of emotions."

How Do People Fall Into Racism?

Something I found instructive in both articles is learning how these people were led astray. If we can understand that, we can try to figure out how to prevent it from happening in the first place. Here's a story from Cutlip's shop:

A lot of people come to Cutlip with swastikas. He's also covered up a confederate flag with a noose, "shitty pictures of Hitler," and Hello Kitty tattoos with racist symbols woven in. He's even had a former Klansman come in who had finished serving house arrest for committing a hate crime.

"He was raised in the Klan," Cutlip said. "He wasn't allowed to watch TV—he was allowed to read his Bible and go to Klan meetings. Growing up, he was told white people are the good guys, and everybody else were the bad guys."

"It took him being on house arrest and using the Internet for him to actually see how the world really is," he continued. "We took him to his first really nice restaurant. I actually kinda feel like I made a friend out of him."

A client of Gallery X reveals her path: 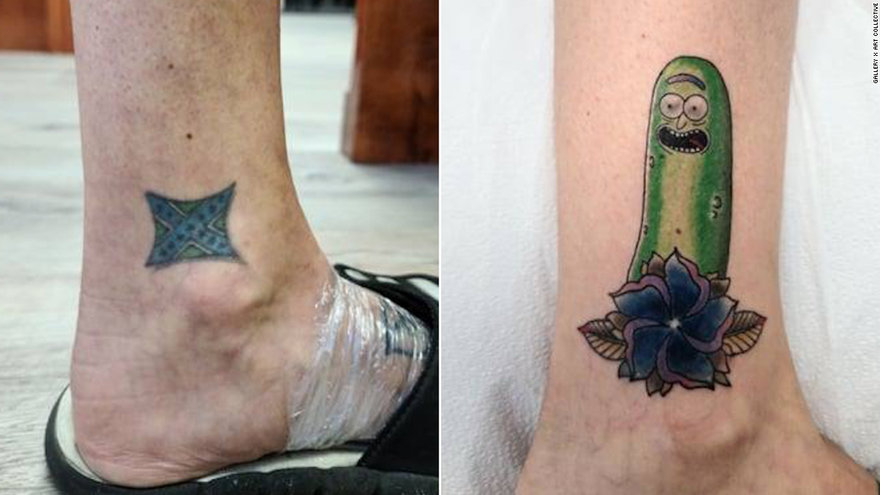 King's first client was Jennifer Tucker, a 36-year-old mother of two who wanted to cover up a small Confederate flag she got tattooed on her ankle when she was 18 years old.

"I went to a school where there wasn't a single black person," Tucker told CNN. "Our community had no black families, they would literally run them out every time one moved in. Everyone in my school flew rebel flags and had rebel flag tattoos and I bandwagoned and got the tattoo. It was a horrible thing to do."

After high school, Tucker moved to Paducah, Kentucky, where she became involved in various solidarity movements and peaceful protests aimed at uniting the community and fighting racial injustice against black people.

A friend of Tucker's sent her the tattoo shop's Facebook post offering the free coverups, and she immediately messaged the shop asking for an appointment.

"I just needed to get that symbol of hatred off of my body. Every time I attend a group meeting or protest, I make a new friend. And I don't want to be standing next to them with a confederate flag on my leg," Tucker said.

Nick Peirce, a tattoo artist at Diamond State Tattoo in Arkansas, has been offering free cover-ups of racist tattoos for years. Here's his story, and the story of one of his clients:

Lastly, for an impressive gallery of cover-ups, check out the Instagram of tattoo artist Billy Joe White.