The award-winning creative team is back with Ultra, its sleekest gear yet.

The most ordinary objects can also be the most critical when it comes to safety. The joys of urban cycling are often accompanied, unfortunately, by dangers like crowded roads and inconsiderate drivers. In New York City alone, cycling fatalities shot to record highs in 2019, calling for reforms that may come too late for some. Often, the only thing between a biker and disaster is a well-made helmet and reliable light system, especially during night rides, when visibility is crucial. Now, with fears over Coronavirus keeping many off public transportation and on two wheels, the bicycle has become one of the most popular means for getting around. And the risk for first-time bikers can be even greater.

"There's a lot of tension on the road, and accidents can lead to cyclists dying. This is a very real problem that we're trying to address," said Eu-wen Ding, CEO of Lumos Helmet, the next generation in smart helmets, whose sleek, light-up wears can transform cyclists into one-person traffic signals. "If we do our job right, that means a driver will be that much more likely to see the cyclists and, therefore, not have an incident. That's why it's worth putting in the hard work."

Initially launching on Kickstarter in 2015 with the (aptly named) Kickstart helmet, this month, the team follows up on its award-winning design with the Lumos Ultra, tweaked to address feedback from backers. 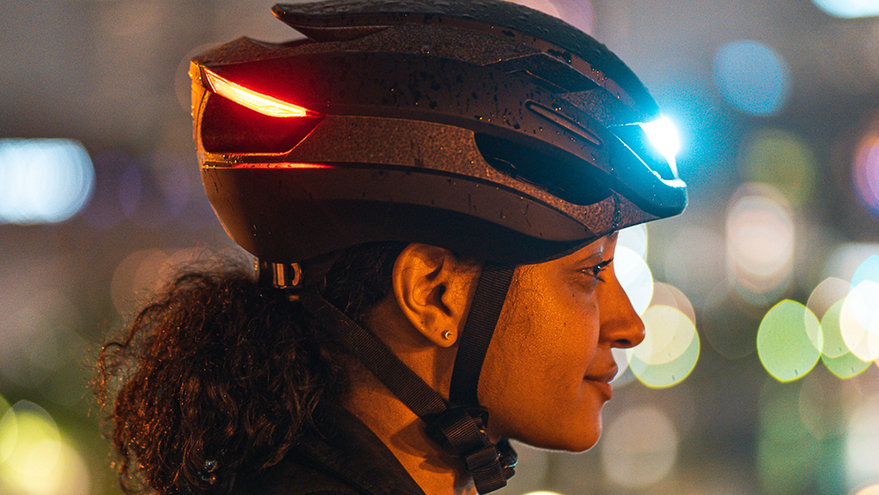 "It was really just an idea I had while riding around Boston," Ding explained in regard to Lumos. "It gets dark so early. I felt like there had to be a better way."

Ding had always had an entrepreneurial flourish and knew he wanted to create a project that would excite both bike and tech lovers. "It was always a dream of mine to have a successful Kickstarter campaign," he said. "I was fascinated by the idea that you can come to the community and create a product together."

In its launch, Lumos raised over $800,000 and sparked an instant, dedicated fan-base, and in the years since has landed on the cover of Time Magazine's list of Best Inventions of 2018, and last year became the first helmet sold at the Apple store. Oprah even selected Lumos for her 2018 list of Favorite Things. Although there are now several "smart" bike helmets available, the Lumos was one of the first, and certainly the most design-centric. Rather than relying on a system of clip-on lights and cumbersome, easily-pilfered gear, Lumos' lights are molded into the helmet. A remote on the handlebar, when pressed, allows riders to activate the turn signals, and as cyclists slow, a motion sensor in the back enables the brake light. The result is that lights are visible from 360 degrees.

"It's fairly straightforward," joked Ding. "We solved a problem that, for whatever reason, didn't yet exist in the world. That's what kicked Lumos off—and Ultra is very similar in concept."

Back to the future

While the Kickstart, and later the Matrix and Street, won over cyclists with its ultra-modern exteriors and advanced usability features, there were still ways fans felt Lumos could improve.

One significant difference between the original and the Ultra is the price point: it's about half the cost of the original. "When we launched on Kickstarter, it was with a deliberately high price point since it was expensive to make," Ding noted, explaining that the smart electronics needed to build the helmet, and the company's lack of an existing supply chain, also contributed to the cost. "Frankly, we were just getting started and not optimized. Few startups are or can be." But now, the team is finally able to offer a more accessible price point.

Another improvement is the weight. Lumos' first helmet clocked in at 490 grams, but Ultra is estimated to have a final heft of 370. Swapping out a clunky lithium polymer battery for a 1100mAh rechargeable battery, Ultra is integrated with a 50 percent larger power supply, meaning both brighter lights and longer life--up to 10 hours on a single charge. 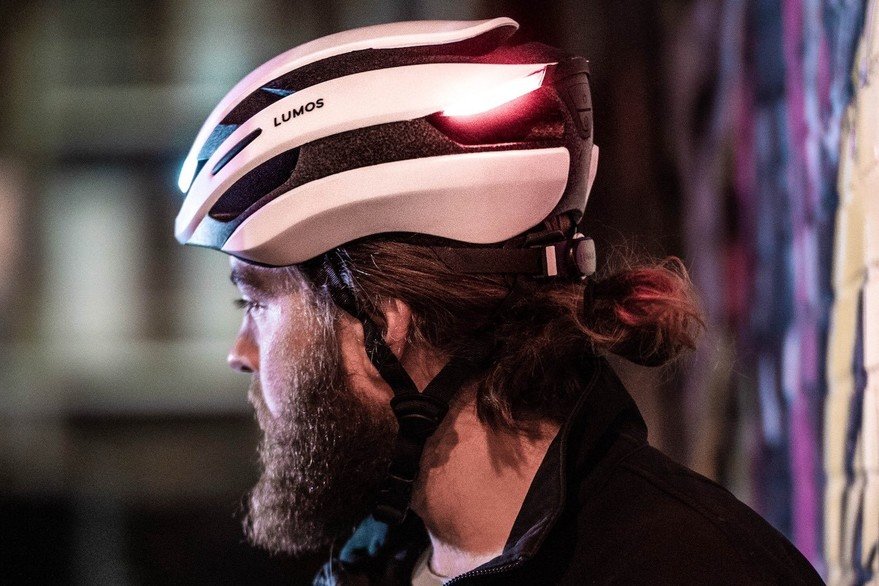 "The Lumos Ultra has an updated design and a snazzy new look, but the fundamentals are still the same," he explained, demonstrating the illuminated red lights in back and white in the front, "these turn into the signals." The results are sleeker than previous iterations, each curve refined for aesthetics as well as performance. "We want to build the best product that we can, and we don't enjoy taking shortcuts. The process, for us, is a form of self-expression." Using in-molding, an advanced manufacturing process that fuses the outer shell of the helmet with the foam liner, the new Lumos is also more durable and even more weather resistant. The Ultra, built to IPX6 standards of waterproofing, was also designed with the option to add MIPS (Multi-Impact Protection System), a safety feature built into the helmet that provides extra protection against rotational motion transferred to the brain, one of the leading causes of severe brain injuries.

With weather a concern, the team has created three exhausts in the rear to ensure "hot air gets pushed out, helping to keep the rider cool, whether on a commute or a training session."

Another new design touch is the addition of an optional visor attachment to shelter you from the elements.

While the helmet's original model featured an integrated, wireless-activated headlight, tail light, and LED turn indicators (via a handlebar-mounted remote), the Ultra's tail light function has now been integrated into the turn indicators. Additionally, the turn indicators can now activate through smart gesture recognition algorithms in the Lumos app for Apple Watch by raising your hand. The app's most whimsical touch is its ability to customize light flashing patterns—giving it the feel of the helmet Marty McFly should have been wearing.

"Our hope for the design was something in the middle that was both 'sporty' and 'commuter,'" said Deng, "and straddles both worlds nicely." While the Kickstart was more of a commuter helmet, with Ultra, "we feel like it will be very fashionable, even with the performance crowd."

"It simplifies your life, gives you better safety, and is just a lot more convenient—it's all in a package for Ultra."

For its Kickstarter launch, the Lumos Ultra comes in a range of exclusive colors and with a variety of early backer benefits.

"We didn't invent the idea of helmets with lights for turn signals. The idea existed before, we were just the first to make every detail perfect. Or as perfect as it could be at the time."

Ding is proudest of the helmet's lights, which go beyond traditional, bulky light modules for a streamlined look. The end result is protective gear that "works like magic—which is where the name comes from."

Lumos Ultra is live on Kickstarter through July 19, 2020.