"Lost in the Collapse of Figure and Ground"

A review of Not to Scale by Jamer Hunt

It would hard to imagine a more urgent time to have a book debut into the world whose subject was "scale and complex systems." Neither the Covid-19 pandemic nor the racial justice reckoning was the raison d'être for Jamer Hunt's outstanding and necessary new book of course, Not to Scale: How the Small Becomes Large, the Large Becomes Unthinkable, and the Unthinkable Becomes Possible, but they provide some pretty extraordinary surface area onto which his ideas will land as you read it, and as these ideas then refract through the layers of scale in your life, your neighbor's life, your work, your culture, your politics, your planet. 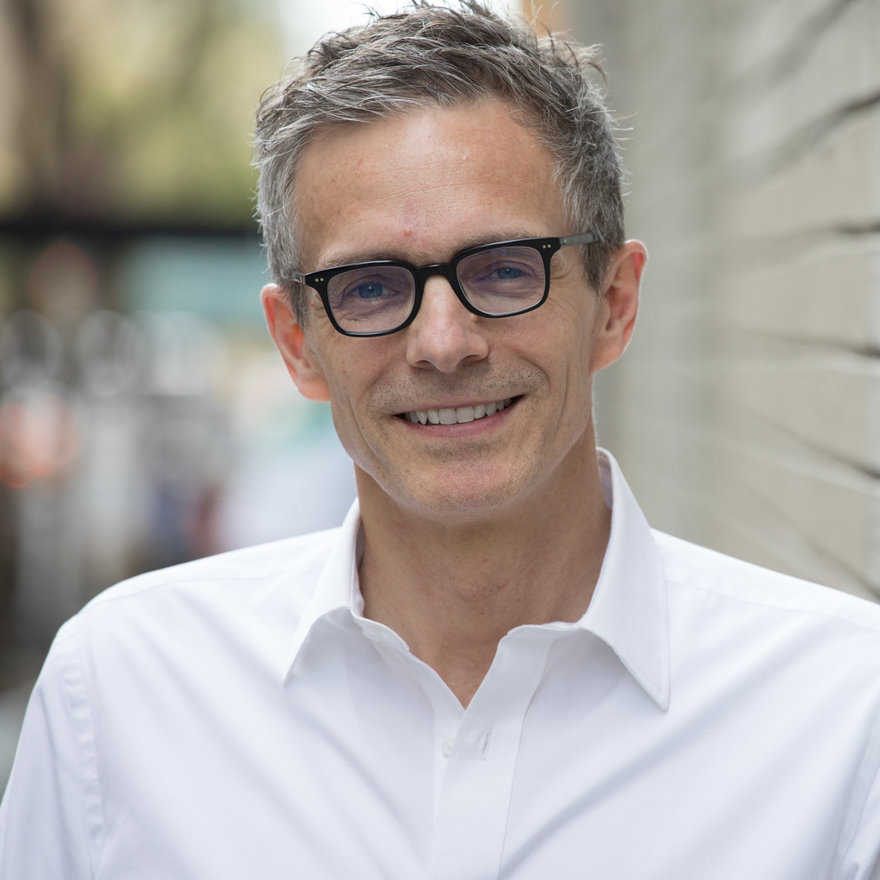 This is a book that everyone can benefit from, and it is clear that Jamer wanted to reach a broader audience than academics or systems wonks. In that service, he lays out the structure of the book in an arrangement that seems almost musical—lyrical at times to be sure—but actually kind of pop-musical: There are the baseline and kickdrum of consistent fascination propelling you through the text; there are solos, harmonies, chords and fermata where ideas weave and intermingle. And then of course, there is the verse-chorus repetition between the "reframe" and the "example."

Here's a particularly resonant combo of the two, from the intro, worth quoting at length:

"More than that it has become harder and harder to draw boundaries around the actual problems themselves. ¶ For instance, if we want to help to improve our local public schools, do we look to the classroom (the books, the desks, the lighting, the schedule, the curriculum) or to the teachers? Given the massive underfunding of school districts in many urban centers, perhaps we should start at the scale of politicians who systematically underfund these districts? Or maybe, as some experts have pointed out, we won't see any improvement in the performance of children from underserved communities until the social and economic prospects of their neighborhoods improve? Or until we overcome deeply system systemic racism? Or improve our public schools? Where do we even start… given that so many have tried and failed already? How can we better our schools when we can hardly design our way out of a paper bag? Simply determining at which skill to act is making "wicked problems" like these even more unsolvable. Should concern parents, for instance, address the problem by starting at the scale of the students, or the classroom, or the school, with the school system, or the local, state, or national government? Factors and actors at each level seem to contribute to the mess. And should the starting point be different for a teacher? Or politician? ¶ A relatively narrow problem now instantly ricochets in all directions at once. What we might have once been able to address at the local level is now in massive entanglement in scope and scale."

Yup. Factors and actors. (You gotta be on the lookout for these grace notes! Here's a fave to close out a sentence: "As we have seen, even something as foundational as measurement is rife with peculiarities and irregularities, so that much of which we take for granted based on our own human experience is almost false, mostly false, or a little false.")

Now, pop songs also have a bridge—you know, the typically 8-bar respite from the verse-chorus-verse structure of a song, putting some slack into the line, increasing your longing before the snap-back of chorus's return? Well, in Not to Scale, the bridge ("The Numb of Numbers") comes a bit closer to the half-way point, and introduces the recipe—really, the keys to the kingdom for turning the book into a playbook for understanding, and participating in, the world from a designerly perspective. I'm a designer, so of course I would see it that way. But I'm certain that whoever is reading this book—policy-maker, behavioral economist, organizational psychologist, corporate manager, and so many others—will resonate with the one-two-punch toolbox Jamer provides in the second half of the book: Scalar Framing and Scaffolding. 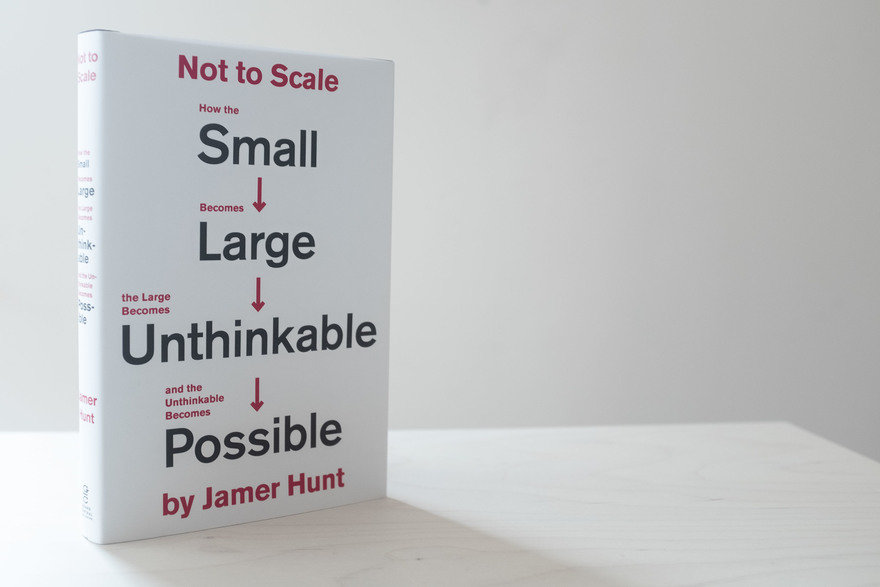 For many designers, Eliel Saarinen's timeless advice has always been an instant, no-fail eye-opener to the power of scale: "Always design a thing by considering it in its next larger context—a chair in a room, a room in a house, a house in an environment, an environment in a city plan." So simple, so memorable, and so useful. But I think many of us felt (and perhaps knew deep down) that this axiom couldn't hold up to the kinds of networked problems that designers dig into today. So instead (I'm imagining that) Jamer chose to use the other beloved, quintessential articulation of scale—The Eames's Powers of Ten—where he is able to deftly overlay the work with his schema of Scalar Framing. His fulsome example imagines the bicycle as the 10-to-the-power-of-1 instantiation, positing that design at this scale might invite industrial designers to have a go. Then up through each of the powers (10-to-the 3rd, for example, would invite urban planners, where 10-to-the-6th and 7th necessitate the involvement of public policy, supply chain, labor practices…you get the idea). It's wonderful that Jamer can add so much dimensionality to a framework that we typically think of as visual—as "objective" really—to reveal the most important ingredient in design: participation. I will let you read the whole example for yourself because it will change the way you think about design and business and politics and systems and kinda everything…really, really quickly.

The fact is, though deadly serious in its material and intent, Not to Scale, for the reader, is actually a lot of fun—a bit of a romp even. Jamer brings his polymathic and exceptional acuity to garden gnomes, the Large Hadron Collider, the length of coastlines (don't ask), the leap second, church organs, rural migration, Marxist alienation, quantum weirdness, the economics of abundance, big data, digital exhaust, AI (natch), drones, the surveillance state, (here I particular love "The smaller and the less visible the force, the more total the danger. Scale has become upended."), asymmetrical conflict, DDos attacks, stop-and-frisk, Stalin (who purportedly wrote that "the death of one man is a tragedy; the death of millions is a statistic." How heartbreakingly apt for our time.) Jamer here (presciently) writes, "How is it that we can be so moved to respond to the suffering of one individual and yet so callous when confronted with the death of hundreds of thousands or millions? Why does the outrage and compassion not scale linearly?"

There are many absolutely exquisite passages in Not to Scale. Jamer's facility with language is restrained and completely unlabored; you're not reading writing exactly—at least not consciously—but then often you are stopped in your tracks. Just try this passage on for size:

"Scale follows us like a shadow. It is tied to our bodies, and yet it has no real substance. We make, or cast it, as a spectral by-product of who we are. Scale lacks substance. It is a construct of our own creation. Yet it, too, seems to follow us wherever we go. Our capacity to orient and ground ourselves against the surround is one of the anchors that keeps us in the here and now; it structures and organizes the spaces we inhabit, establishing a platform of predictability in an otherwise sea of sensations and experiences.

"Our bodies tell us the sizes of things; scale translates that to a different, more explicit form of knowing. A blister on a toe tells us we have walked too far; our smartphones tell us we've walked five miles. Both are indexes of scale, though one is tied diffusely to experience and the body while the other appeals more directly to our head in the form of a quantifiable known. We can feel lightness, smell rankness, taste bitterness, hear quietude, and see dimension. But we cannot know how big Earth is or how small a molecule is without measurement and scale. Scale itself, then, hovers in the space between the body and the brain, between percept and concept."

[And writing two paragraphs like those, dear reader, is why you take a year's sabbatical to write a book!]

Sometimes these constructions reveal uncanny precision ("Space, in virtual reality, is both dimensional and impossible."), and at other times they are just paradigmatically useful. When talking about the infamous Afghanistan Stability/COIN Dynamics map, he writes, "McChrystal's team's ability to amass and represent intelligence and interconnectedness had outstripped its capacity to act effectively on it. It was not as if overwhelming military force had, in some magical way, become impossible. It was as if, instead, the quantity of data available had altered the very quality of the information. Scale had transformed signal into noise." And here's a perfect example of Jamer's use of phase change, doubling down on the map with "What the diagram makers did not account for in the nature of systems is that as they grow and change in scale they can suddenly shape-shift: The [Powerpoint] slide becomes the war and logistics becomes the enemy." Brilliant.

If the scalar framing section lays out the actors and inventories in any scalar conundrum, the chapter entitled "The Middle" is where we learn what to do about it. (For the record, I am not in love with The Middle as the name for this section. I'd prefer something a bit more baroque here, but Jamer is nothing if not modest, and he later rephrases it "the rich, loamy middle." Okay, better—but let's not go too wild here! Also for the record, the choice of "the middle" is intentional, arguing that the tradeoffs inherent in both "top-down" and "bottom-up" strategic approaches beseech something in between. Fair enough.)

The middle contains the scaffolding recipe, with clear, replicable steps: Attunement, Ideation, Prototyping, Programming, Recursion, and Feedback. Designers will immediately flash to the "design thinking" process or the double-diamond innovation process here, but this is SO much more articulate. Just that first word—Attunement—is so powerful in its precision and sensitivity, that when compared with "research" or "collect" or "empathize" or "gather" or any of the other typical design-speak articulations of this initial step…you just can't see this starting point the same way again. And although Jamer takes us literally through just one full example of the scaffolding protocol—the creation and development of Linux—I could swear that he held my hand through a half-dozen more examples. And because I was so excited at this point, I paged through this section repeatedly, even consulting the index under the word "attunement" so that I could find all the other examples of this 6-step scaffolding recipe taking form. But there weren't any; instead, Jamer had already front-loaded them into my brain with everything I had read before we got to the method. This sleight-of-hand is pretty amazing, and in a weird way, makes the reader proud to have already passed the test before it is given; our attunement to scale, itself, has been illuminated so brightly and through such a broad-though-brief voyage aboard this powerful book, we are now ready to formalize a realignment of both our perspective and our eagerness to provide agency to others.

In the book's introduction, Jamer Hunt writes that "in reality, scale is merely a human construct that we layer on top of the things we encounter so that our experiences make greater sense." But near the end he writes that "[scale] is buried in the heart of the very way that we come to know the world." That journey from the layer to the heart? Well, that's why you buy this book.