by Peggy (Mingyuan) Li for ArtCenter College of Design

i'mnot is the Student Winner in both the Sports & Recreation and the Consumer Technology award categories in the 2020 Core77 Design Awards.

With the evolution of electronic synthesizers, MIDI pads, and music-making software over the years from highly analog and complicated to simple interfaces and internet-connected, it's clear engineers are working hard to level the playing field and lower the barrier to entry into music. But it could still be argued there remains a steep learning curve when it comes to many instruments out there today, so what's a true novice to do when they're intimidated by even the "easy" instruments?

Designer Peggy Mingyuan Li spent a long amount of time pondering this question for a project she completed as a student at ArtCenter's College of Design. Her contemplations and design iterations ultimately led to i'mnot, a clever way to introduce beginners to the joy of music. i'mnot is an open-ended musical instrument and subscription service for non-musicians to experiment with sound. The set includes a DJ mixer, a theremin, a piano, a violin, a water phone, a xylophone and a Chinese erhu. As Li states in her 2020 Core77 Design Awards entry, "the philosophy of i'mnot is to bring the concept of "play" back to playing instruments."

i'mnot is a name that stems from the idea of embracing not only one's own novice status as a musician, but also the uncommon nature of a product offering like this one that redefines what an instrument can be. The model of the product series is designed to break down the stressful commitment of buying traditional instruments. You subscribe to one instrument only to discover it's not your thing? No problem—the subscription service allows you to experiment with a different instrument every month to figure out which one you like. 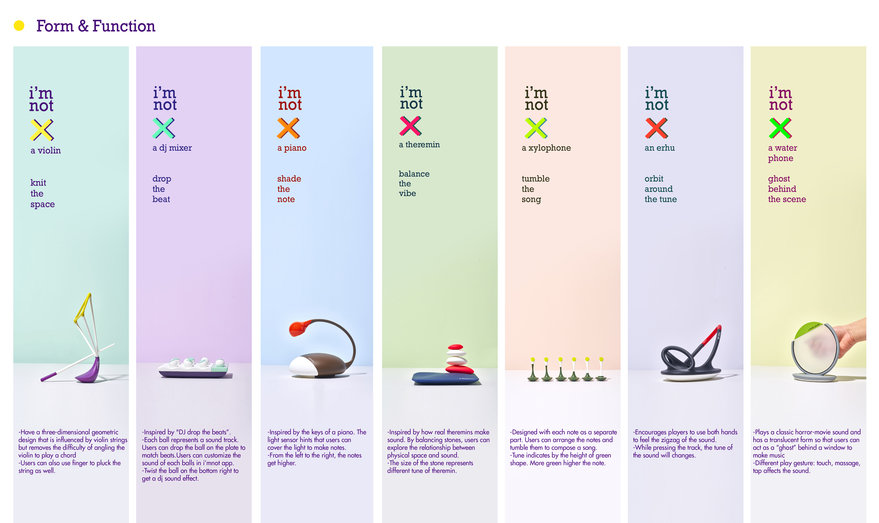 One of Li's main motivations behind the project was to make music making accessible to anyone. She mentions that "playing music is a luxury experience, especially for the people who don't have money and time to learn an instrument." The interface of each instrument inspires users to employ their own unique playing gesture instead of formal methods learned from a teacher. This erases the burden at an early age of playing perfectly, and instead, introduces children to the aspects of music they can fall in love with. "The design philosophy of i'mnot is to tell the world that it's ok if you are not a musician,' Li says, "you don't have to be one to enjoy the playfulness of music.'"