This year has been trying for many of us, but there's a chance in this time of reflection to improve our communication skills. Listen wants to help with that.

Being stuck at home means many of us are spending extended periods of time with roommates and loved ones, which can inevitably lead to quarrels and things left unsaid. Lots of people can also relate to not having the proper tools in their toolbelt to initiate those conversations so relationships can improve—that is, until now.

Listen, a card game meant to facilitate hard conversations, launches this week on Kickstarter and promises an engaging, interactive way to get down to the nitty gritty of what's troubling you and those around you. A therapy tool disguised as a game, Listen works by acting as a space to air your thoughts with another participant. Here's how it works: players lay out the cards and throughout the day are encouraged to fill them out when they have something to say about their partner. For every negative card filled out, players must also fill out a card stating something positive about the other person. These comment cards are later mixed with cards illustrating helpful communication techniques players can use to facilitate a productive conversation about what was written out on the comment cards. 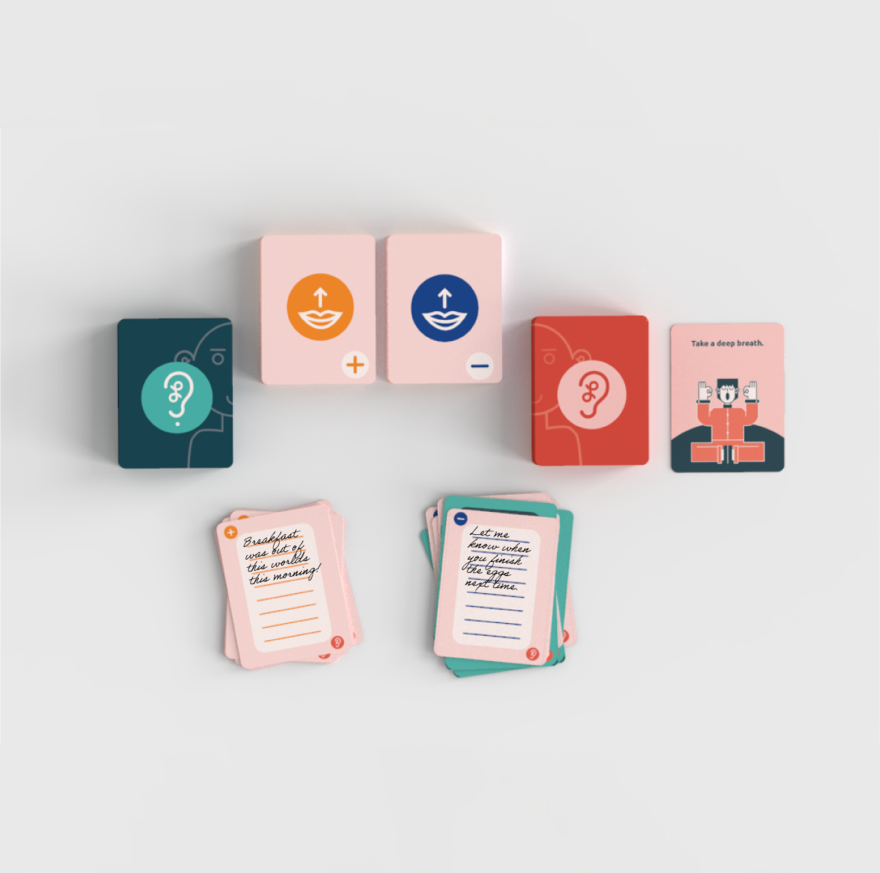 The game, designed by Naïs Hoang, Laura Jaramillo, and Kazuki Guzmán, began from a brief to design a product meant to alleviate repercussions of the pandemic during their time participating in the WantedDesign Schools Workshop in May. The idea stemmed from their own experiences since the pandemic began, as they describe in a recent press release. "Laura was quarantining with her partner in a tiny apartment in Los Angeles, Nais with her flatmates in Paris and Kazuki just had his second child," the team writes. "The common denominator was that neither of them were confined alone - and that came with some all-too-familiar challenges. This realization helped them decide to focus their energy on finding solutions for interpersonal friction that is being amplified by pandemic confinement."

If this time has taught people anything, it's that the little things can either make or break one's own sense of satisfaction and happiness—the team behind Listen hope their small solution to good communication can help make people's lives right now a little more stable. "We hope that Listen will make all conversations approachable," the Listen team says, "from ironing out the smallest pet peeve to tackling that seemingly insurmountable talk.

Listen is now available on Kickstarter until September 3, 2020.