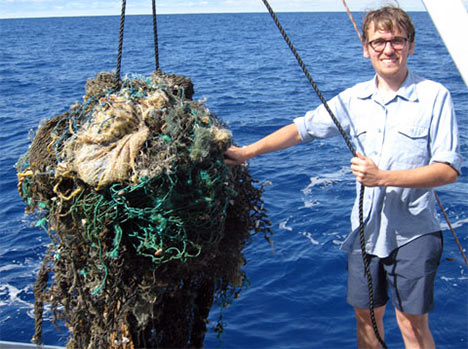 So by now most of us have been made aware of the existence of the North Pacific Garbage Patch, a slowly swirling collection of plastic debris, floating north of Hawaii and generally making life uncomfortable for sea creatures, and consciences uncomfortable for product designers. While harrowing, this man-made monstrosity has always been a little too non-specific to evoke a coherent response: it's the size of Texas, twice the size of Texas, or bigger than the continental US; it's an island, a gyre, a soup; it's a sign of the coming apocalypse or no big deal.

In an attempt to make the whole thing a little more real, Vice Magazine's thoughtful, often fantastic video site VBS.TV has put a small group of grumpy, cussing, passionate documentarians on a boat and sent them out to film the thing. The results are both more and less dramatic than what most of us probably imagined.No, there's no congealed mat of brightly colored plastic stretching as far as the eye can see. In fact, the view from within the Patch is not all that different from looking at a "normal" stretch of ocean. This turns out to be a very bad thing: equipped with a few collection tools, the team scoops up samples of ocean life, and finds that small, partially decayed bits of plastic outnumber sea life in the Patch, sometimes by a ratio of 60 to 1. The partial degradation is in fact very bad news for the oceanic eco-system, rendering large pieces of trash down into bite-sized chunks, easily ingested by birds and fish. One striking observation in episode 9 -- when they finally get into the Patch -- is the relative lack of red or orange colored bits; fish, it turns out, are partial to such colors, mistaking them for shrimp or other food.

It's interesting film-making, and worth watching, as a reminder of both the potential impact of human commerce, and the deep complexity of such problems. If you want to further confuse the issue, check out Natalie Angiers' article from the NY Times Science section last month, delving into the endless benefits that polymers have brought, and the futility in trying to villify them as a whole. Clearly, there's a problem with polymers, and the sort of investigation and discussion being brought about lately (finally) is a small but forceful step in the right direction. Thanks to Simon Lawry at QUT for the tip.