To "make gold into a more functional money," entrepreneur Jeremy Cordon decided to launch a new gold-based currency. Called Goldbacks, it consists of a series of bills--denominated 1, 5, 10, 25, 50--that contain actual, visible, shimmering particles of gold. 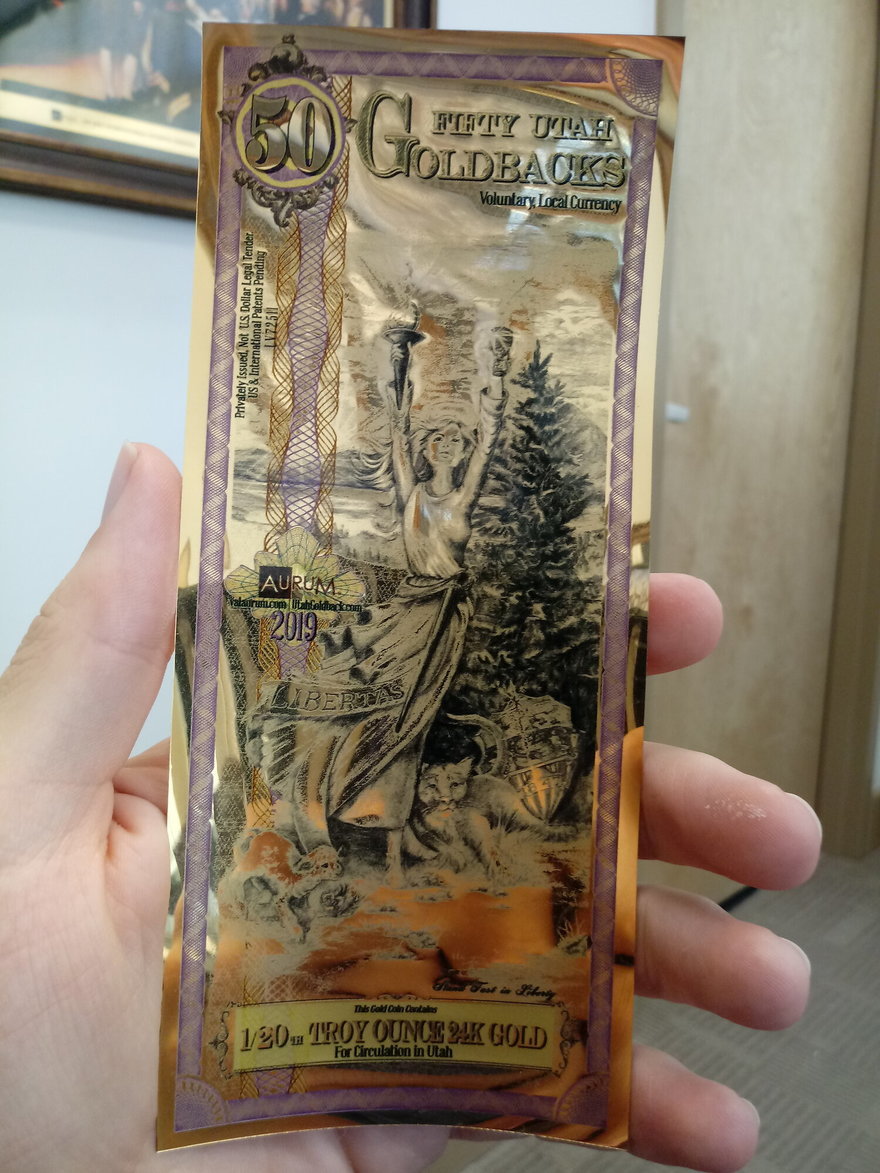 The printing company they use, Valaurum, has a proprietary method of using vacuum deposition to infuse the bills with gold particles. As the most eye-popping example, here's a 100 bill Valaurum created a couple of years ago (just as a proof-of-concept, not actual currency): 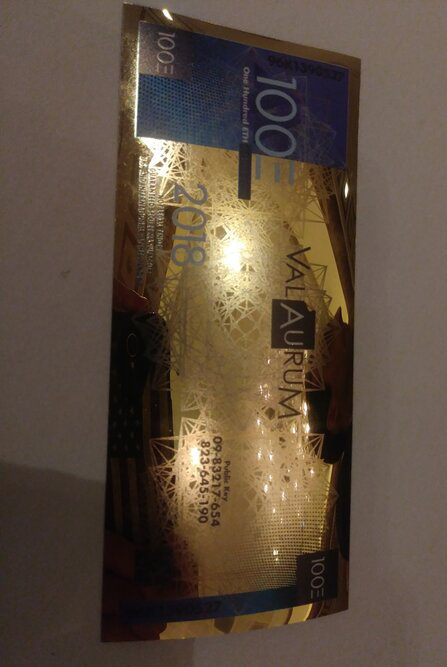 Here's the current line-up of Goldbacks: 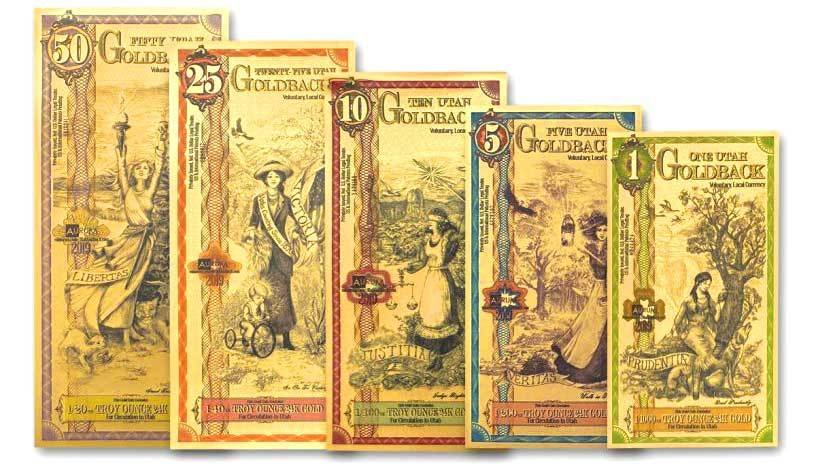 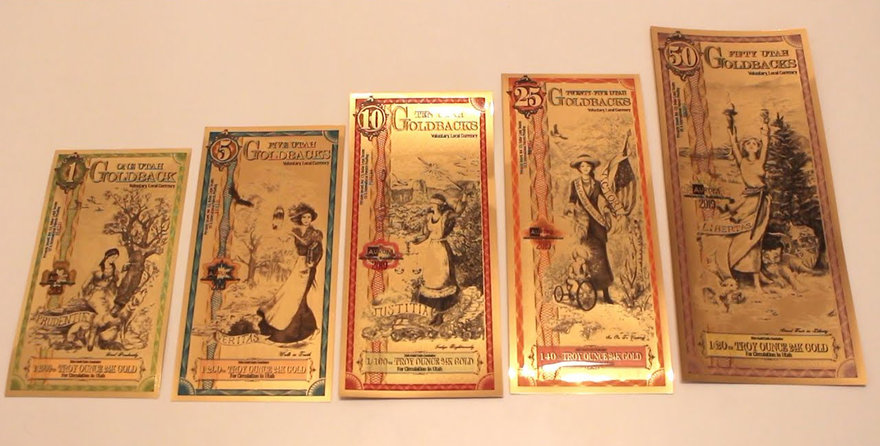 My first question was "Is this legal?" and the company says:

"Yes. The Goldback is a gold product. Ihe Goldback also may serve as a currency or barter tool. It is the opinion of our Attorney that the Goldbacks are legal tender in Utah however, even without this designation the Goldback is still legal to spend and use anywhere in the United States."

Furthermore, on their website they claim "Goldbacks may be used almost anywhere in the world for barter transactions."

I suppose that's really up to whether you and the merchant can agree that the paper is worth something. You can read more about the viability and practical aspects of the currency here. 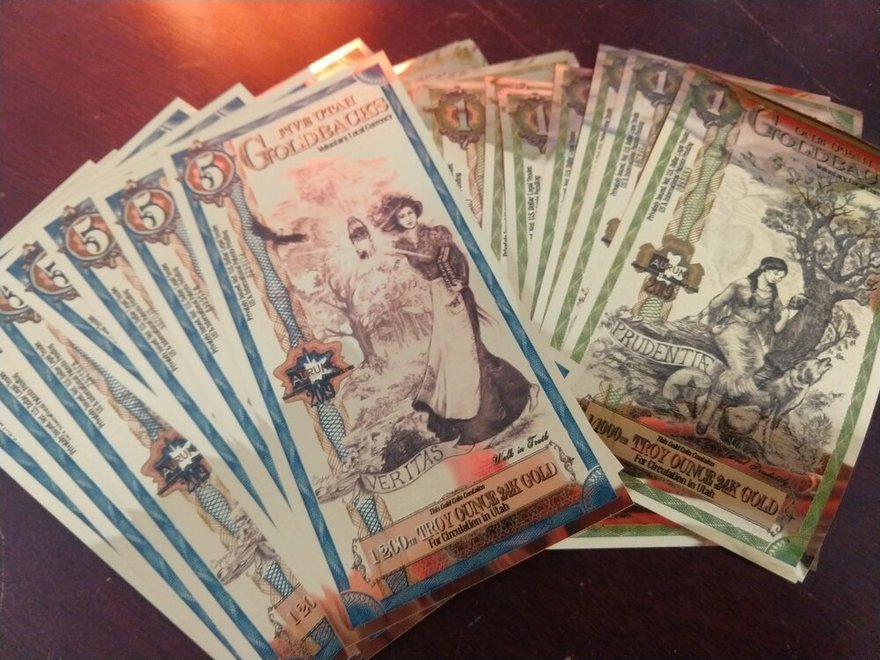 I was interested to read about the design of these bills: What images did they decide to place on the front of them? Historical scenes, dead presidents, monuments? None of the above, it turns out:

"We decided that lady virtues would be the most appropriate thing to put on the Goldbacks because the virtues that they represent make society worth living in. They are fundamental to the peace and prosperity we enjoy and are the cornerstone of western civilization. For these reasons, the virtues have been featured on money for centuries, so we decided to adopt them rather than choosing some historical figure or other less meaningful image." 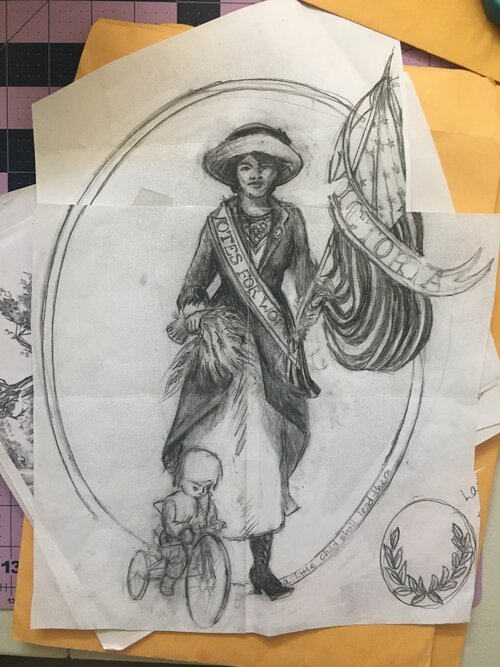 I could only find one entry on their website giving an in-depth explanation of the design on one of their bills, in this case the 1:

"Prudentiae or Prudence is the virtue on the 1, and is meant to represent the ideal that before one can gain experience, wisdom, or authority it is important to first be patient and exercise forethought. This is expressed through Prudence's posture, as well as the mirror that she is looking into.

"Prudence herself represents the Native American tribes within the state of Utah in appearance and dress, with the Ute, Paiute, Navajo, Iroquois, and Goshute tribes being incorporated into her design.

"Elements in the image representing balance in all things (wolf), longevity (bristlecone pine), and peace (Prudence's sandstone throne), among others, are also incorporated into the design." 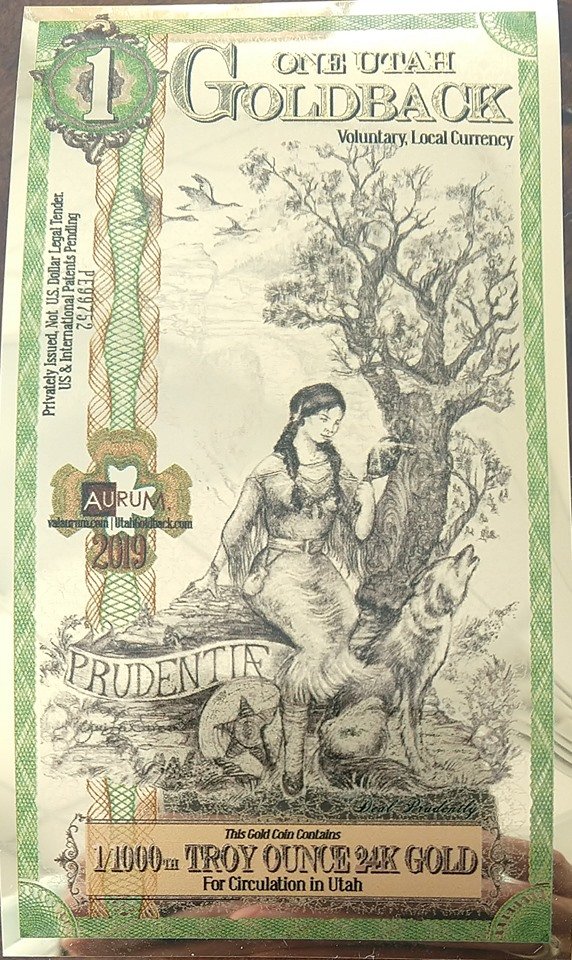 The link between the thinking and the execution doesn't appear particularly cogent; I'd put it on the same level as first-year design student work.

I could only find close-ups of a few other bills on the Goldbacks website. One is of a Nevada-specific variant of the 10, featuring Justice:

Is it me, or does it look like the concept sketch somehow became the final print image? As rendered, Justice has an anime-fan-art quality to her, the horses in the background appear unfinished, and I'm not sure what's going on with the perspective of the barrel at the bottom.

The other close-up I could find was of the 50, featuring Liberty:

There is a weird disconnect between what her torso is doing and where her feet are, as if the flowing robes have been used to conceal a lack of anatomical consistency. It's also somewhat distressing that unlike Lady Liberty, who holds a hardcover in her non-torch hand, this version of Liberty appears to be hoisting a drink.

One positive thing I will say about the design of the bills is that they're differently-sized according to denomination. This is a sensible practice (and a crucial one, to the visually-impaired) that many countries have adopted.

The different bill sizes, however, do not jive with American wallets. Thus they've designed a custom Golbacks wallet that accommodates the unfolded bills and "also serves as a fun display tool when teaching other people about sound money." 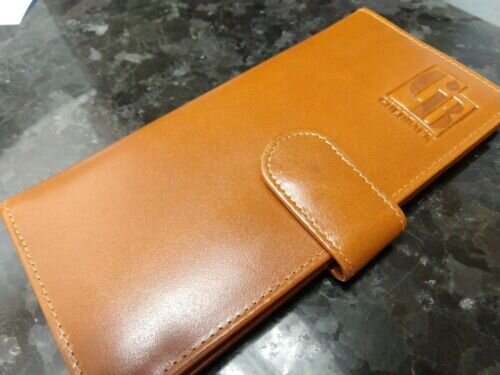 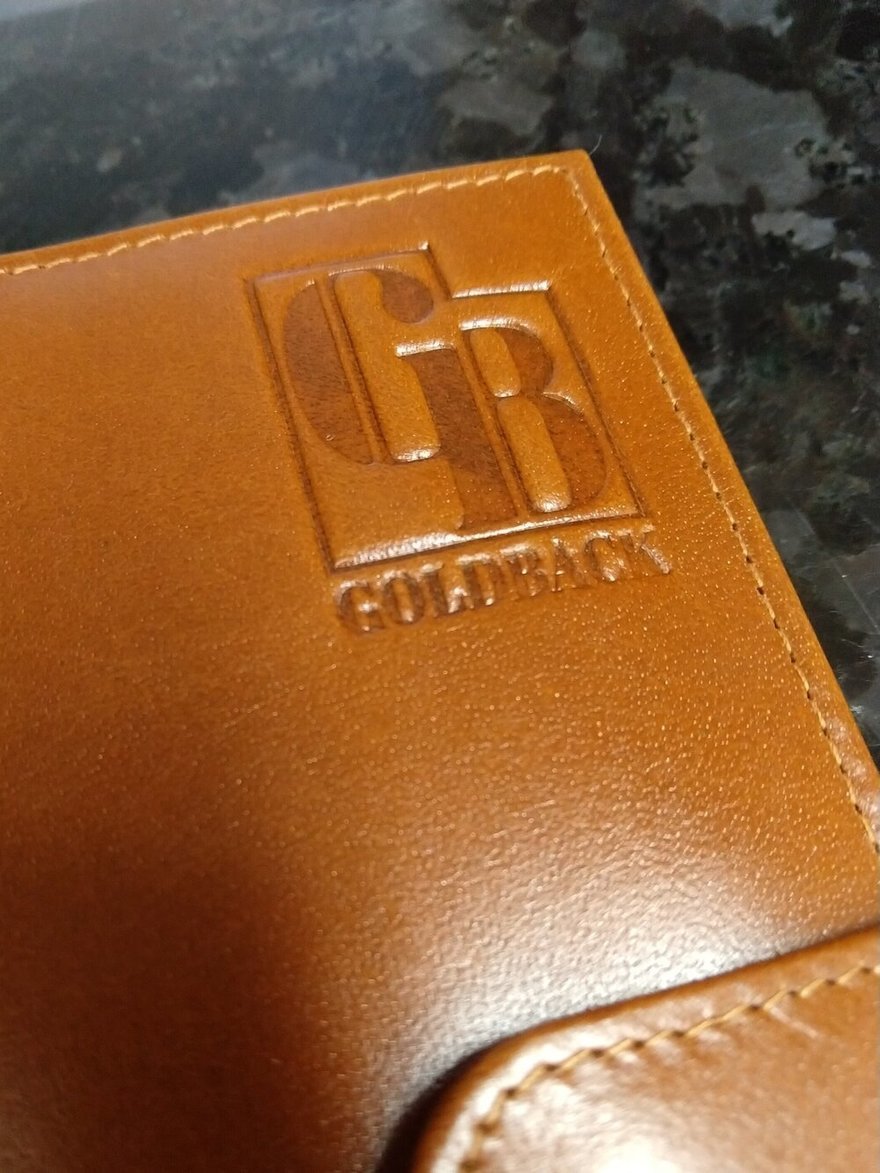 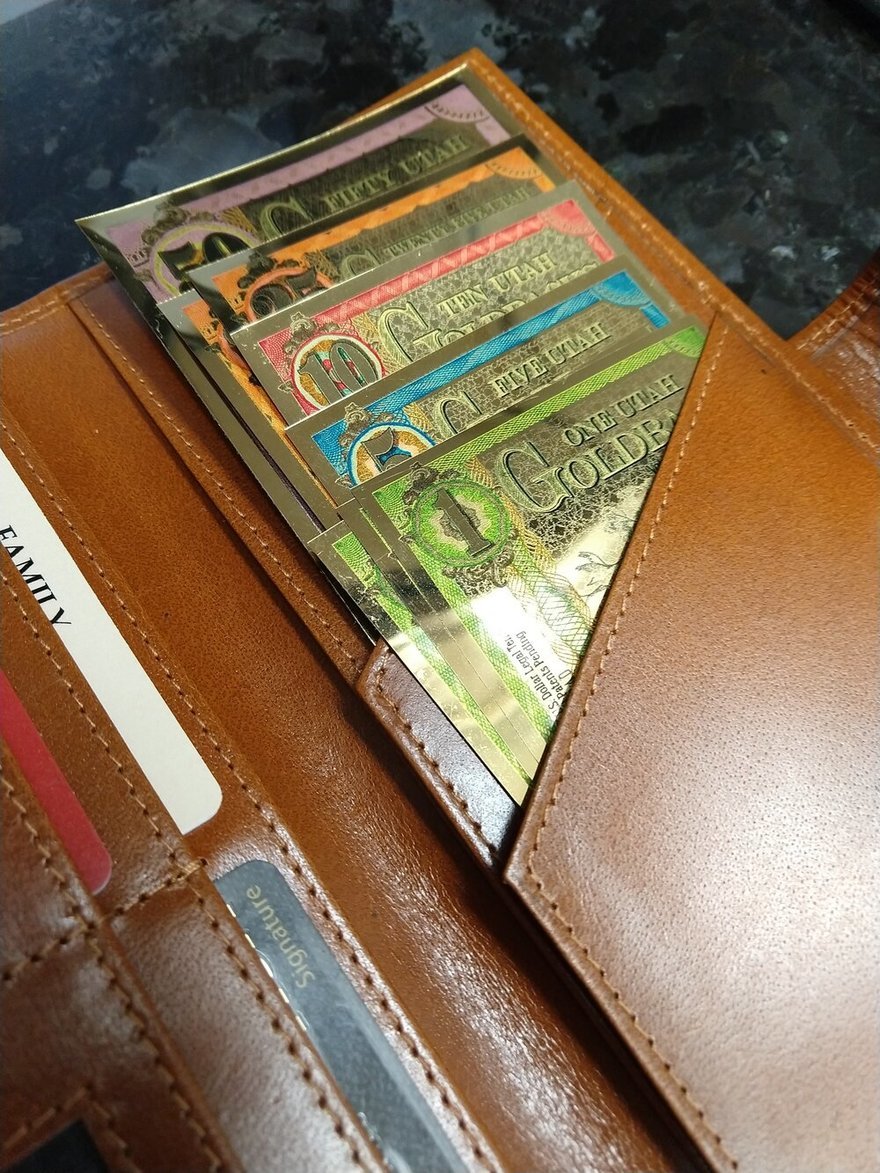 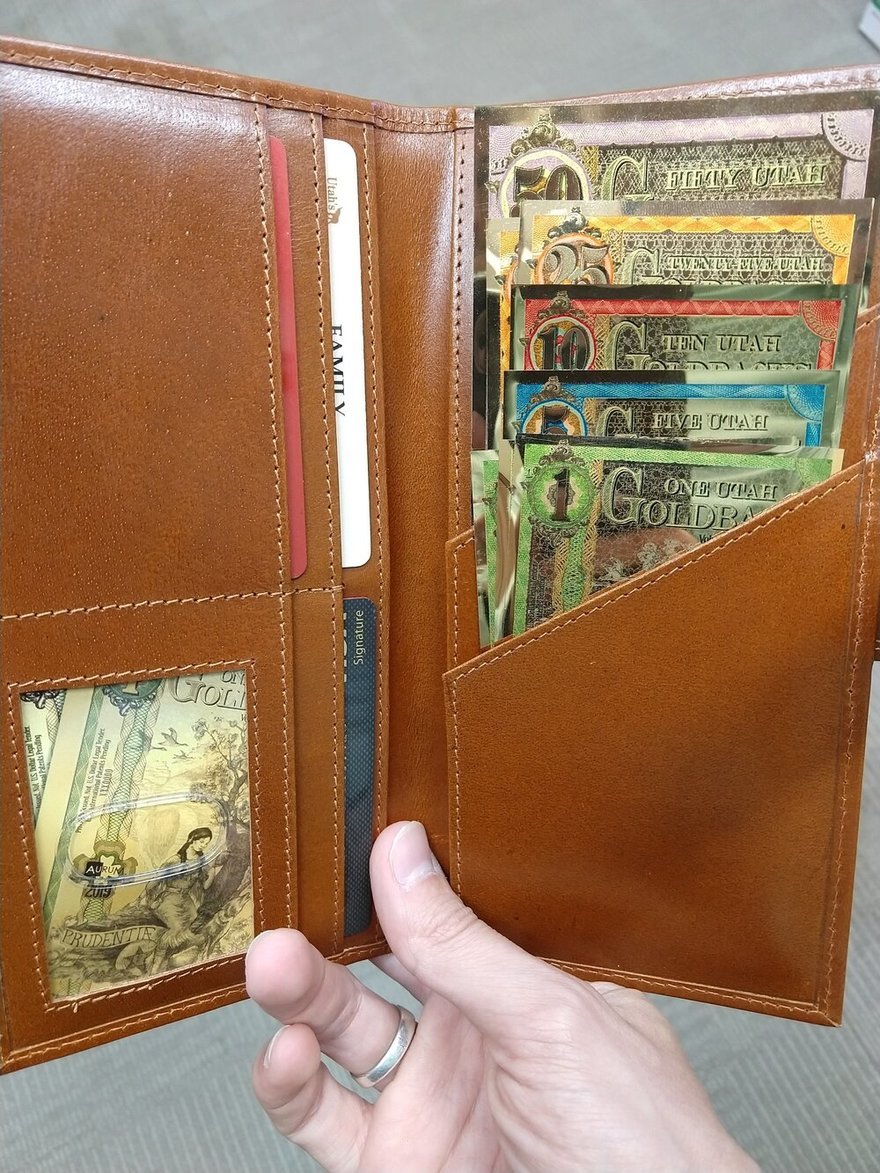 The wallets are sold on eBay (for about $30 to $40, peculiarly, USD only) or you can get one for free if you "order at least 100 Goldbacks of any denomination from the United Precious Metals Association or RareKoin.com."

To see better designs for money, check out:

- The Best-Looking-Ever U.S. Money was Designed in the 1890s 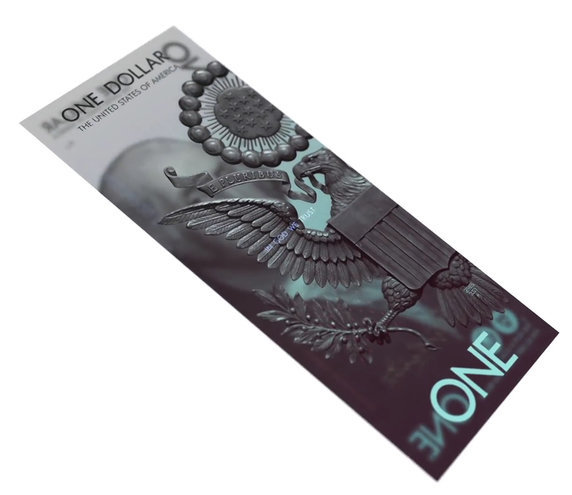 - U.S. Money, Given the Proper Attention of an Industrial Designer