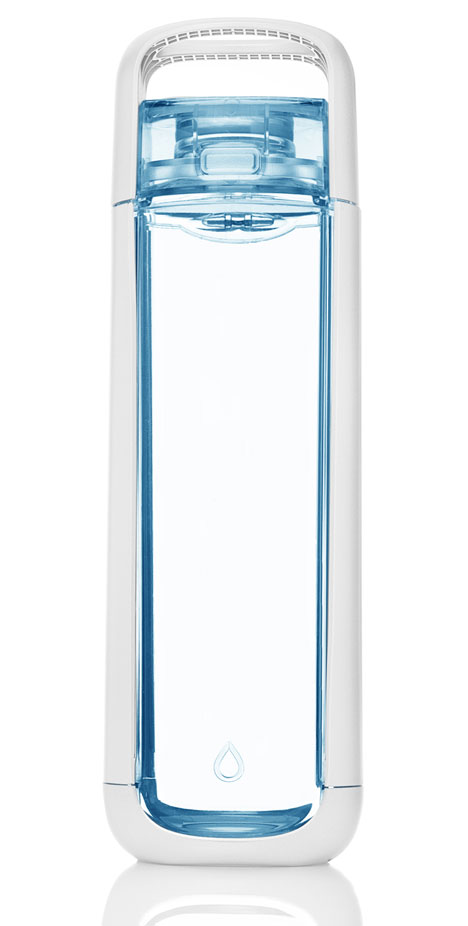 For those of you who like to refill, reuse, and rehydrate, there's a new water bottle coming to town, and it's a serious design contender on aesthetics, ergonomics, materials, and manufacturing. KOR partnered with core-fave Gaylon White and the Eastman Innovation Lab on the project, utilizing their Bisphenol-A (BPA)-free Tritan copolyester. They partnered with California-based RKS on a one-handed lid latch system (no lost caps!) that seals the bottle even when laying flat, and they tapped manufacturing partner Nypro to gate the part so there would be a clear, lens-like bottom. Here's Eric Barnes, founder and CEO from Kor: (We really like the "from KOR" part, natch.)

One of the top priorities for the KOR ONE was durability--bottle materials and construction had to support a long product life to be in keeping with KOR's pillar of sustainability. The bottle had to be made of materials that were as healthy for consumers as they were for the environment. The product had to be easy to drink from and have a "big gulp" feature to allow a high-volume, thirst-quenching flow. The bottled had to be easy to refill from a sink, a refrigerator, or a water cooler. The cap had to offer one-handed operation and be impossible to lose. All these features and more had to be delivered in an eye-catching package that appealed to consumers seeking a luxury product to elevate their lifestyle. Buying the final product should make consumers feel good on at least three levels...they're doing something healthy for themselves, they're doing the right thing for the planet, and they're treating themselves to a premium product they can be proud to display in their homes, in their offices, and on the road.

More info and pics after the jump.Here's a bit more on that latch:

Today, a key element important for manufacturablity and raising perceived value is the elimination of any screws that detract from the design. To do this, the RKS engineering team designed the pieces of the KOR ONE to fit together like a Chinese puzzle. The body of the vessel itself is formed from a single molded piece of Tritan. The trim pieces snap securely onto the bottle, and are locked into place when the bottle top, which serves as a keystone, is fixed into place. RKS, KOR, and Eastman all worked closely with manufacturing partner Nypro to ensure that the final product lived up to the design's promise. One of Nypro's major contributions to the iconic design of KOR ONE was eliminating the "gate" or notch in the center of the bottom to create a beveled window effect. Normally, the gate is in the middle to optimize the flow of the plastic. "They moved the gate off to the side because they wanted the bottom to be clear and crystal-like," says Kurt Botsai, vice president of innovation for RKS Design. "The gating is under the trim so it doesnâ€™t show."

Add a mouth wide enough for ice cube deposits, and you're good to go.

Available at for sale at www.korwater.com August 1st.