A Product Design That Would Never Work in America or China: "No Stack" Shipping Pyramids

I was amused to see that companies like U-Line and others make these "No Stack" pyramids to be placed atop packages: 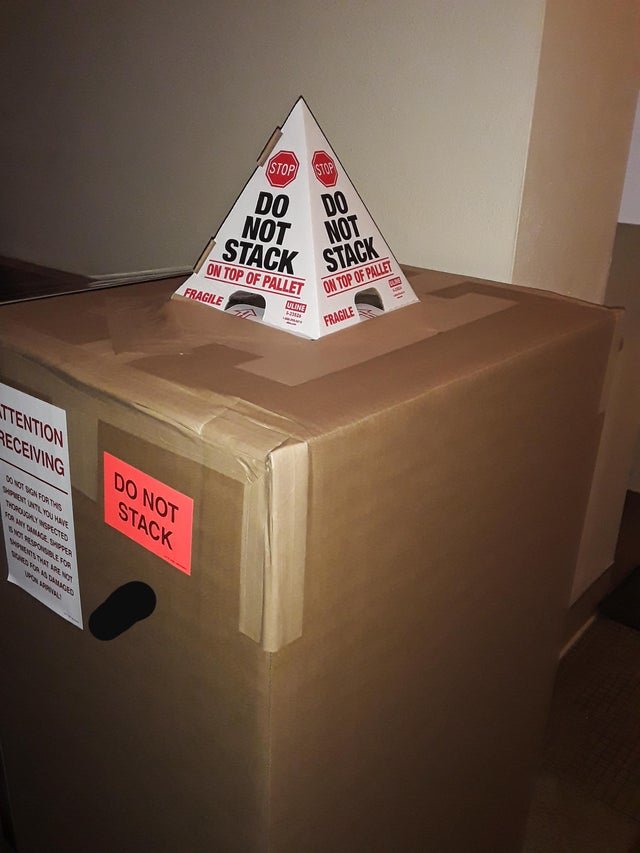 The idea is that package-senders pay extra to have one of these affixed atop their packages, and throughout the entire shipping journey, no one puts anything on top of the box and damages it.

My first thought was "That's cute--but it'd never work in America." At least, not consistently. There's are entire Reddit threads (here and here) populated by comments about these things from truckers and shippers, and I'm admittedly just assuming they're American by the comments, like:

- "Work at Home Depot, can confirm they don't stop those that aren't paid to give a shit."

- "At my current job I have never seen one of those intact! Every single one I've seen here has already been crushed because people don't care."

- "We shipped and received fragile equipment all the time, and I never saw one of those intact. Always bent, but mostly squashed."

- " I understand most people don't work in freight/warehousing but it's all about hitting numbers and being fast/efficient…. When a fork lift driver is loading a trailer out, he is taught to treat it like tetris or a puzzle. If your pallet, with or without a cone, fits his puzzle when stacked with another pallet, thats whats going to happen. Not saying its right, just saying it what happens."

- "I am a shipping manager at a company that puts these on everything! They don't prevent a damn thing. Pallet show up to my customers all the time with these crushed."

- "In my experience, it has never stopped the trucking companies from stacking our equipment."

"I see this is made of cardboard, that way you don't have to deal with pyramid-shaped holes in things."

There were just a handful of comments from shippers saying they do respect these things.

I could see these pyramids being respected in a country like Japan or Germany, where folks generally stick to the rules; I just can't see these offering reliable protection in America or China, for that matter. In my experience neither of these countries are consistently interested in providing great customer service. And where workers may not always be careful, the best you could probably do is follow this guy's advice:

"Before launching a delicate electronic product, we sent out a number of weighted and instrumented boxes with Tip 'n Tells, G-meters, and these cones via different shippers then chose the one that didn't mishandle the shipments (as much)."

A Product Design That Would Never Work in America or China: "No Stack" Shipping Pyramids