TAUR Wants To Make Your Morning Commute a Joy

The chic scooter company with a commitment to sustainability is in it for the long haul.

The world has gone mad for wheels. Since the start of the pandemic, many have opted to forgo tightly packed subways, trains, and buses for personalized transportation options, with car sales skyrocketing and bicycles now the de facto mode of urban commuting. Scooters are also experiencing a renaissance. Their easy-on, easy-off capabilities and lightweight design are ideal for crisscrossing city streets, and a new generation of electric models is transforming the playtime favorite into a sleek urban companion.

"There have been few products as pervasive as electric scooters in terms of their adoption by everyday people trying to get around cities," says London-based creator Carson Brown, cofounder and head of product at TAUR Technologies, which last month closed a successful Kickstarter campaign in support of its namesake electric road scooter. Brown, a trained mechanical design engineer, created TAUR alongside cofounder Richard Adey with a team of experts formerly of Tesla, Apple, and Ford, crafting a product that not only boasts enhanced steering capabilities but is light enough to fold up and take to work—and sturdy enough to handle even the most potholed streets.

Fresh off their success, this week the team launches TAUR.com, accepting pre-orders and offering a peek into the car-free metropolis of the future. 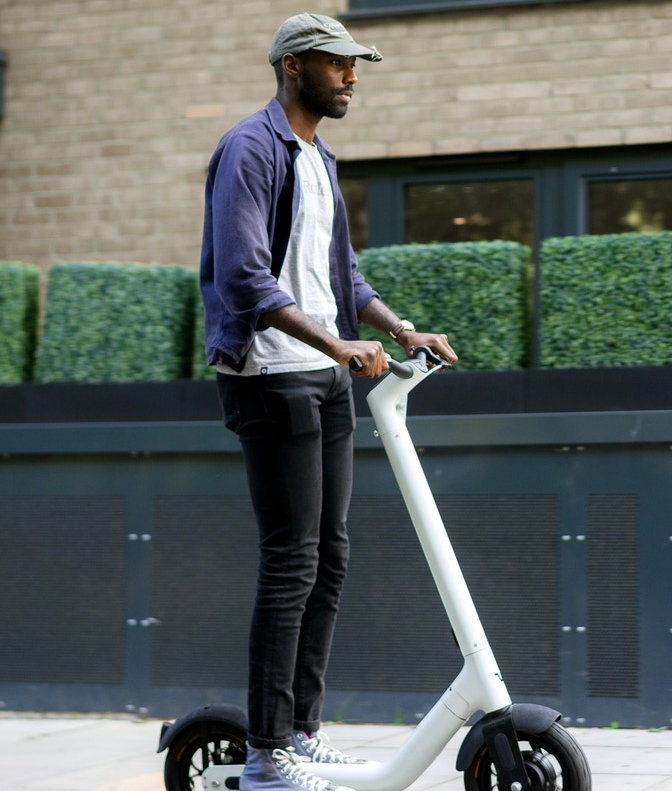 The "child's push toy" grows up

Many of us are more familiar with the rudimentary push toy scooters we loved as kids, explains Brown, who notes that though they provided hours of entertainment, they weren't exactly a blueprint for adult transportation. "The problem is that up to this point, these devices were an adaptation of children's push toys," he says, explaining that they not only weren't designed for adults, but were often challenged by even everyday road conditions.

In making TAUR, Carson and his team sought to reimagine a few critical structural re-designs, primarily the foot platforms that provide a space for the rider to stand, with one foot behind the other, hips at an angle. At over twice the width of a typical scooter, TAUR empowers users to ride with feet side-by-side, one on each platform and fully facing forward, enabling advanced stability, multi-directional steering, and maximum traffic safety. The wider frame also supports sturdier wheels—in this case, 12.5 inch, kevlar-reinforced, puncture-resistant tires—that can be removed and changed in under a minute. Another key feature is TAUR's front lighting, which directs a high power beam to illuminate the way, and rear light projection technology that lights the rider's entire back, essentially creating a safer experience for both riders and motorists. 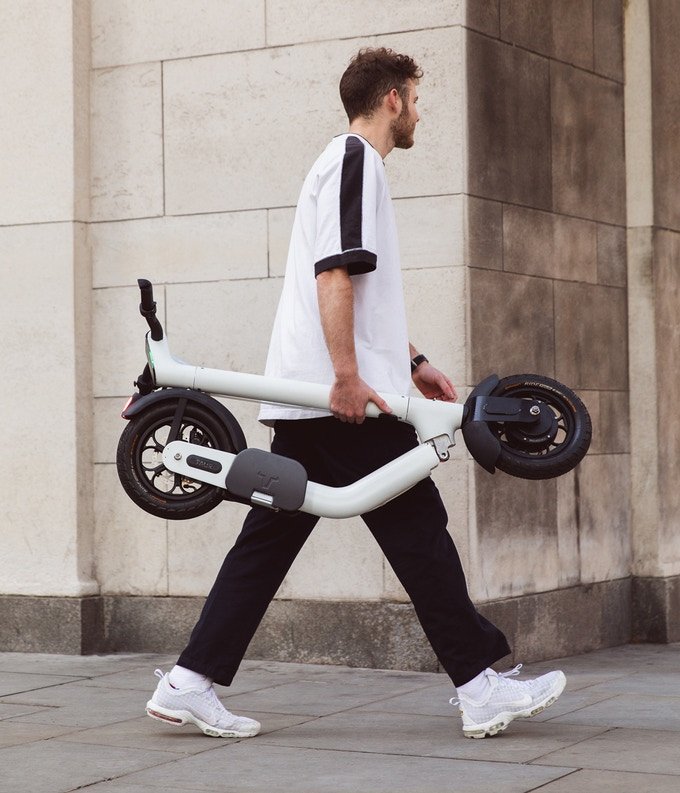 "Our design has resonated with people because we've improved not just the ride experience, but also the lifestyle that comes with owning an electric scooter," says Brown, touting TAUR's ability to easily fold away after a grueling commute. "The true advantage of scooters is the ability to show up on time, like a bicycle—minus the need for a shower. And, if you've spoken to urban cyclists, the prospect of taking it inside and not having to worry about when it's going to get stolen is a huge plus."

Sustainability was also a major focus. TAUR's frame, made from aircraft-grade aluminum alloy, is not only aerodynamic and lightweight but fully recyclable. "The most exposure scooters have received [on city streets] has been as rentals, but that business is completely flawed," explains Brown. "Rental scooters have a very short lifespan before hitting the landfill, and the environmental cost of shifting them around town in gas-guzzling trucks is high." He believes that by creating non-disposable scooters designed for ownership instead of rental, they can limit environmental impact. "Unfortunately, the industry is currently led by companies that operate on the build-and-forget model. We know that ownership goes well beyond the sale, and we have made sure TAUR is easily serviceable over the long term." Brown suggests that at some point, every product reaches its end, so he and the team have pushed to significantly reduce its use of plastics, choosing to design around aluminum due to its "infinite recyclability." 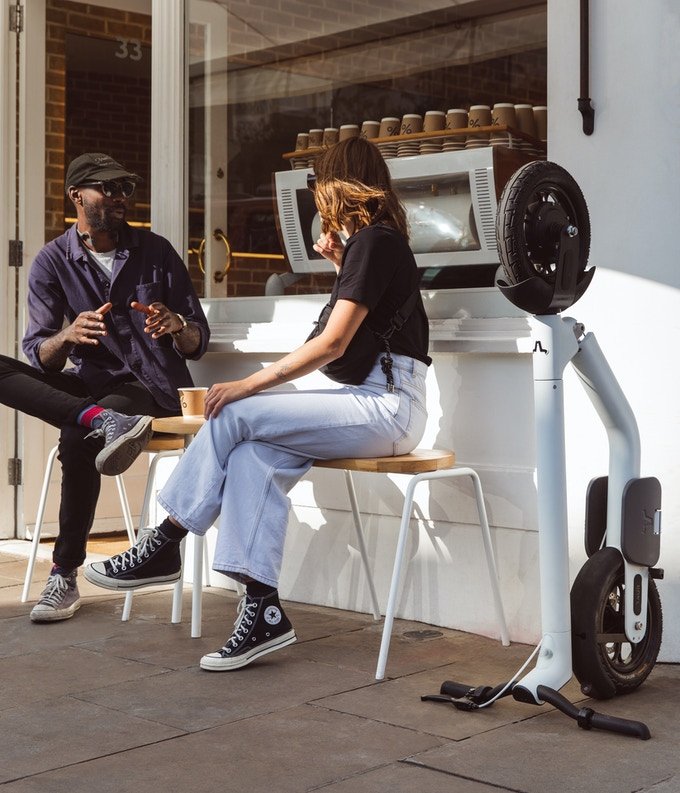 Born with a need for speed

"Personally, I've been designing and inventing products for a while, and as a creator, you don't really switch off," jokes Brown, noting that TAUR came from hours, if not decades, spent on the road, imagining a more sustainable transportation option. As a child, he was "obsessed with anything that moves," a fascination with cars later shifting towards more environmentally-sustainable options like gearless bicycle transmissions, electric unicycles, and, of course, scooters. But even after specializing in electric vehicles for years, it still took a certain amount of trial and error to get TAUR just right. "Scooters aren't like everyday household items, where you have decades of examples to learn from. You really have to unpick how people fit them into their lives," he says, explaining that the team found its most significant insights came from in-depth interviews with friends and others within their co-working space. "When you start something, you need to know that you can make an impact in that sector, and it took a couple of months of head-scratching to try to figure out what we could do that was not just different, but good different," he says. "The ultimate challenge as a team was less to create a capable model and more for TAUR to continually delight and make you think 'they thought about everything.'" 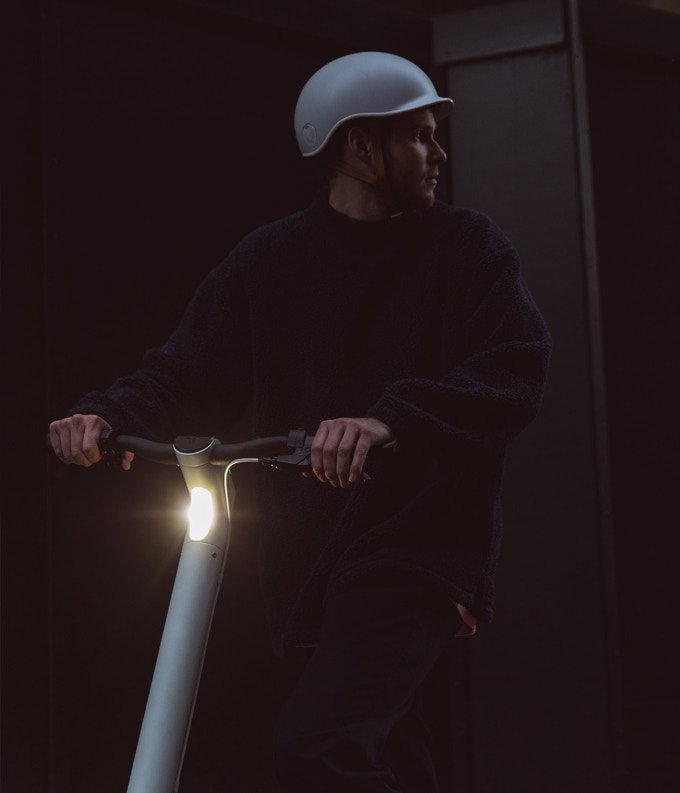 We all deserve a better commute

TAUR isn't trying to reinvent the wheel so much as it is attempting to smooth out its jagged edges. "We're seeking to appeal to those who haven't realized scooters are an option and haven't truly realized that they don't have to deal with a frustrating commute every day. That they can do something that is enjoyable, and that is aspirational or exciting and feels refined to the level that a lot of the products that they love are as well."

On a more personal level, Brown explains that he rode to work for years on electric devices, but that still doesn't make him an expert. "Not everyone's commute is the same, and not everyone's wants or desires are the same. TAUR wasn't designed for me. I'm a speed demon!" he jokes. "It was designed for all those things that you feel like you need on a day-to-day basis—and the freedom that comes with that is pretty cool."

TAUR Wants To Make Your Morning Commute a Joy