A Pair of Flying Slippers: Phil Patton reviews the Buckminster Fuller exhibition at the Whitney 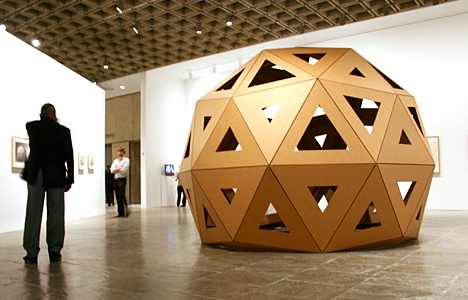 "An exhibition is a verb," writes Whitney museum director Adam Weinberg bravely, in his introduction to the catalog of the museum's Buckminster Fuller show, Starting with the Universe.

He is echoing Fuller's own famous phrase "I seem to be a verb." But in fact, a museum show is necessarily more like an arrangement of nouns. And this one includes nouns like drawings, photographs, and models, with a few verbs of video of Fuller talking.

"His vision is difficult to approximate and present, much less encompass in an exhibition," Weinberg continues. The show does the difficult ably enough, providing a good chronological sample, thoughtfully arranged.

If Fuller saw himself as a verb it may be because his life was dominated more by activity than artifact. He truly found himself in his presentations and lectures, from his first talks to a handful of people in Greenwich Village salons to the vast college audiences he drew in his old age. His real skills were "synergistic," all right, but it was the synergy of networking, propaganda and performance.
The show's title suggests the thesis of the curators, K. Michael Hays and Dana Miller, that Fuller's ideas--not buildings or designs--are paramount in his work. Fuller said that he began with what he called "energy systems" and that the designs and artifacts he ended up with were quite incidental to the wider goal of exploring those patterns. He created the trademark geodesic dome and houses like the Dymaxion, stacked on its central core, or the post-war Wichita house, which resembled a residence for the robot Gort from the film The Day the Earth Stood Still. He patented and built three examples of the Dymaxion car. But they were simply sketches of the wider concepts. "I could have ended up with a pair of flying slippers," Fuller said. 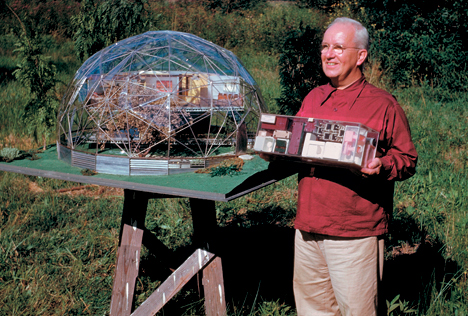 If Fuller saw himself as a verb it may be because his life was dominated more by activity than artifact. He truly found himself in his presentations and lectures, from his first talks to a handful of people in Greenwich Village salons to the vast college audiences he drew in his old age. His real skills were "synergistic," all right, but it was the synergy of networking, propaganda and performance.

Fuller was an amateur engineer, architect, mapmaker and auto designer but a professional marketer: his great skill was in selling himself and his ideas, always at least ten per cent crackpot, to audiences from academia, media, business, and counterculture. Today, a huge fan base preaches various denominations of Buckydom, the appeal nurtured in the crises of the Depression, war, cold war and energy shortages revived by the latest millennial crises of global warming. Fuller's message is quicksilver fluid and elusive. The visions of possible futures he offered were equally powerful for many varied audiences and in every decade from the thirties to the seventies. 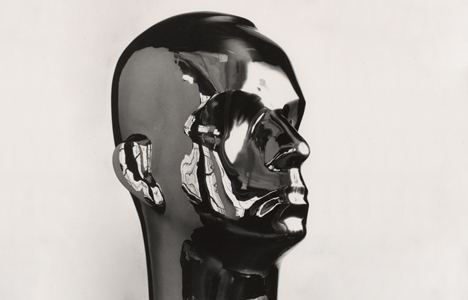 The most meaningful artifact in the show may be the mirrored bust of Bucky by Isamu Noguchi. (The Noguchi Museum mounted the important Best of Friends exhibition about the relationship between and work of the two, in 2006; the pair were drinking buddies in Greenwich Village, at Romany Marie's famous cafÃ©, which Fuller redecorated with silver paint.) The mirrored surface suggests the nature of Fuller's appeal: Everyone saw something of themselves in Fuller. His ideas mirrored their ideals, his designs reflected their dreams.

Fuller was born of a family with deep roots in New England. His ancestors included Margaret Fuller, who co-founded The Dial with Emerson. He became a latter-day off-shoot of the Transcendalists, a modern-day Thoreau who planned simple life in a soybean silo instead of a cabin, and his architecture carried the mystic overtones of Orson Fowler's octagon house movement of the same period.

But he added to this story a compelling back-story: he went to Harvard, like earlier generations of Fullers, but was kicked out--twice. A midlife crisis in 1927, he claimed, left him close to suicide. Instead, he said, he determined to turn his life into "an experiment to find what a single individual can contribute to changing the world and benefiting all humanity." He parked his wife in Long Island and dreamed up a core set of ideas using made-up terms like 4D and Dymaxion. (There's that modern sense of marketing and self-promotion.)

The mirrored surface of the Noguchi bust suggests the nature of Fuller's appeal: Everyone saw something of themselves in Fuller. His ideas mirrored their ideals, his designs reflected their dreams.

For me, one of the revelations of the Whitney show is to see how much energy Fuller devoted to designing logos. There are many sketches of them, but one that caught my eye was the flying fish symbol with the word Dymaxion. I had seen that one before, in photos of the jump-suited workers at the Dymaxion car factory. (In fact, the pinprick trackings of the image and letters suggest that this was the sketch transferred to fabric for the overalls of the workers.) 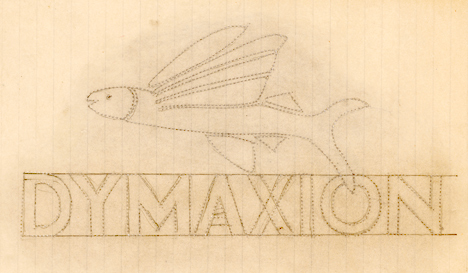 Indeed, there are several efforts to create a neat "4D" logo. For Fuller, 4d stood for the fourth dimension, time, and his car was called the "4d Transport." It was to be part aircraft, part automobile, and was inspired by the need to get to and from the Dymaxion houses he planned to build in isolated areas. Fuller imagined these houses delivered to their sites by dirigible--the lot blasted flat by dropping a bomb--with the structure erected around a central mast. They would contain their own power generation and recycling equipment.

The Dymaxion car, whose only surviving example is on the Whitney's first floor, represented Fuller's effort to reinvent American industry--Fuller's technological New Deal. He began work in the factory to produce it, an old Locomobile automobile plant in Bridgeport, Connecticut, on the very day in March 1933 when FDR delivered his "nothing to fear but fear itself" inaugural address. 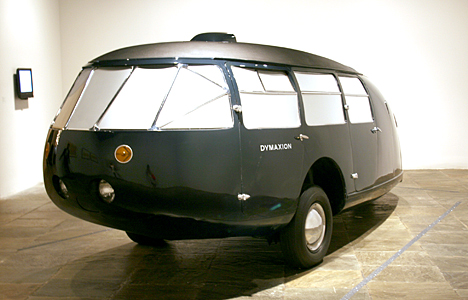 That summer, when the workers, wearing the flying fish logo, rolled out the first finished car, thousands showed up, including curious celebrities. Diego Rivera and H.G. Welles were photographed by the car. The Dymaxion car became his calling card. In February, 1934, Fuller, Noguchi and a girlfriend, along with Clare Booth, (former Vanity Fair editor, soon to marry Henry Luce, founder of Time magazine), set out on what was recorded as an epic drive through Connecticut. They stopped to visit playwright Thornton Wilder and ended at the premiere of Gertrude Stein and Virgil Thompson's opera, Three Saints in Four Acts, at the Hartford Athenaum. (Fuller, an improbable Lothario, counted Ms Booth among his liaisons, according to her close friend Wilfred Sheed.) Fuller, a not tall man often seen in a white suit and resembling a sort of stubby version of Harry Truman, charmed women. He wooed generals of the Marines and captains of industry; Henry Luce of Fortune, Life and Time bought into him, as would the Whole Earth Catalog and the collective Ant Farm. 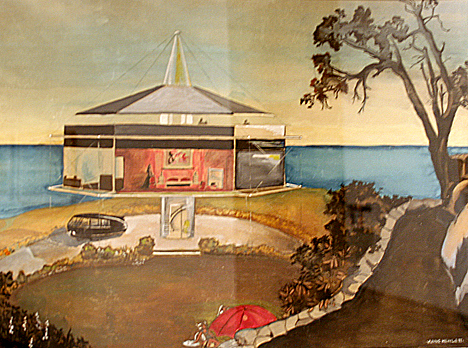 Today, a huge fan base preaches various denominations of Buckydom, the appeal nurtured in the crises of the Depression, war, cold war and energy shortages revived by the latest millennial crises of global warming.

His maps in Life magazine, in 1943, lent understanding of true globalism to the likes of Hugh Kenner, who, thirty years later, published a book ranking Fuller with T.S. Eliot, James Joyce and Picasso. Fuller appeared on the cover of Time, was profiled in The New Yorker and interviewed by Playboy. He almost persuaded Walter O'Malley, owner of the Brooklyn Dodgers, to build a domed stadium instead of moving them to Los Angeles. His high-water mark came in 1967, when one of his geodesic domes was chosen as the U.S. pavilion at the Montreal World's Fair. It sat close to Moshe Safdie's Habitat housing complex and housed an Apollo command module. The future never gleamed so brightly again.

While he ran wild in the Village, he had parked his wife on Long Island. (She said she did not mind.) A poignant watercolor by Anne Hewlett Fuller included in the Whitney show depicts a cozy looking Dymaxion house and Dymaxion car with family members picnicing on the lawn, with a calm body of water behind. (Long Island Sound?) It was a wishful view of a combination between the visionary and the ordinary that Fuller could never have.

- - - - - Phil Patton is the author of many books on design and culture. He writes for the New York Times, ID, Departures and other magazines and is on the faculty of the new Design Criticism program at SVA.

The Whitney exhibition continues until September, but needs to be supplemented by reading the catalog, checking out the PBS Modern Masters Series, Thinking Out Loud; http://www.thirteen.org/bucky/film.html, and reading Hugh Kenner's Bucky--although I may have bought the Strand's last hardback copy earlier this summer.

This has been Bucky season, thanks to a generous calendar of Bucky-related films, panels and other activities of the Buckminster Fuller Challenge Award at the Center for Architecture. (The exhibits include a Fuller Fly's Eye Dome--a kind of fiberglass yurt--and drawings and documents making up the Buckminster Fuller Dymaxion Study Center. The Whitney plans a symposium in September; the Museum of Contemporary Art in Chicago will mount its Bucky show next year.