It's time for a bicycle revolution in the United States. The country needs to catch up with most of the world in moving towards pedal-powered mobility for a better climate, more equality and increased public health. Hopefully, new Transport Secretary Pete Buttigieg will remember the lessons learned from when he visited Copenhagen and Amsterdam in 2016 - the world's bicycle capitals.

Few Americans feel comfortable cycling around in traffic in general, especially on raggedy streets or in sprawling cities. Generally speaking, American car-centric culture still looks down on bike transportation. Studies have shown that cycling has massive societal benefits. It diminishes health problems linked to pollution and sedentary lifestyles, it reduces air pollution and thereby global warming, and increases productivity by reducing time stuck in traffic. It betters the economy of local, often minority-owned, shops because cycling lanes make it safer and easier to shop in dense neighborhoods. Meanwhile, it promotes an equitable culture because bikes are far less expensive than other means of transportation and cycling infrastructure is by itself cheaper to build.

To better promote the idea of cycling as transportation, there are two avenues to pursue. This first focuses on political policies, such as tax-breaks, bike lanes, road pricing and so forth, and the second is a design approach, focusing on desirability, usage and cultural integration. As a bicycle designer, I believe the latter forms the foundation for the former to succeed. After all, bikes work without bike lanes, not vice-versa. If you want people to choose the bike, then it needs to be the attractive option. The bicycle has to become something that is embraced for its qualities and not something forced upon the commuter. In my work I follow a set of design principles to create bikes with the goal of making them the attractive option over cars in cities. These four principles are simplicity, durability, visibility and integration.

Keep it simple Simplicity brings aesthetic quality. Bikes in the cities need to be at least as simple as cars. Imagine a car that has 16 or more gears that need to be properly combined between two stick shifts for efficient use. You would not put up with it in a car and neither should you for a bike. A city bike essentially needs no combination gears if any at all and little or no suspension. It needs to be simple to use, convenient and pleasing to the eye. Less parts and attachments reduces weight, costs and maintenance. 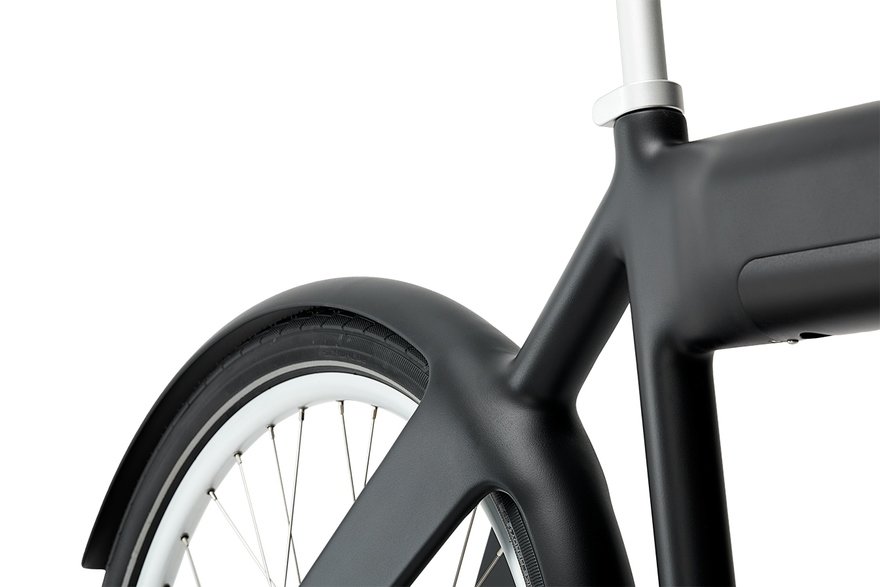 Example of mudguards integrated in the frame on the Biomega OKO

Make it durable If your bike is to become your primary means of transportation, you don't want to bring it to the bike mechanic very often, if at all. Curbs, potholes and the weather all bring wear and tear to your bike, but proper durable bike design goes a long way to keeping the bike away from the mechanic. Simplifying the bike design with fewer parts is the first step. For a commuting bike, you don't need super advanced nor lightweight gears and materials optimised for racing. High-end parts are light, but also easy to break and quick to wear out. An urban/commuter bike can instead use simple, cheap and sturdy parts to make it strong. Ironically, a better city bike could come across as inferior if only judged on its parts. A simple gear hub with steel parts as well as coaster or hub breaks will seem to be the cheap option. But they might all make it better and more durable. 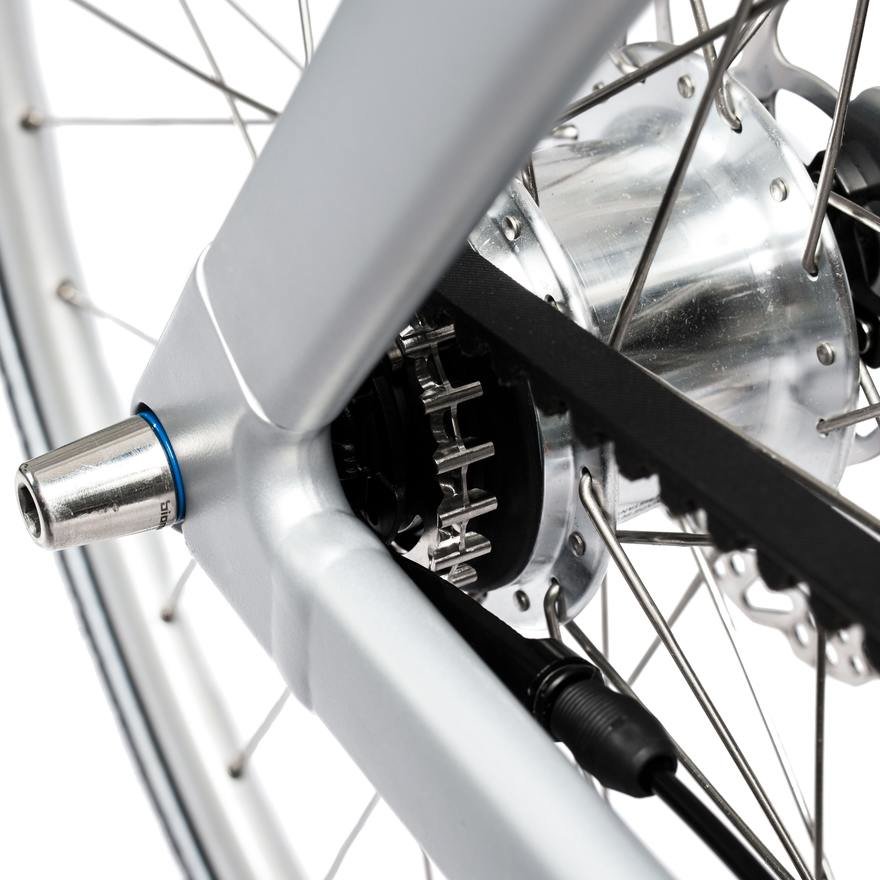 Build it to be seen If it's beautiful it will be more noticeable. Making it appreciable is important during daylight hours. For night-time, make sure that the bike is made to be seen and for the rider to see in the dark. You actually need to see where you are going and be detectable to make sure nobody drives into you. Ideally lighting and visibility should be an integral part of the bike design itself. There are many great products out there that increase visibility, yet close to none, including my own designs, are an integrated part of the bike. One reason for this is that manufacturers don't mind replacing a bike light, but an entire frame with a light in it is another, expensive story. Another challenge is the bike industry business models. The big bucks in the industry are found in the aftermarket – with after sale products, like bike lights. Bike stores may not be keen to market bikes that come with integrated lighting out of fear of losing a revenue source. For this reason, the question of designing for visibility is something with huge design potential and many untapped opportunities. Why not integrate a laser light signaling on the bike? One that lights up many yards ahead to warn right turning traffic that you are coming. The key thing about visibility is getting noticed and designing something awesome that makes people's heads turn with envy. 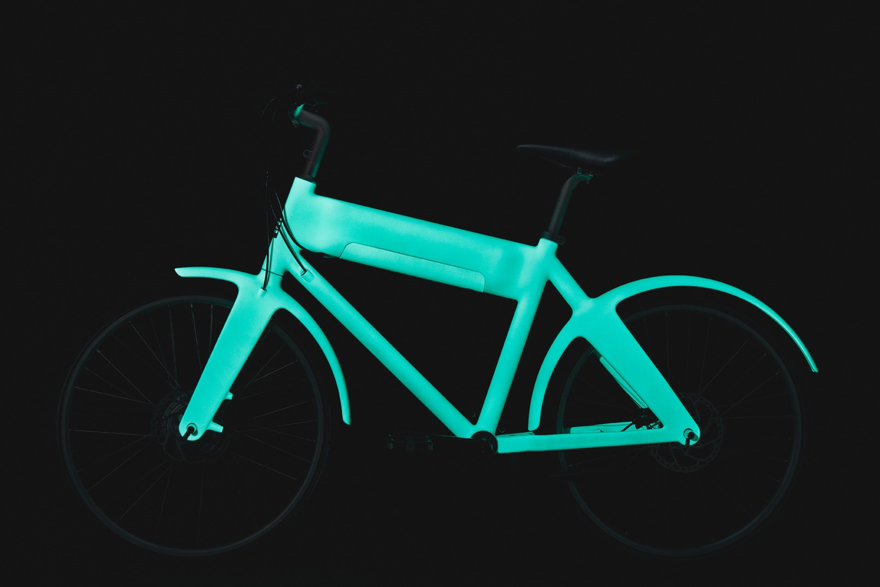 Do integrate This might be the most important principle. The bike industry is dominated by parts makers. Customers will compare which Shimano or SRAM group set you have on your bike. They won't analyze or test if these parts work well with the purpose and general function of the bike. Bike parts need to work properly together and for the specific usage of that particular bike. Cables, gears, electric parts, lights, etc. need to be specifically designed or sourced for integration, and that will make them last too. Forming a holistic object makes it more discernible and easier to build a product identity around, with all the market benefits this entails.

Taken together, these four principles guide the design of a bike as a singular object created for a specific purpose, to create something that can measure up and compete with rival modes of transportation such as a car. An off the shelf car is one singular, holistic object. A car looks like its brand. You can tell a BMW, Toyota, Tesla, or whatever car brand apart, but you almost can't tell bike brands apart. For the bike design to become an object of desire and attraction, and a proper lifestyle choice that can compete with cars it needs to be a purposeful, beautiful, and distinguishable product.

Using cars for everyday transportation never made sense in densely populated urban centers. As much as we need bike lanes to win back the city, we need bike makers to design and market their products in ways that resonate with consumers. Tilting the balance of transportation modes toward bikes will help us all breathe some fresh air, see kids playing in the streets and hear the birds chirp again.