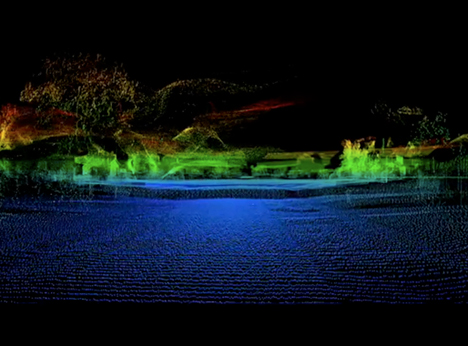 Cameras? Sooooo 2007! Ever the innovators, Radiohead is breaking new ground with their music video for In Rainbows' "House of Cards" by forgoing the camera entirely and using Geometric Infomatics and Velodyne Lidar (whhaaa??) technologies to create the visuals. Quick translation:

"The Geometric Informatics scanning system employs structured light to capture detailed 3D images at close proximity, and was used to render the performances of Radiohead's Thom Yorke, the female lead, and several partygoers. The Velodyne Lidar system uses multiple lasers to capture large environments in 3D, in this case 64 lasers rotating and shooting in a 360 degree radius 900 times per minute, capturing all of the exterior scenes and wide party shots."

Huh. Not bad. Especially when the data used to create this video will be shared with fans for all our ravey-mixin' pleasure! (The amazing glow-stick designs that will come out of this...) But seriously, we've gotta hand it to 'em, Radiohead is forging a path for open-source creatives. This recent video coup, directed by James Frost, isn't out yet, but you can catch it here when it launches later today. In the meantime, make sure to check out Richard, the Tour Production Manager's, post about LED lighting for performances at Radiohead.com, then feast on some stellar stills after the jump...