Embracing radical designs can reshape our ideas of what is possible

To mitigate emissions as part of adapting to the climate crisis, we've yet to solve how to create sustainable cross-continental travel and transport solutions. The pandemic has only highlighted that we need innovative solutions for long distance travel. Compared to urban transport, which with the right support could be made emission-free fairly quickly, it will be almost a decade before technology improvements (green fuels, batteries, solar powered planes) will allow airplanes to roam the skies without polluting at the levels they do today. That is, of course, if we believe that incremental improvements to existing designs is the only way forward.

Another approach is to look at clean sheet designs. It is often assumed that a clean sheet approach entails further development of validated technology or radically new tech. In the case of air travel, the obvious examples would respectively be regular airplanes with electro fuels and eVTOLs (electric vertical take-off and landing). Over the years, however, we've seen a number of alternative designs for air travel, which weren't necessarily discarded for objective reasons. Many of these ideas might have been ahead of their time, and that time could be coming very soon. Updated versions of some historical ideas could soon be feasible, or more likely, parts of them could be appropriated in new combinations to shape new typologies.

Combining ideas or clashing them is actually a very successful technique for ideation and innovation. The ideas below illustrate this approach (ignoring for now the pitfalls, challenges and expensive development), if one were to bet or invest in new alternatives to air travel.

Helicopter Plus EV Currently, I think the big attempt at a paradigm shift is happening by merging the typologies of a helicopter and the electric car in some way. The eVTOLs are a result of different techs bundled together. They surfaced when distributed electric motors became efficient enough to compete with central motors. They still can't compete with a big multi-seat airplane on many levels, but they could possibly pave the way for a different vision and new regulation.

Model of the Terrafugia Transition 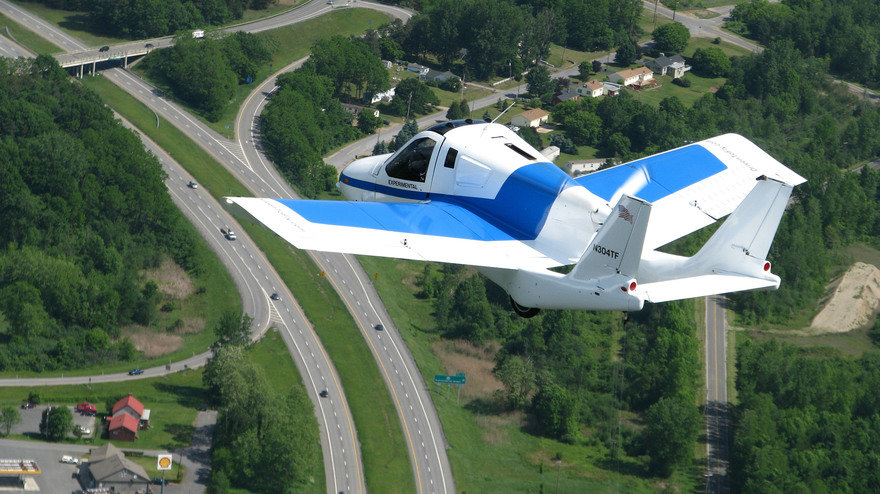 Bus Plus Plane Many are familiar with tiltwing aircrafts; most notably the Bell-Boeing V-22 Osprey. By tilting wings vertically instead it is possible to create flying busses that could drive on normal roads. I was actually part of the team that designed the Terrafugia Transition which is certified as a truck as well as a plane. It has folding wings. The interesting part of merging busses and planes is that two sets of pre-existing infrastructures could converge: Roads and airports. 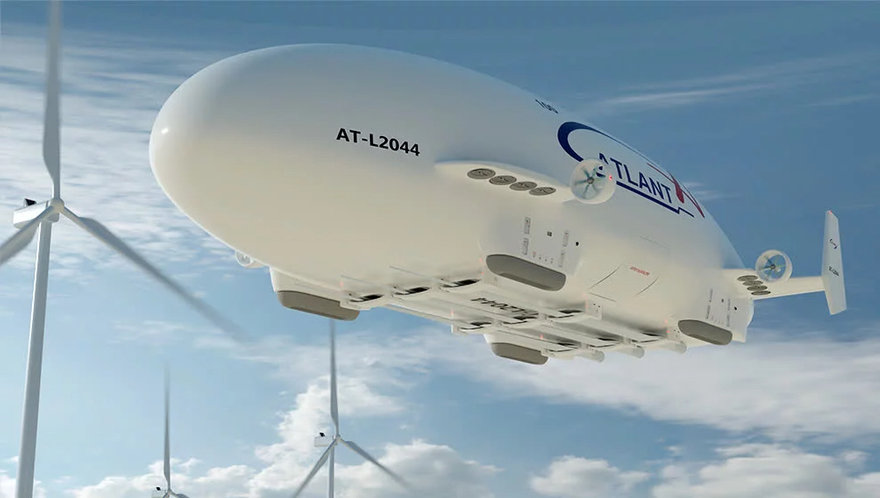 Balloon Plus Plane A low hanging fruit is to reconsider the commercial use of the airship. Although largely discontinued as a means of passenger transport after the Hindenburg disaster, there is an argument to be made that replacing hydrogen with helium, will open many new possibilities for the airship. Even hydrogen could be safely compartmentalized to avoid a comparable disaster. Where consumers usually choose planes for their speed, slower transport is steadily becoming more popular with the slow living movement, nostalgia and green consciousness. Airships could also replace cruise ships and even commercial heavy lifting to areas with low infrastructure without much redesign. You can already pre-order an airship cruise to the North Pole. And some of the largest windmill manufacturers collaborate on having airships transport windmills. The biggest windmill today, The Haliade-X offshore turbine has a 220-meter rotor, and a 107-meter blade. These are almost impossible to transport on normal roads and moving from factory to wind farm poses a significant challenge, which could be solved by the airship.

Lighter than air vessels, definitely seem to be a bet for the future and probably the fastest way to zero emission flight. The Airlander 10 from Hybrid Air Vehicle, a new type of hybrid airship is already built, and ready for commercial roll-out.

Plane Plus Train If we're not going to fly, and speed is of importance, the train needs a renaissance. Not just as a train, but a vehicle using the best designs and knowledge to travel at high-speed covering long distances. The Hyperloop famously revived the vactrain: A concept proposed in 'Paris in the Twentieth Century', an old science fiction novel by Jules Verne. Verne imagined tube trains stretching across the Atlantic, and countless others have imagined combining magnets, vacuum tubes and trains as alternatives to aviation.

Airship Plus Train My design team and I at Manyone designed the Aeroslider, which is basically a bullet-shaped airship (using helium to make it lighter) propelled at up to 800 km/h by maglev technology. It is imagined as a towering circle-line subway connecting Europe, Africa and Asia. 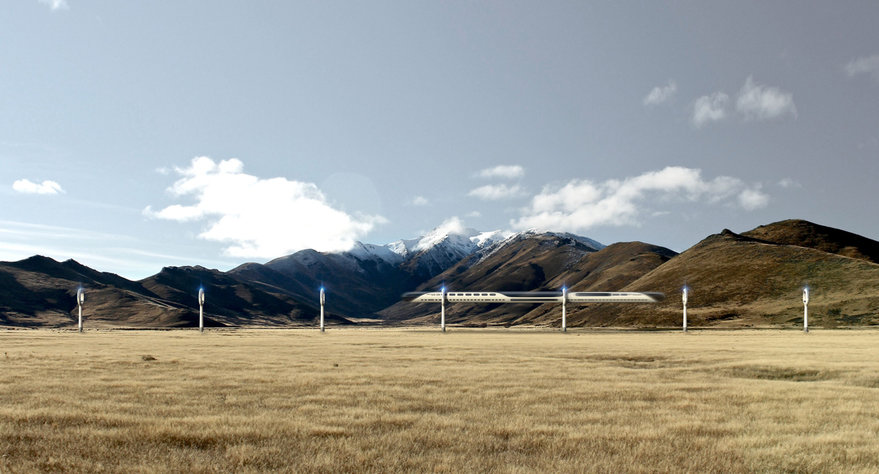 Helicopter Plus Plane Then there's a host of rotorcrafts, which are waiting to be explored and repurposed. There is the Fanwing that mixes a fixed wing and a sort of fan. The Flettner plane resembles it, but it creates lift by using the magnus effect. And ships are also being made using the Flettner technology to propel them to save energy.

There is also an aircraft cyclorotor – with a type of rotor wing that looks like the ones on a big Mississippi steam boat. It is capable of vertical take off and landing like a helicopter, while having some of the advantages of a fixed-wing aircraft. It remains experimental for now, but with the right backing….

Some other rotorcrafts like the autogyro and gyrodyne are currently being recycled in eVTOLs . 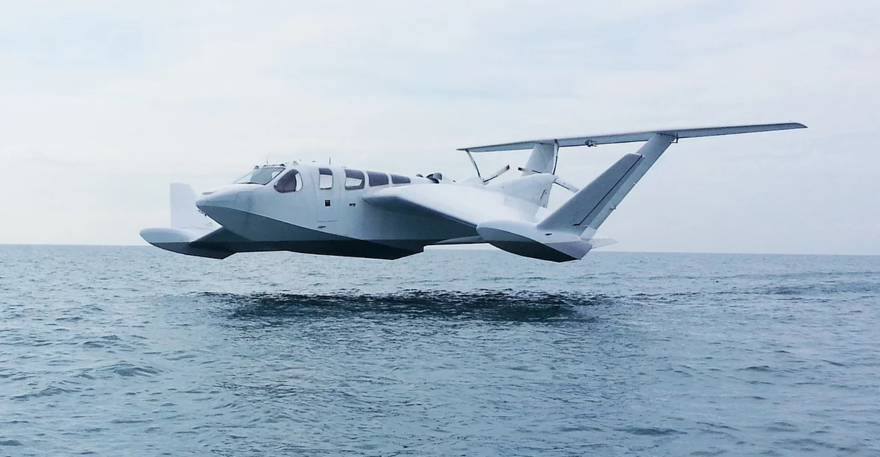 Boat Plus Plane Finally, there is the Ekranoplan or Ground Effect Vehicle (GEV). Actually, this was a design pioneered by the Soviet Union, and it was almost forgotten outside of Russia - except maybe for the infamous Lun-class ekranoplan. The Ekranoplan is a plane that flies between 5 and 30 meters above ground, getting additional lift from the aerodynamic interaction between the wing and the surface. It is actually classified as a boat, but it could easily stand in for planes for long distance travel where the geography permits. One such route is the Sea Wolf Express, which soon could connect Tallinn and Helsinki in just 30 minutes. The Iranians also use them for their fleet. The benefits are obvious, an ekranoplan is fast and roughly twice as fuel-efficient as a plane and it needs limited infrastructure. DARPA and Boeing are exploring Ground Effect Vehicles and a specialized manufacturer in Russia still makes them. Hovercrafts are in this category too.

Imagine what could be done with the above ideas with the right use, investment, and perseverance? Initially, they might seem off-the-wall, but so did all flying objects before they worked. Investors are betting on this sector. In the past five years, the dominant electric aviation start-ups globally have raised more than $1.2 billion. JetBlue Airways indirectly invested $250 million in electric aviation start-ups over the last three years, and Airbus, Intel, Toyota Motor, Daimler, and Geely Automobile are crowding into the space. We might witness a renaissance of air travel, and experience brand new vehicles of travel within the next decade if only we dare challenge the status quo.