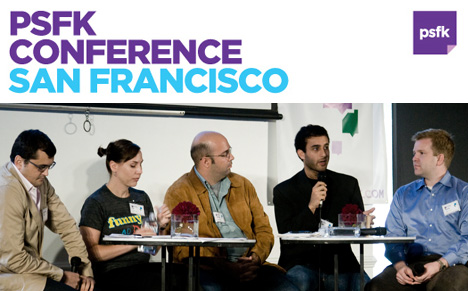 Today's 2008 PSFK Conference in San Francisco got some smiles from the morning crowd with a panel gathered to toot the horn of said city for a good 40 minutes. So what keeps SF, whose footprint is microscopic compared to other global hubs, on the innovation forefront? Amit Gupta (Jelly, Photojojo, CommandShift3) argues it's exactly that--being good at being on the forefront. "L.A. exports movies, New York exports hipness, and we export startups." Liz Dunn (Funny or Die) says the city holds its own, not despite, but thanks to its bite-sizedness. "When a city has a lot of money and power at stake, change is very scary. When you're small and have nothing to lose like us, you can just freestyle it."

Then there's this phenomenon of community where people here can't seem to get enough of each other and build tools to stay together online and in (real not Second) life to ensure their connectedness. "There's water and electricity and Twitter," chuckled wise guy Jeremy Townsend (Ghetto Gourmet), as he pointed out how Bay Area residents treat access to communication and collaboration as a vital utility.

The best quips were blurted when comparing SF to the "other" cities: "L.A. is filled with common people who attempt to appear presumptuous and SF has a bunch of presumptuous people who try hard to be seen as common," noted Townsend. Dunn elaborated by explaining that "L.A. gets all the beautiful people, New York has all the rich people, and we're the nerds left over who said 'well we didn't want to hang out with them anyway.'" True that. But in the end, the general attitude of always wanting to make something better and embracing the strange and unknown, which feeds the city's notorious tie-dyed, hippie-dippie rep, is a true indicator that success and leadership can certainly be had while smoking some optimism.