Now You Can Hang Sunshine On Your Windowsill

A personal sun you can hang inside your home—that was the bold idea behind celebrated Dutch "solar designer" Marjan van Aubel's latest creation, Sunne, a portable light source designed to evoke and even mimic the sun's waxing and waning glow. The project, now available on Kickstarter through April 2, is equipped with photovoltaic cells and an integrated battery that allow it to accumulate and store enough energy throughout the day to illuminate a standard room, but is compact enough to fit into the tiniest of city apartments.

Van Aubel is known for bringing an elegant and accessible approach to sustainable technology, earning the 2015 London Design Medal for Emerging Talent, and appearing at the V&A, the Stedelijk Museum Amsterdam, and the MoMA. "I am fascinated by how solar energy works," explains the creator, who believes that, in the future, most of our homes and offices will be able to run primarily on solar power. "That a surface, when exposed to light, is able to create energy through photons from the sun's rays and then activate the electronics—in a material that utilizes photoelectric effect—is amazing," she exclaims. "Sunlight is free and available to everyone, and we receive it in abundance—it's the source of energy that powers all life on our Earth!" And why shouldn't we all be able to enjoy it in the comfort of our living rooms? 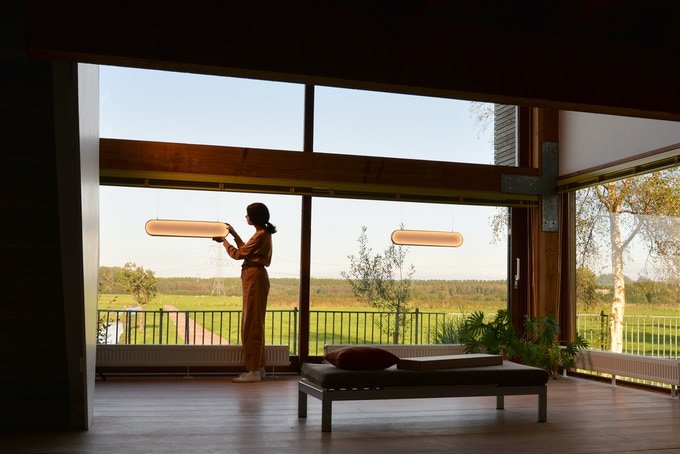 Beyond the blue panel

"I find solar panels beautiful, but the way they are integrated now needs some improvement," says van Aubel, referring to the often bulky look of rooftop solar panels. The good news is that new technologies and methods of utilizing solar have led to countless design options, among them, direct printing on solar panels to produce a range of colors and integrating transparent and flexible materials onto almost any surface. "Many see solar simply as a technology—the panels on the roof that decrease the number on your energy bill. But solar has come a long way since the 'blue panels,'" she continues, pointing out that solar has quickly become a cheap source of energy globally. "Adding this aesthetic component, especially if we intend to make solar a more natural part of our environment, is important," she asserts, hoping that one day solar panels will no longer be something we "hide" within architecture and design, but will become an essential feature of a building. "Energy is such a basic need, so we need to work on how we would like to live with solar—and that is through design." 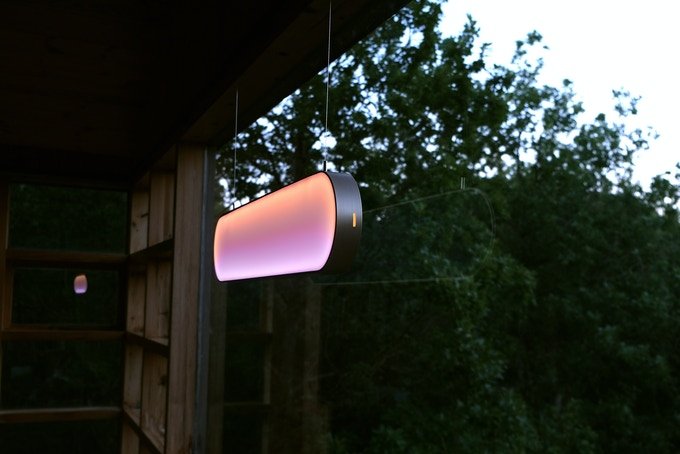 The shape of things to come

Unlike other hanging lamps, Sunne doesn't require plugs or external electricals to run, enabling its designers to become more creative with shape, in this case reducing it to a simple oblong suspended from two steel wires, meant to evoke the sun on the horizon. Since Sunne is hung inside, it receives less power than traditional solar roof panels. But, ingeniously, the window-facing side is outfitted with SunPower Solar Cells, the same high-strength panels that power the Lightyear One, the world's first high-efficiency solar-powered car. These panels are bolstered by LEDs, with the battery and printed circuit board placed behind them, all of which van Aubel developed in collaboration with The Energy Research Centre of the Netherlands. The "pattern" of these solar cells captures sunlight and recreates it in a gradient of intensity, from Sunne Rise to Sunne Light to Sunne Set, imitating different gradients of the sun throughout the day.

"I like symmetry," explains van Aubel, referencing the oblong design of Sunne. "When something is symmetrical, we don't question it, and we can look at the things that matter," she explains. Sunne's unique design enables it to double as an objet d'art as well as a practical light source. To develop the horizontal structure, van Aubel started with a simple, sun-inspired circle, later elongating it with ten consecutive circles. "The shape allows for enough solar panels to be installed that Sunne is ensured to perform well, reflecting the horizon where the sun sets for the night, which is also the moment when the light of Sunne will start to shine." Sunne's settings can then be changed by adjusting a sensor on the lamp's anodized aluminum frame. Van Aubel and her team are also planning to develop an app that would display information about the battery level and how much light is received by the solar cells in order to position the lamp for optimal harvesting conditions. 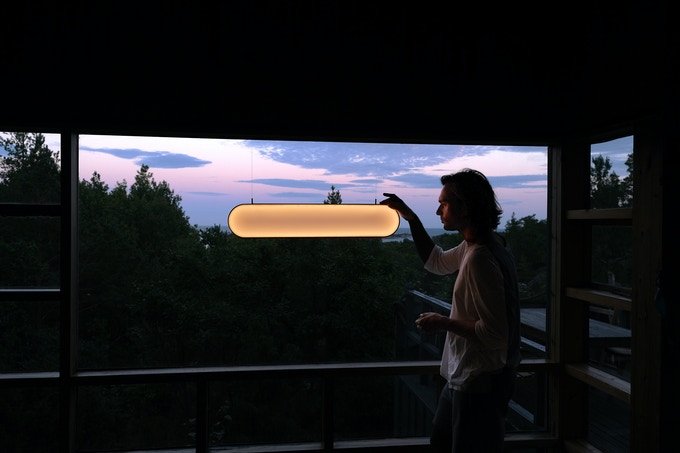 "There are so many more applications you can think of in which you can incorporate solar panels," according to van Aubel. "I see every surface as an opportunity to harvest the sun's energy." Currently, at the top of her list is the production of a set of "aesthetic blinds" that shades an indoor space during the day while harnessing the sun's energy, but she is also considering a range of colorful solar-designed products. "The main focus will always be on the balance between function and aesthetics, smart and beautiful autonomous objects—a way that we can celebrate the sun and use it, but not be harmed by its rays. Just imagine a future where all objects are autonomous and can power themselves!"

SUNNE is live on Kickstarter through April 2, 2021.

Now You Can Hang Sunshine On Your Windowsill