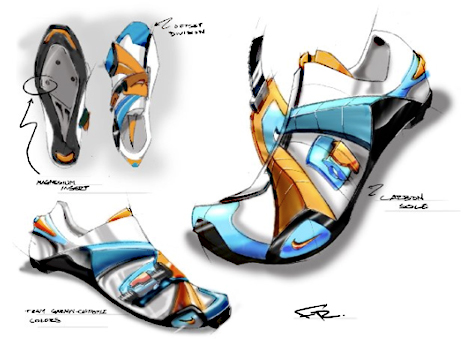 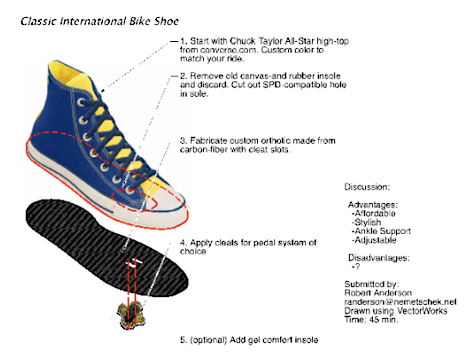 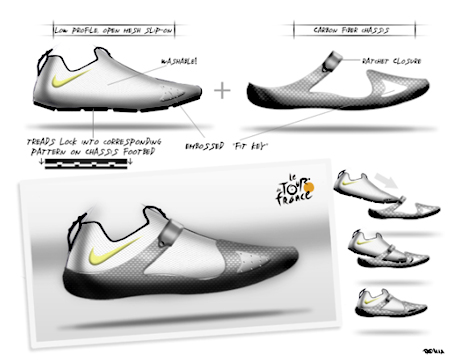 Carlos Sastre just spent 3 weeks of his life cycling over 3500 Kilometers (2200 Miles) to win the 2008 Tour de France. How better to celebrate with him than to spend an hour to design a spiffy new cycling shoe? That's right, this month we asked Core readers to design the next greatest cycling shoe. We even got Bill Cass to join the judging crew. He works for Nike designing cycling shoes for guys like Mark Cavendish and some guy named Lance Something-or-other. The results should make any pro proud.

Honorable Mention: Barloworld Cycling Shoe and Crampon, by tbaker (after the jump)

Get the inside scoop on Bill Cass' thoughts on the next page... 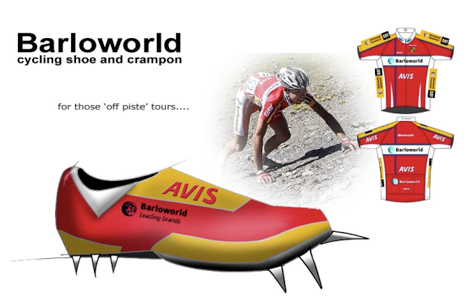 To start off there are too many good choices. As a rider and racer with many years under my belt and 10 odd bikes in my basement I can see reasons for all of these. I will have to base my decision on those I can actually see folks spinning down the road in. The most important thing I think about when designing product for an athlete is that it actually works. Styling is important but it needs to work exceptionally well first and foremost. My esthetic decisions start there. If it looks good but there is only a vague reference to function I wonâ€™t pick it. That being said here are my choices.

Garmin-Chipotle American team shoe: I can imagine this shoe, once the closure system and fit are worked out, flying down the roads at the Tour de France. I like the thought of using Flywire technology although the rendering doesnâ€™t really show that. I would try to keep the bulk down and make sure there is enough support at the top of the foot. Good team color possibilities too.

Classic International Bike Shoe: I could have used this shoe this morning. Perfect for all the fixed gear riders weaving there way through a downtown near you. Simple, Stylish and Functional. Watch out for those laces. A place to tuck them under a flap or tongue top would be a nice touch.

Padilla Shoe: Believe it or not, some folks do stop for ice cream or actually need to walk once they get where they are going. This would be a great shoe to have in French Alpes while following the Tour. At some point on your way to find the perfect viewing spot the Gendarmes are going to make you get off your bike and walk. As long as this is a light shoe you can ride 140 kms in you have something, Points off for putting the swoosh on backwards. Leave the swoosh alone. It just isnâ€™t â€œcheekyâ€ anymore and everyone with a pencil, pencil or mouse thinks it is a new idea. Plus the swoosh police wouldnâ€™t let it fly. (they exist)

Barloworld Cycling Shoe and Crampon: Made me laugh out loud. I would have moved up on the list if it had mentioned that the fangs only come out once the rider disconnects from his bike or that it had a surfboard like leash that keeps your bike from pinwheeling a km down the mountain. No 25 minute wait for the team car either.

Thanks Bill! Check out all the entries here.