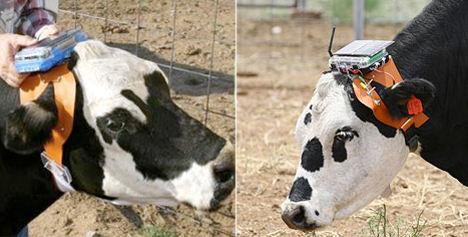 Cows and more cows! 2008 is turning out to be the year of bovine-methane-manipulation (poor things!) But things might be looking up for our fat-boned friends with the introduction of the Ear-A-Round, stereo earphones that transmit sounds directly into the cow's ears to guide its movement. Researchers are currently working on developing the prototype which has, as a goal, to "give farmers a much finer control of pastures, finer management of where animals are and a better use of the land," not to mention finding "out what the animals do all day." (Ahem....rock out to Madonna?).

Here are some choice sound bites from the lab:

The technology won't eliminate the need for cowboys; instead, the focus is to shift their labor from physical to cognitive.

Ranchers and cowhands will no longer have to spend time building and repairing fences.

[Lead researcher Dean M. Anderson] has sung his song during training exercises to get the animals to move. If they pause for longer than a few seconds, he will use the song cue to get them moving again.

If the sound cues fail, the headset can give a small electrical shock to move unresponsive cows.

[Andersen and his partner Daniela Rus] also plan to test other sounds as possible cues, including naturally repulsive sounds for cows such as barking dogs and hissing snakes.

Oh...you poor cows...What will they think of next?