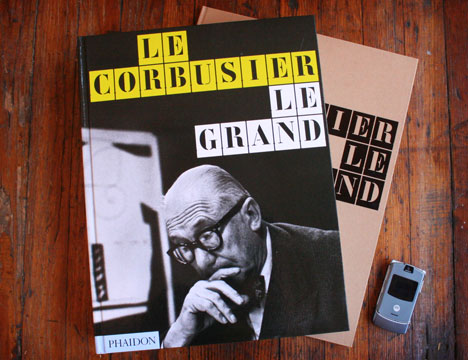 As advertised, Le Corbusier Le Grand weighs in at a whopping 20 plus pounds and measures 19.6 by 14.3 by 3.9 inches with over 600 pages. It stands (or lays) as a comprehensive archive of the work of Charles-Edouard Jeanneret-Gris, otherwise known as Le Corbusier and arguably one of the most important modernist architects of the twentieth century. While I briefly wondered if the enormous dimensions were intended to be reflective of the architect's Modulor system of proportions (they were neither 3:4 nor the 4:5 of the Modulor, but closer to 5:6), the scale of the book more than reflects the enormity of Le Corbusier's ambitions and output.

Brimming with photographs of projects and crisp pictures of tattered notebook pages, Le Grand seems to compile every document from Le Corbu's life, leaving the reader with the impression that they've uncovered some lost shoebox of memories, and maybe a level of detail that they don't quite deserve to visit. I was unaware, for example, that Le Corbusier may have had an affair with Josephine Baker, or that his right thigh was savaged by a propeller blade in the Mediterranean. Those seemingly tiny details humanized an imposing historical figure. Stumbling into a casual photograph of a middle aged and pantless Le Corbu with visible leg scarring and hairless buttocks ... well, somehow it seemed that both he and I may have been victims of an unwanted intrusion into his private life. While many books have revealed the ideological themes of his manifestos or his constant ongoing struggle with politics and the press, the comprehensive scale of this tome illuminates the sorts of dark corners of life where the stark realities of human existence, foibles and all, tend to hide. Le Corbusier Le Grand works as a giant book full of little revelations. 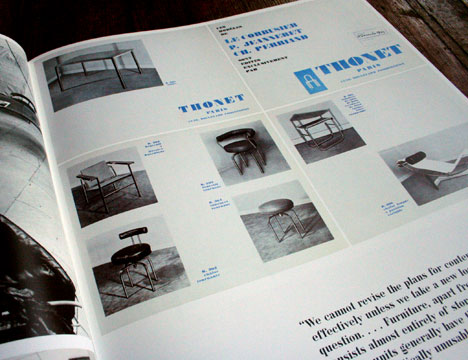 Punctuated into ten chapters arranged thematically and chronologically, the reader is given a lengthy introduction, followed by a one page essay at the start of each chapter. While the essays are enlightening, the pictures and the letters are the real focus. Literal boxes of text accompany each spread and provide notable details, but with only 20 odd pages of prose out of 625 pages of photographs, letters and diagrams, at first pass it seemed that Le Grand doesn't really provide a narrative history of Charles Jeanneret's life. The true treasure trove of the enormous work, however, hides in an accompanying book (you heard that right, it's a 625 page book that comes with another book!). That far slimmer and apparently dull companion contains translations of all of the French letters and documents in the larger work. Those writings, however, provide far more emotional and private insights into the life of Le Corbusier than candid pictures ever could. They also provide a timeline, detailing the everyday struggles and desires of a man whose image and public persona now looms large enough to overshadow the simple realities of history.

Le Grand is not a biography of Le Corbusier, nor does it intend to be. Instead, it serves as a pictographic and textual accompaniment of a life. It's easy to forget just how radical his work was, but just a few photographs make it clear. One picture frames a housing development that he designed against silhouettes of men in three piece suits, complete with bowler hats and canes. While the housing development would be perfectly at home in southern California today, the people are clearly from a different era. The early chapters of the book stand out because of their apparent anachronism, but the sparse and clear line drawings of Le Corbu's early projects thrill by their own merit. The details of his product work are included as well. One can see quite clearly, for example, the involvement of Charlotte Perriand in the design of Le Corbusier's iconic LC2 armchair and accompanying LC4 chaise lounge. Even though her role has been relegated to a historical footnote, the documents and schematics betray just how involved she may have been, alongside rather comprehensive process work and drawings. 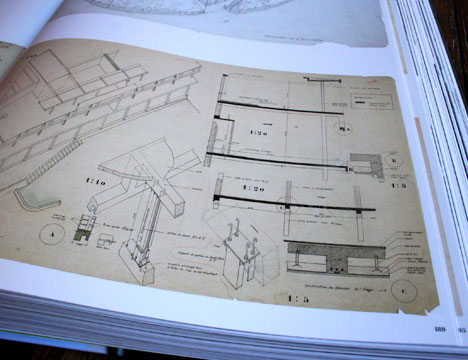 Upon passing middle age, Jeanneret become the symbol we know (receding slicked-back white hair, round black glasses, bow tie, hawkish nose, etc.) as his output seemed to become more ideological than physical. Certain later works such as the Phillips Pavilion, a collection of struts and fabric under tension, seem to presage Calatrava and thrill in their simplicity, but many other efforts disappoint. The Modulor system of proportion alluded to above led to low ceilings and a fudged understanding of human proportion. His artwork and sculpture were arguably sub-par, but his ideas were those of a visionary. His concepts of cities of skyscrapers above parks remain as contentious today as they were then. The progress of time has proven that Le Corbusier's ideas of towers with garden vistas never materialized as idyllic paradises, often languishing as slums instead; but those projects do not convey the sum of his philosophy. This reader was surprised upon reviewing Le Corbusier's later letters and proposals with his overpowering obsession with the tension inherent between the urban environment and nature. Upon reading those heartfelt letters, his misguided obsession with garden cities actually seems particularly prescient now that we are beginning to realize that our architecture may not be sustainable with our current lifestyle.

Reading through his personal effects, as made possible by Le Grand presents Le Corbu as an unabashed Utopian with unbounded ambition. Architecture and city planning in particular seem to lend themselves to this sort of persona, with varying results (see The Endless City for details on the conflict between authoritative planning and unchecked growth). While Le Corbusier's conclusions may be in doubt, his vision never was, and someday soon, we may see the realization of his Utopian hopes, albeit in a different form. 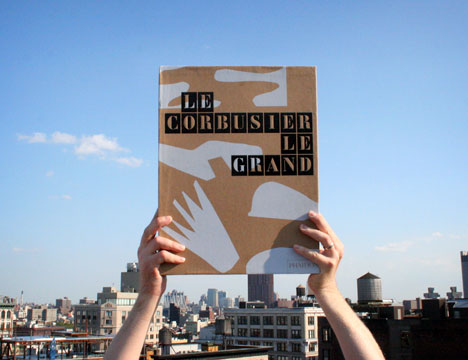