Ventomobile: Sailing without sails. On the land. 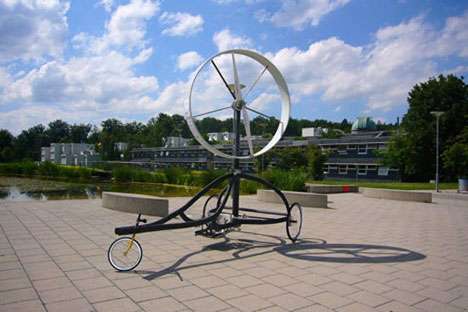 Via Inhabitat, a new take on the old idea of wind-powered transport. The AEOLUS race, to be held in the Netherlands later this month, pits competing single-person land yachts against each other, with the requirement that they sail directly into the wind. The vehicles are therefore quite different from the sail-powered craft of old, using wind turbines to harvest energy and translate it into torque on the ground.

A group of students at Stuttgart University called Team Inventus have been documenting their 9-month process of building such a craft (pictured above), and it's quite a thing of beauty. Featuring a 2m wind turbine and carbon-fiber construction, the craft weighs in at less than 100kg, and the videos are fascinating, if a bit over-produced. Here they introduce the fully assembled, though not yet functional, Ventomobile -- keep an eye on the blog for further developments:

Ventomobile: Sailing without sails. On the land.