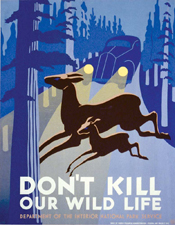 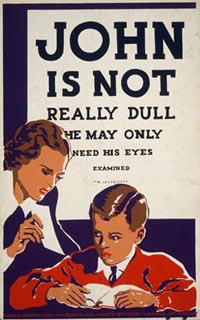 Imagine if you took today's best graphic designers and set them to work producing not advertisements or marketing brochures, but propaganda to promote American values. Starting in the mid-1930s, during the Great Depression, that's precisely what happened when the federal government tapped the nation's unemployed commercial artists for the Works Progress Administration poster division. Working out of nearly 20 regional workshops, they designed posters to promote safety, good health, community involvement, and other social values.

Utne Reader has a slideshow of some of these posters and many rare ones reproduced in a new book by Ennis Carter- Posters for the People (Quirk Books, 2008). Here's a snippet on Carter herself, Carter, 42, was working as a young organizer for the New Jersey Public Interest Research Group in the late 1980s when she found herself, out of necessity, making her own posters for events and rallies. It was the age of Kinko's, and Carter mastered the art of photocopy-style guerrilla poster-making. Along the way, she became captivated by the power of graphic design to communicate social messages and gradually shifted the focus of her work in that direction. In 1996 she founded Design for Social Impact, a low-cost graphic design agency for public interest organizations.

text and photocredit: UtneReader image courtesy of the Library of Congress, Prints and Photographs Division

After 30 odd years in the global design industry opening doors to new
and frontier markets through exploratory user research, concept design, and innovation strategies, Niti returned to academia as a student to pursue a PhD in Product Development at Aalto University's Design Factory. Her dissertation looks at the contribution of design methods to foster agency and capacity for innovation as a resilience strategy to shocks at the micro-level of the individual. Her research approach has expanded the multidisciplinary lens of viability, feasibility, and desirability to a transdisciplinary one where participants generate the actionable knowledge for their own innovation pathways.