How much do you have to trust that pilot?

On overhead power lines, you've seen those things that look like kickballs, which are placed there to warn low-flying planes and helicopters to stay well clear of the hard-to-see wires. They're called aerial marker balls. Made of UV-stabilized ABS plastic that comes in orange, yellow or white, the balls range in diameter from 9" up to 36". 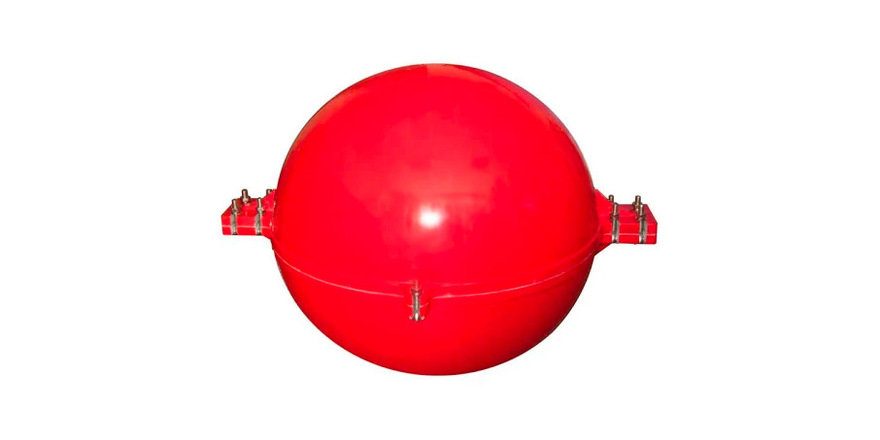 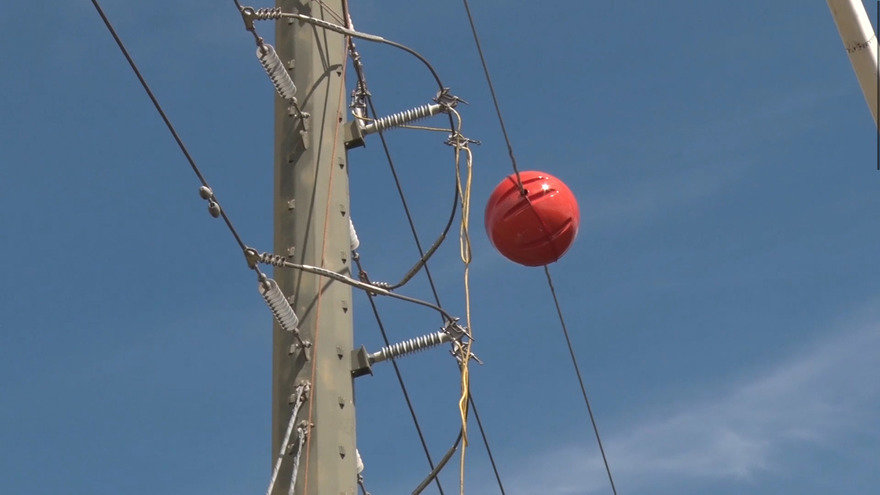 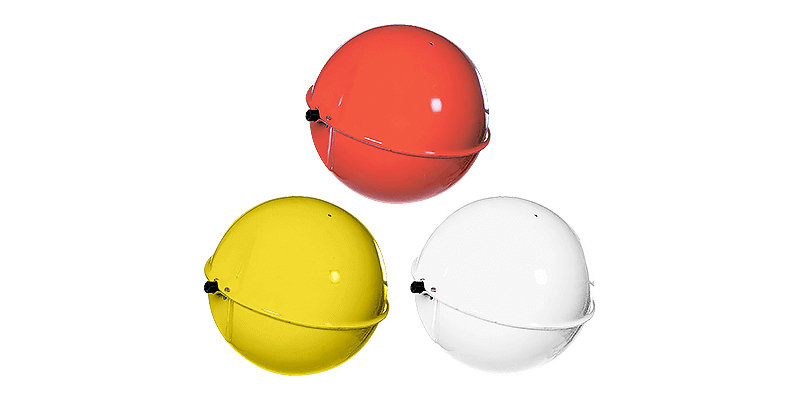 When the lines are being put up from scratch, the balls can be installed on them using a bucket truck as the wires are erected, and they travel with the lines as the lines are unspooled. 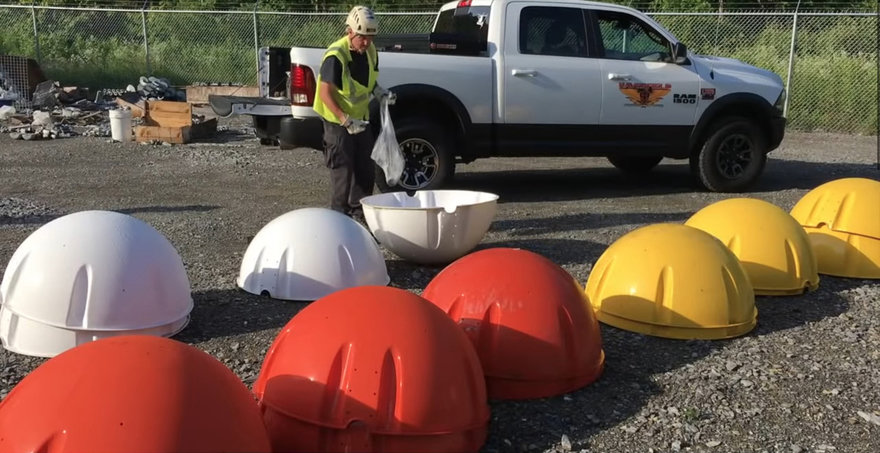 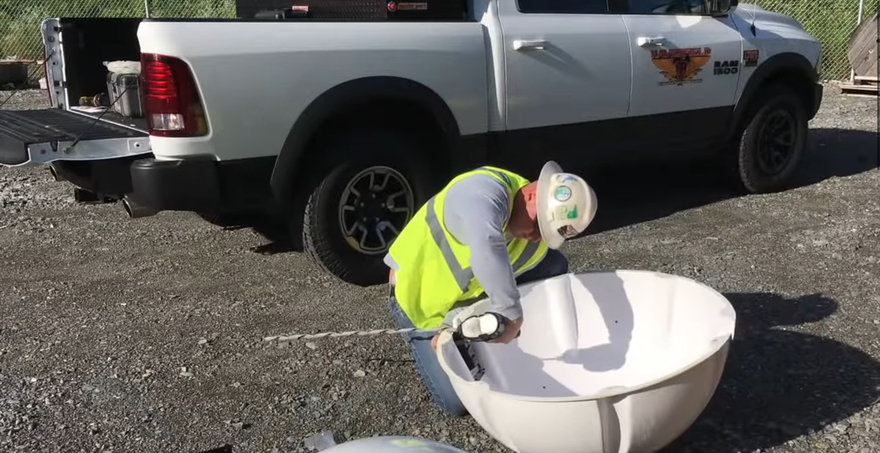 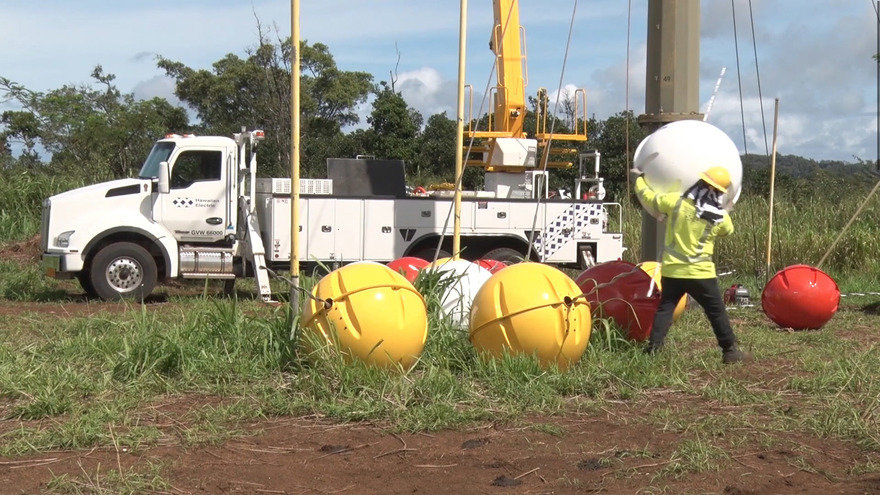 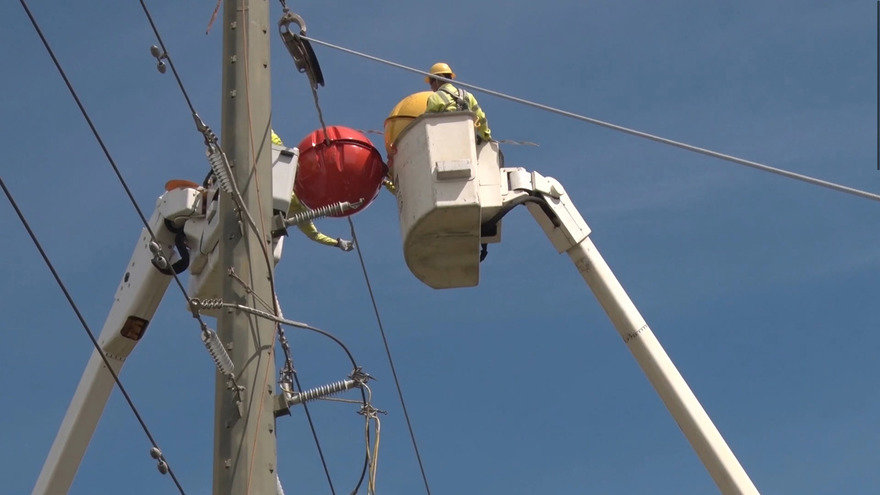 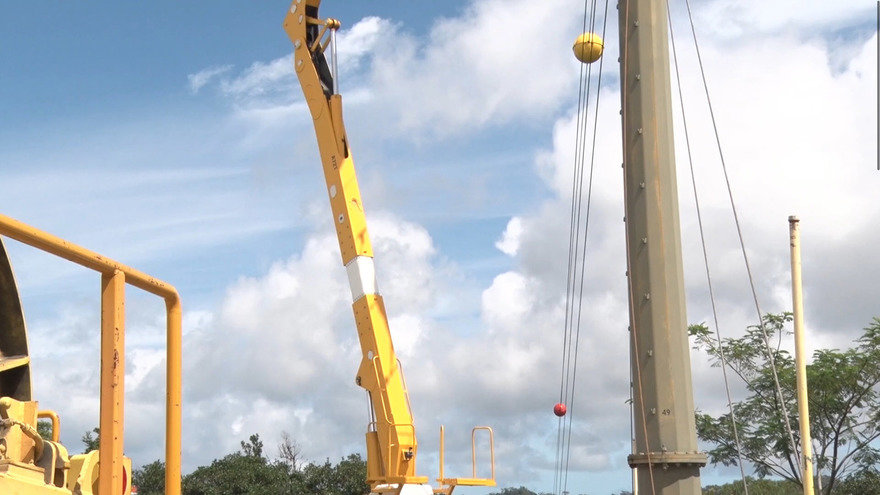 But in the case of existing wires, aerial marker balls are installed, ironically, by helicopter. A guy sits on the side of a platform over the skids and hangs onto the ball. Arriving at the right spot on the power line—which is pre-marked on a separate, earlier trip with spraypaint—he then has to open the ball like Pac-Man, muscle it over the wire and bolt it shut. He then wraps some attaching wires on the sides around the power line itself. 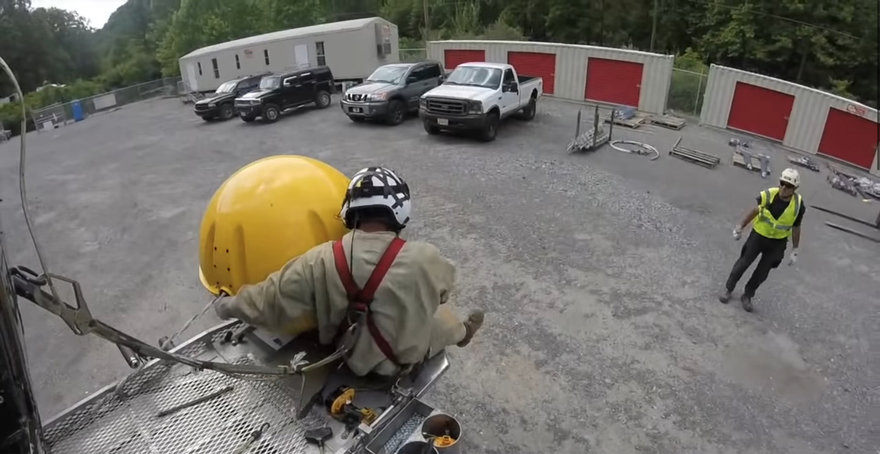 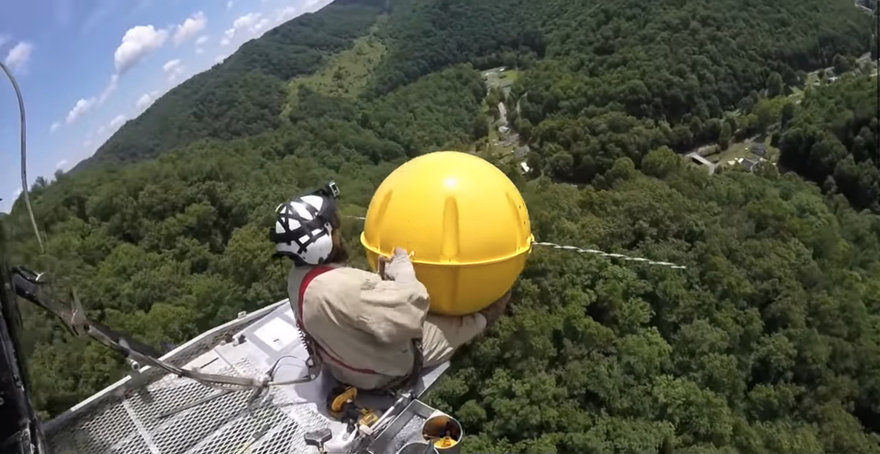 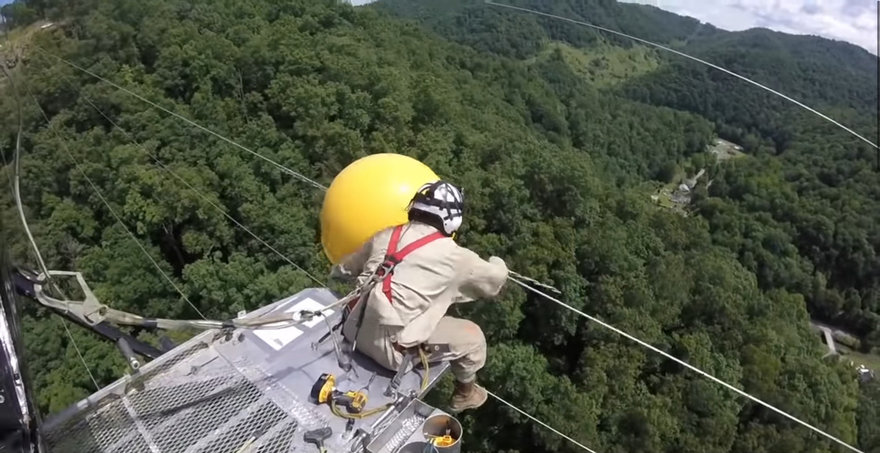 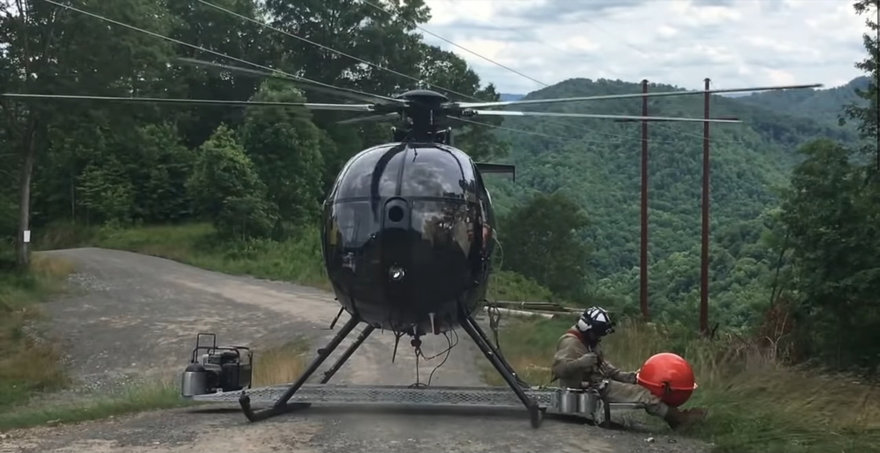 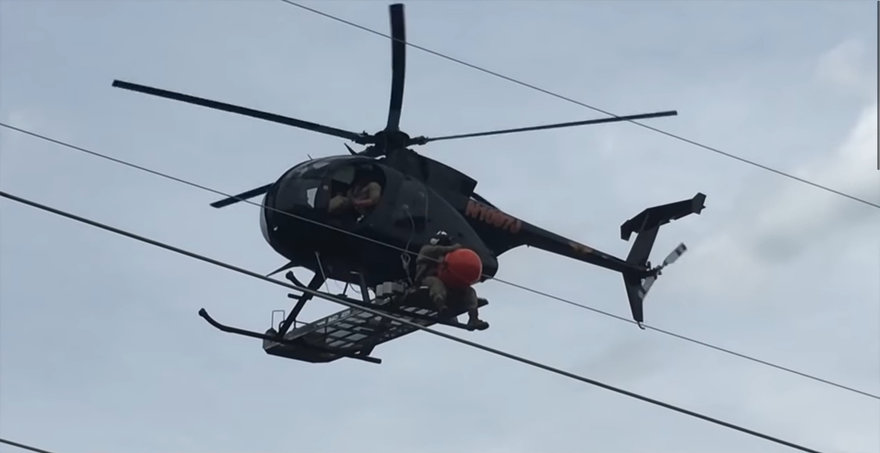 Sometimes the ball is so large and heavy that it has to go up in two trips. Because it's not like it's mounted in a bomb rack; the installer has to hang onto it. Despite its name, this SpanLite model made by P&R Tech can be up to 51 pounds and due to installation requirements, it's carried up and hooked up one half at a time, with the helicopter touching down in between. 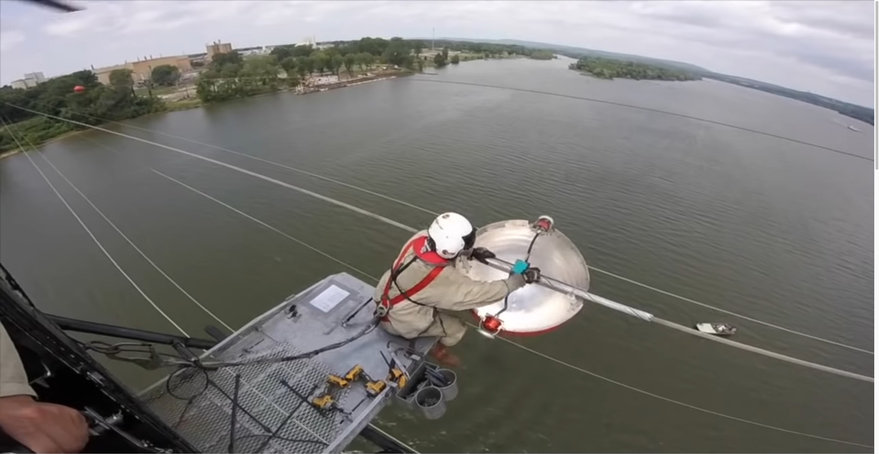 In the explanatory video below, which is pretty fascinating, you can see installations of a few different types of aerial marker ball, including the SpanLite. That last one is a clever bit of kit, as it siphons waste energy from the line itself to power two LEDs.

Aerial marker balls do not seem designed with the UX of the installer in mind, and I'm impressed with how fast some of them can get the clunky things into place. In the video below, the installer is taken up from the ground, installs the ball, and touches back down to get the next one in less than five minutes.