Stackable storage totes are a dime a dozen, so it's great to see a standout version that has had a fair amount of design thought put into it. These Expedition 134 Heavy Duty Plastic Storage Boxes were designed in Australia specifically for off-road use, i.e. for holding gear on a truck or jeep as you scrabble across the outback. 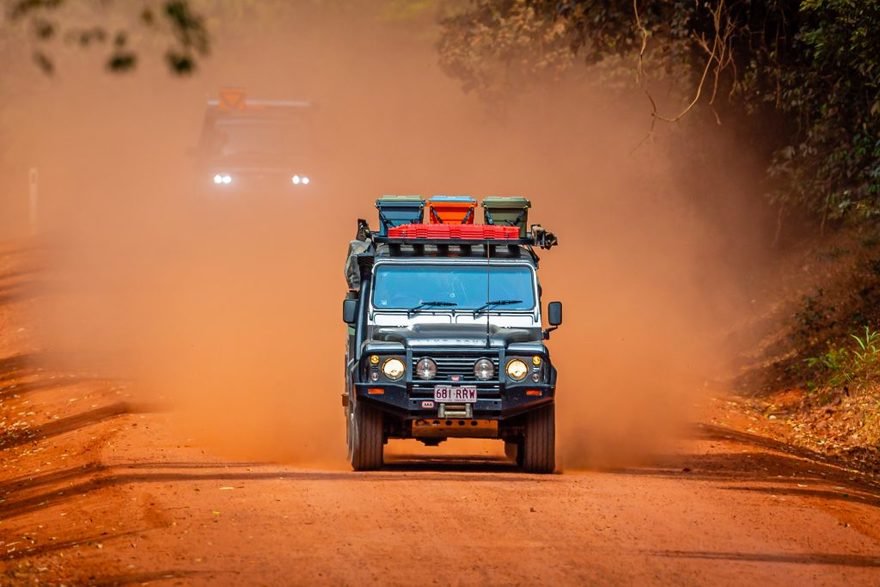 As such, they were not designed in a vacuum, but were created in direct reaction to the shortcomings of your average storage tote; developer Open Sky Touring listed all of the problems with using substandard totes, then went down the list solving all of them with design. 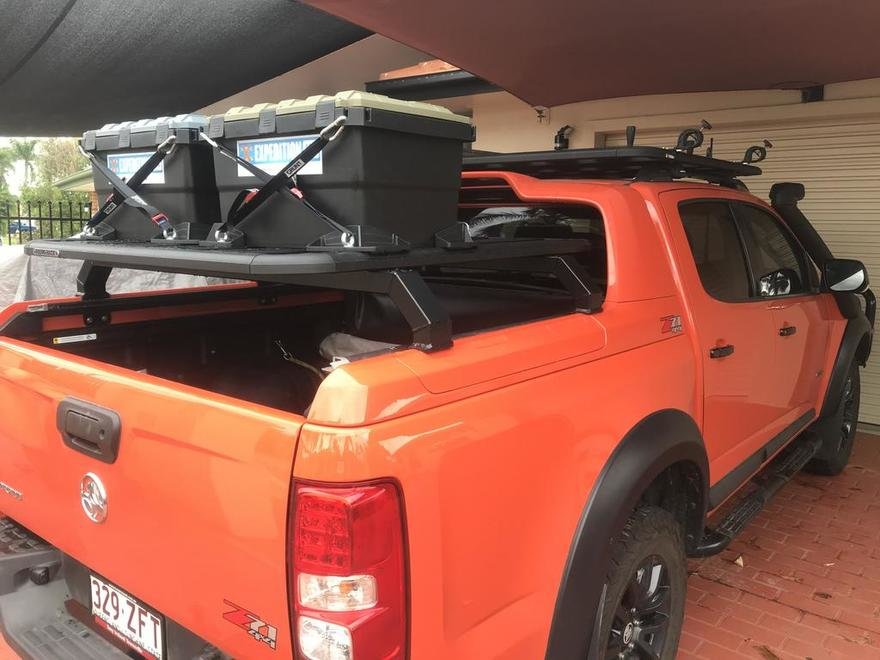 "We had tried many boxes in the past and were often frustrated by the ability of them to be belted around in the back of the truck while on a remote trip," the company writes. "There is nothing worse than being remote or away camping and gear has been damaged, or the weather and dust has made it onto your clothes. It's frustrating and painful to find a fix when away."

"Our precision injected moulded expedition boxes are made to last and last trip after trip." 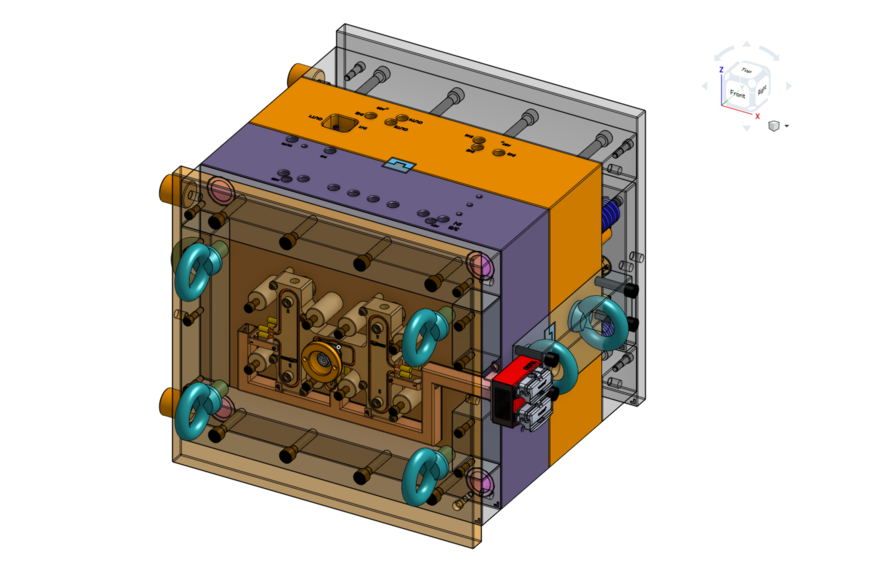 The basic requirements are obviously that the boxes be both tough and weatherproof. This is easy enough to do by beefing up wall thicknesses and adding structural elements to the injection-molded body and lid. The boxes are strong enough to stand on, for instance. 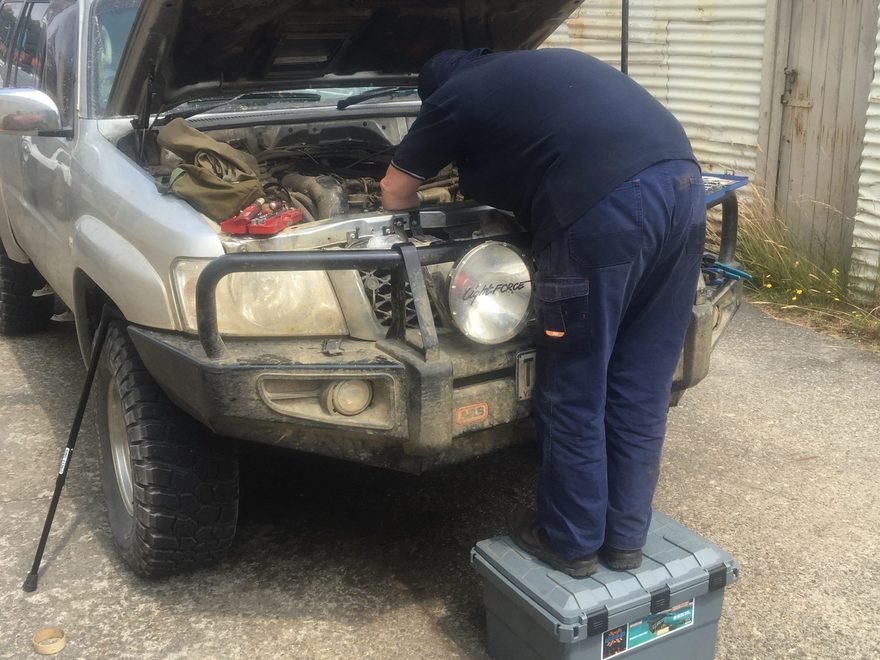 The designers also shaped the lid so that it would not pool water in a rainstorm, and molded a raised ridge around the lip of the box that mates with a channel in the lid that's fitted with a (replaceable) rubber seal, forming a waterproof, dustproof, weatherproof closure. 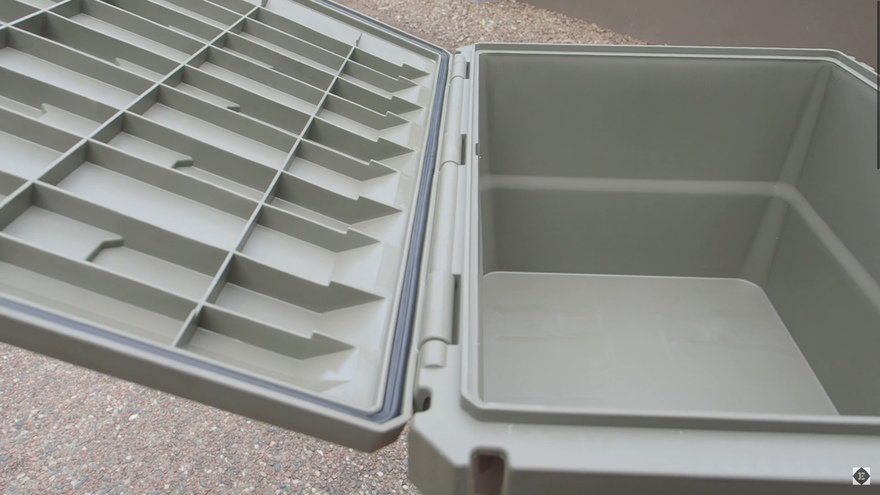 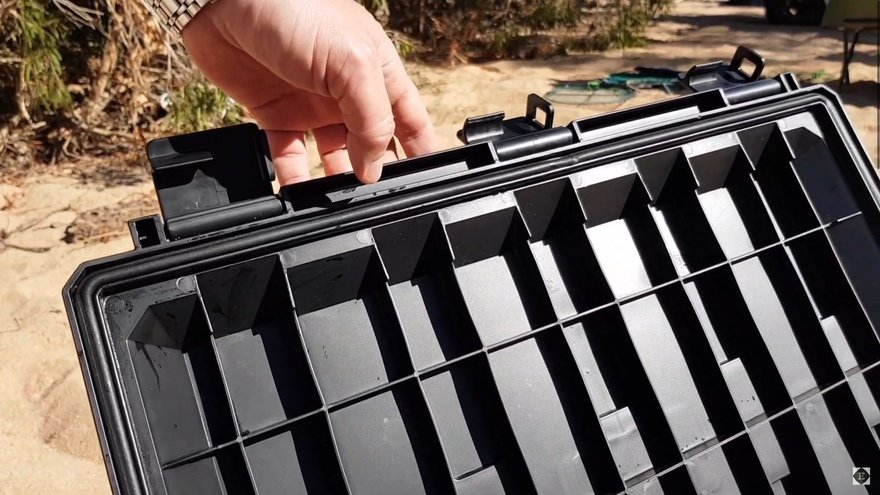 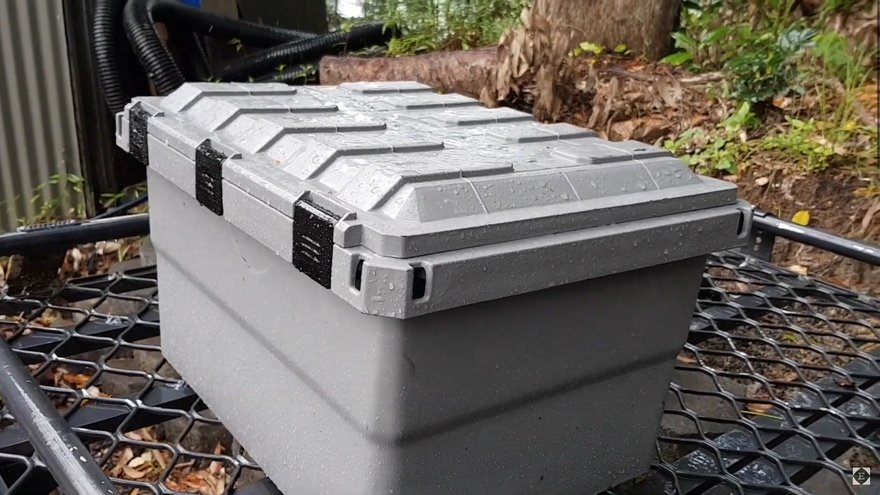 Additionally, ridges are arranged in a checkerboard pattern on the lid, allowing you to align ratchet straps within them in either direction. 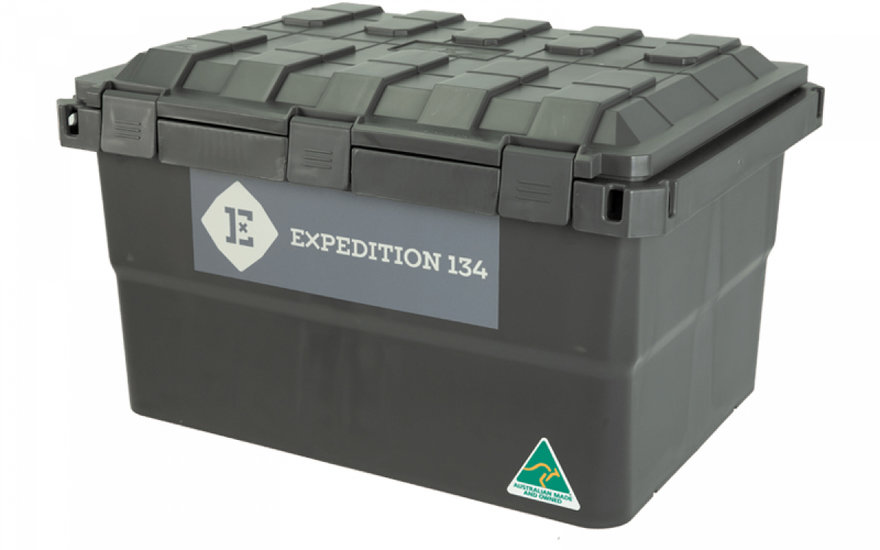 Sure, you say, that's basic stuff. But what I really like is that the designers integrated the tiedown points at the corners of the box's lip: 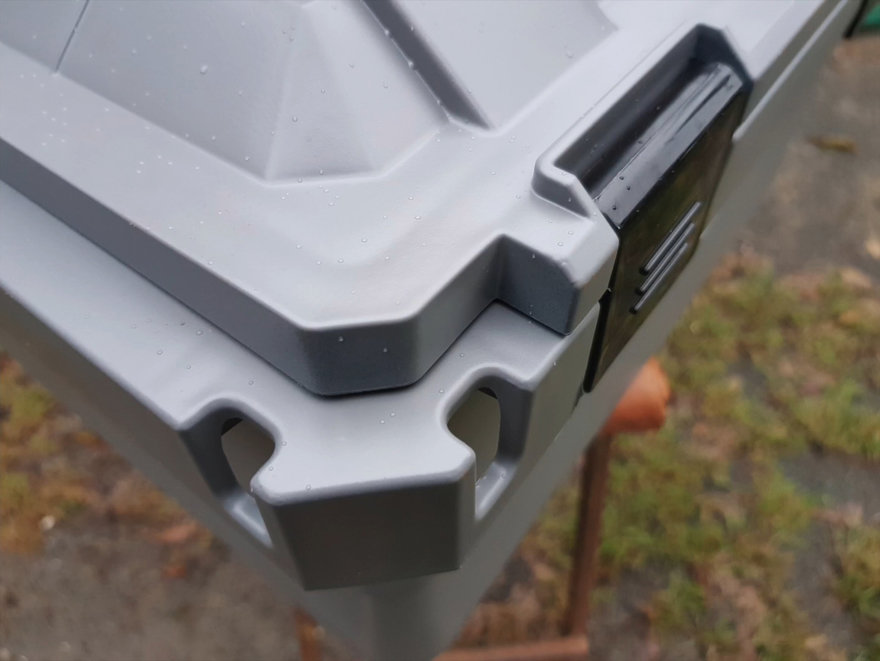 This seemingly small detail means that if you're not strapping across the top, you can still tie the box down at the corners—and actually open the lid to access the contents without having to undo the straps, which is a great UX touch. 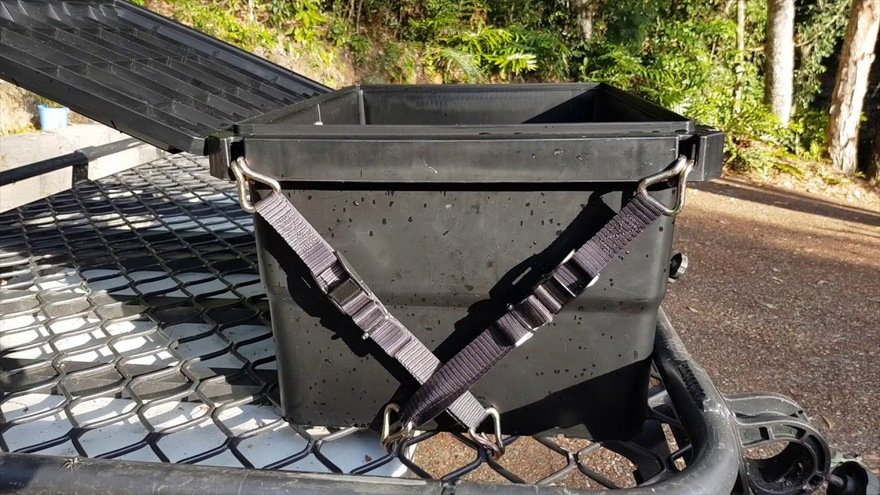 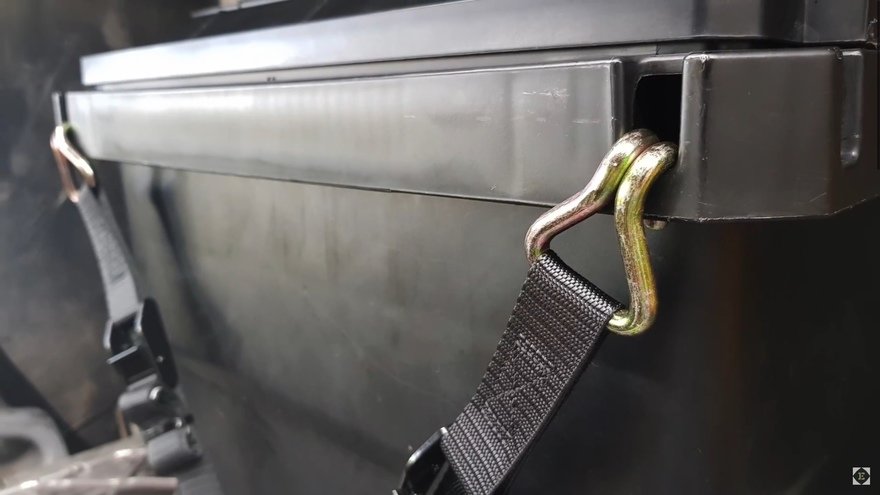 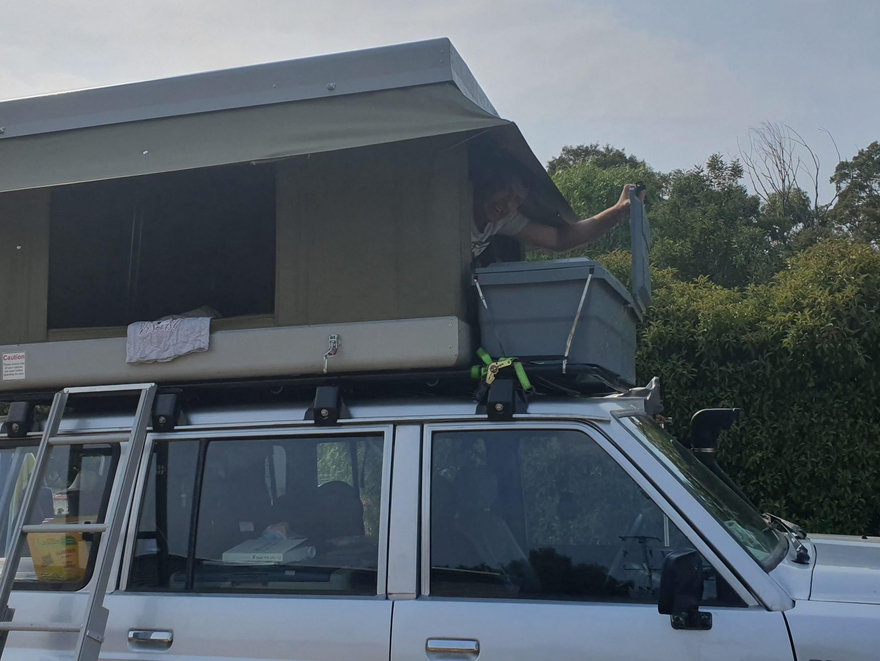 And with three beefy latches holding the lid securely shut, there's no danger the lid will be ripped open by the wind. "In fact, the seal is so good," writes company co-founder Ben Kincade, "we had to incorporate a Goretex pressure equalisation valve to prevent the lids from locking down with changes of temperature or altitude." 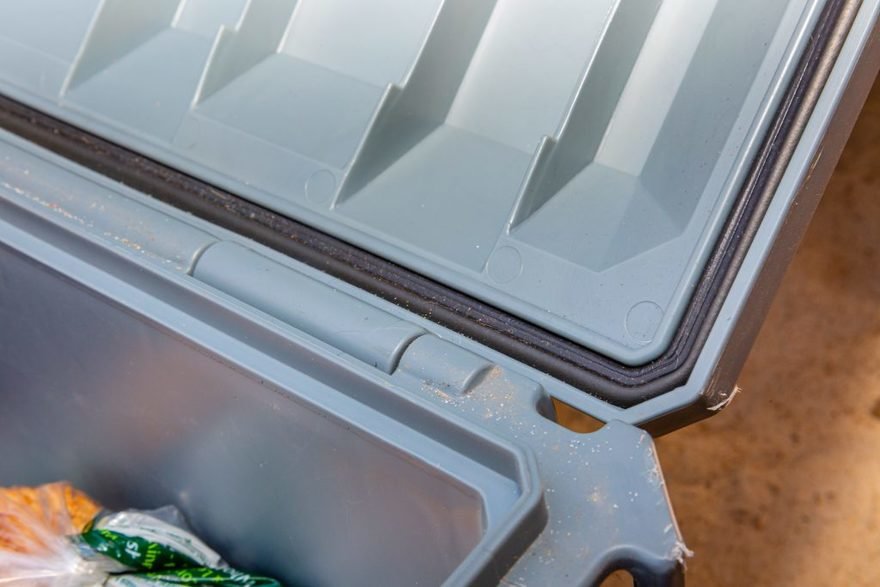 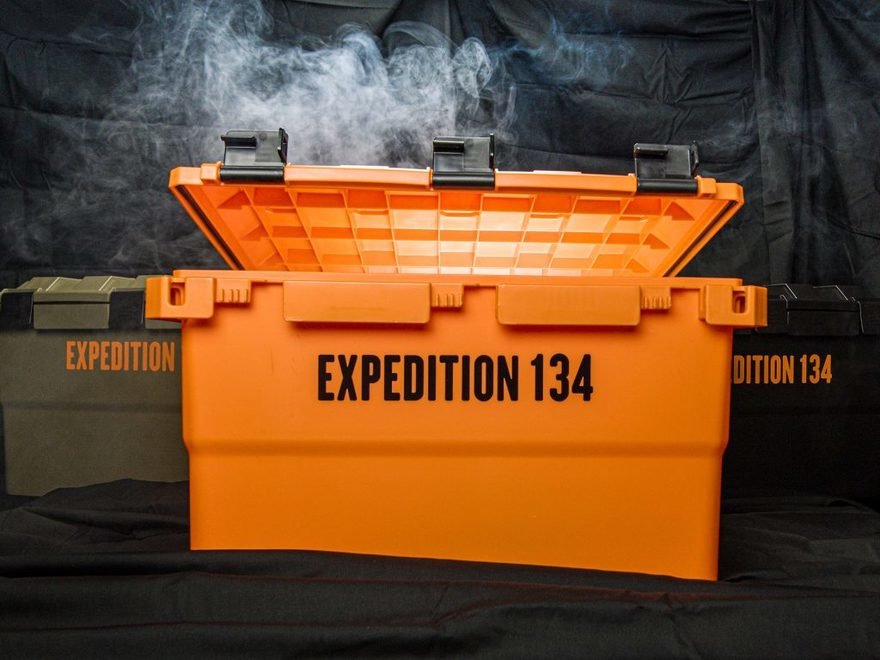 As for the lid being ripped open by thieves, the designers have integrated a padlock point, and shrewdly placed it under that same lip. That means the padlock won't protrude and catch on other items, nor will it interfere with you butting the boxes up against each other. 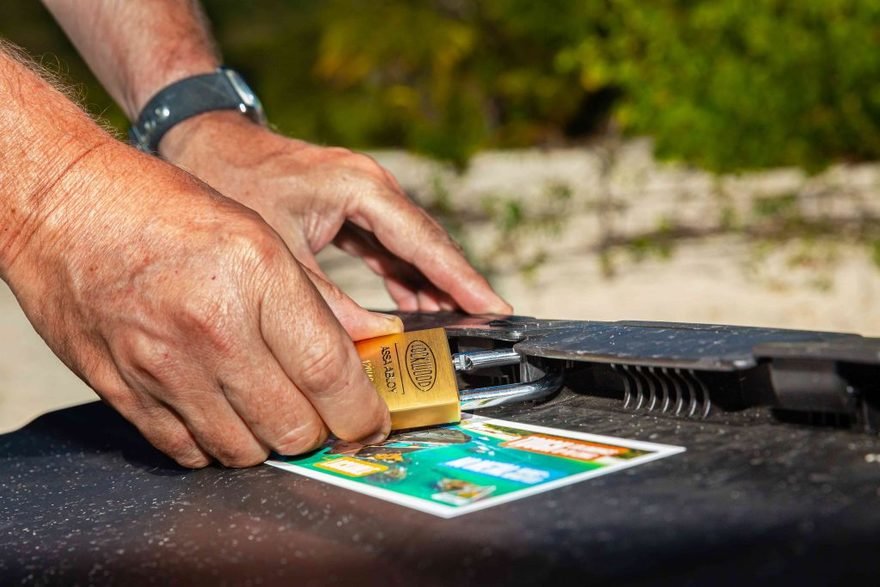 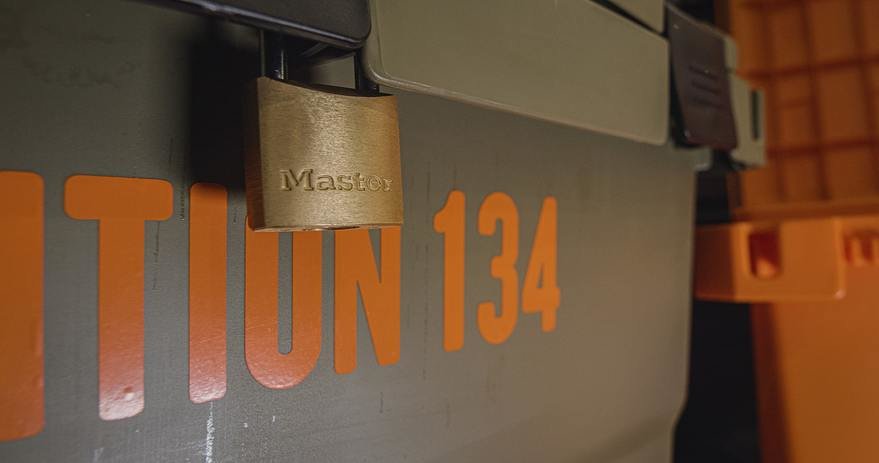 The box's lip is also reinforced and strong enough to support a fully laden box itself. "After feedback from a logistics expert," Kincade writes, "we designed the box rim so it can be used within a frame or rack system and be strong enough to comfortably hold full weight." 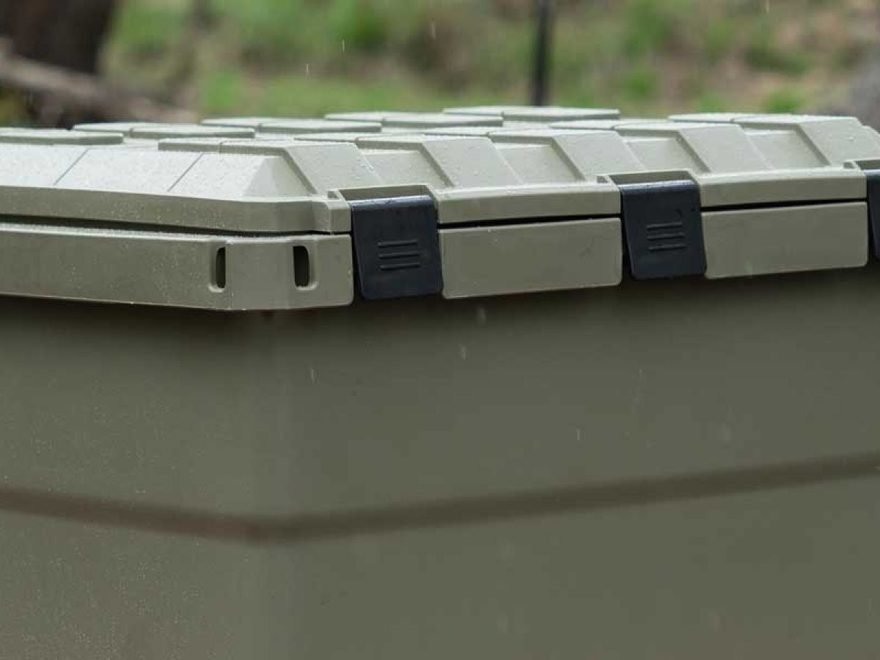 Lastly, the designers have purposefully avoided using any metal hardware, to avoid two R's: Rattling (when bouncing across the countryside) and rust (in seaside environments). The first is a mere annoyance, but avoiding the second was a hard requirement. "The box hinges and latches were particularly challenging to work out," Kincade writes, "but have been fully recessed to prevent damage or catching on anything and contain no metal, so there will never be rust. This was a 'must-have' request from contacts in the Trawler industry, Marine Parks, Fisheries Department and even the Water Police." 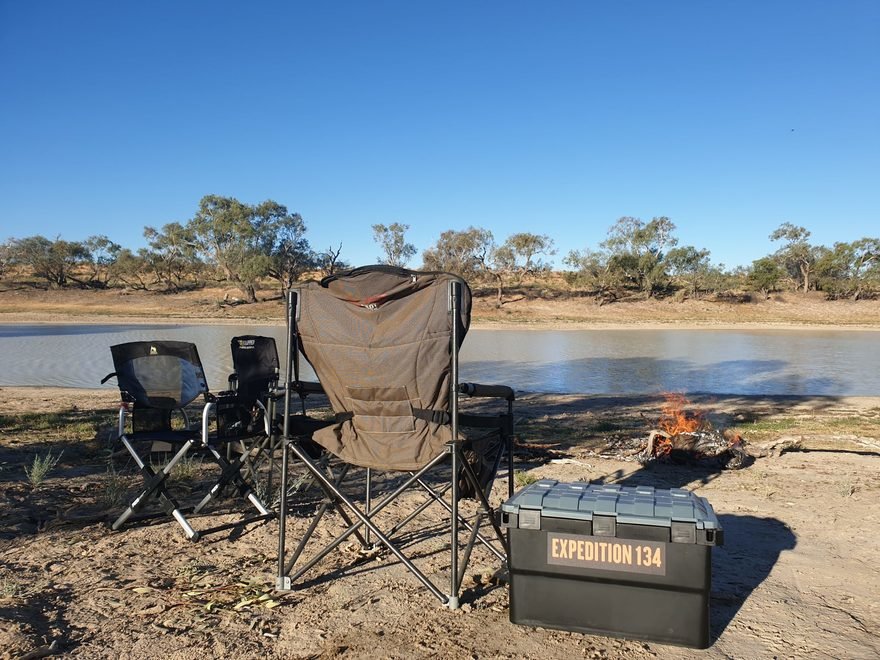 On a side note: How Mad Max are these trucks used by their customers? 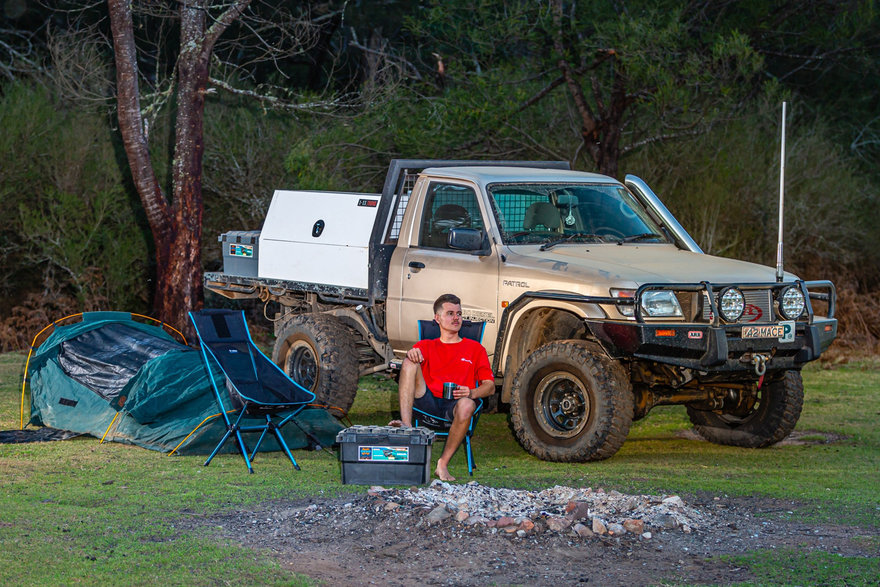 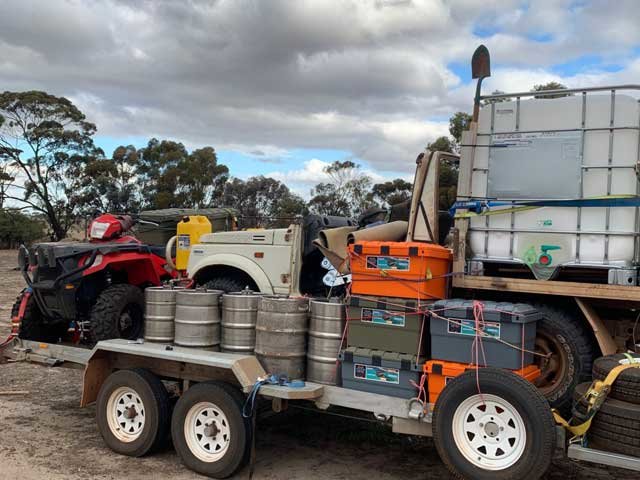 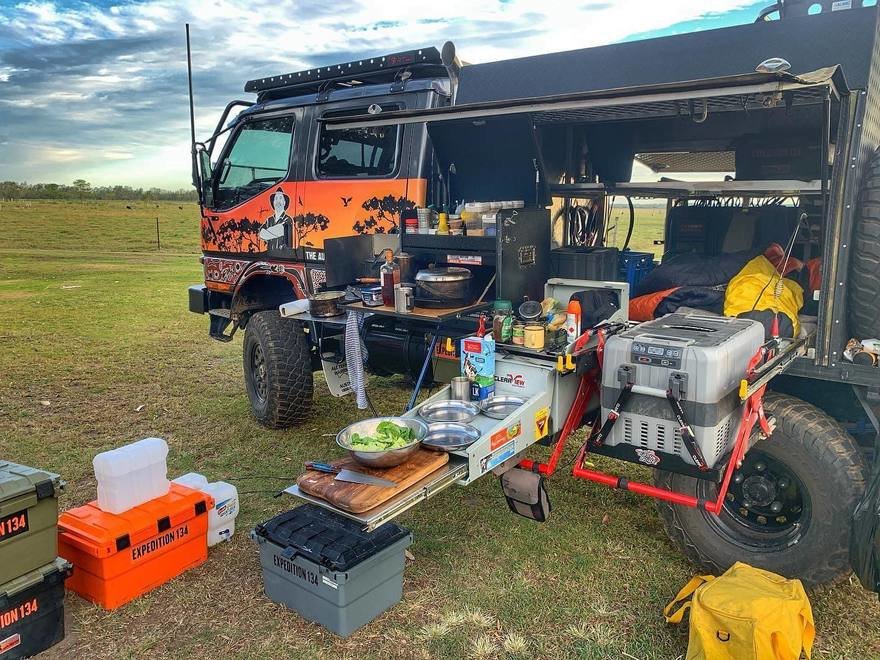 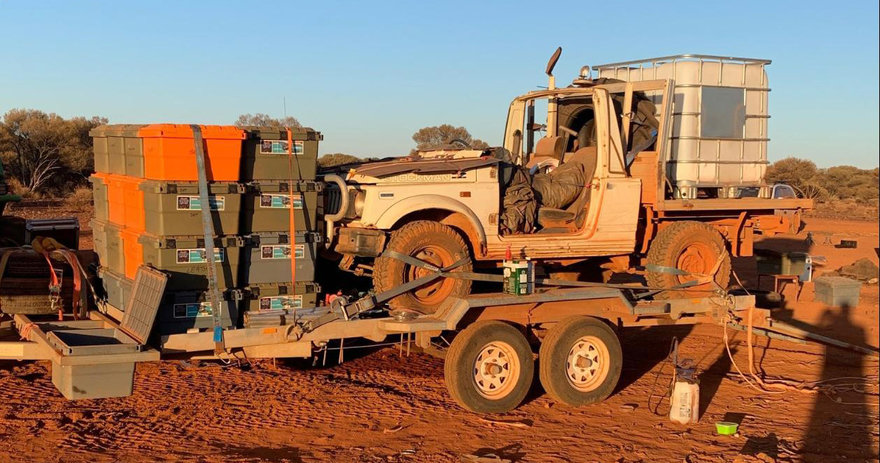 The boxes come in just one size, 55 liters (about 14.5 gallons), come in multiple colors and retail for AUD $179. That converts to about USD $130, and I found two U.S. distributors that stock the boxes: Mule Expedition Outfitters and OK 4WD. 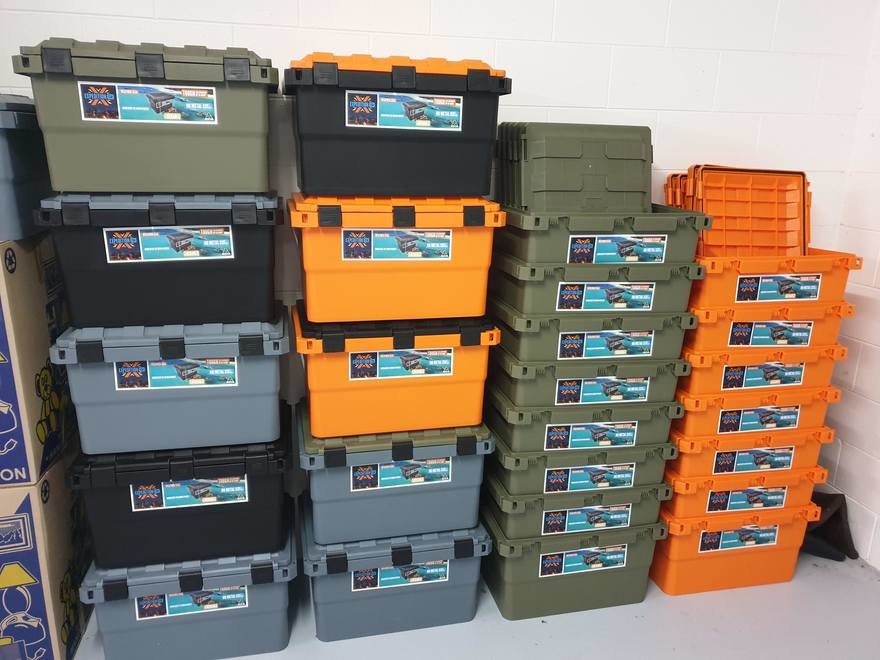 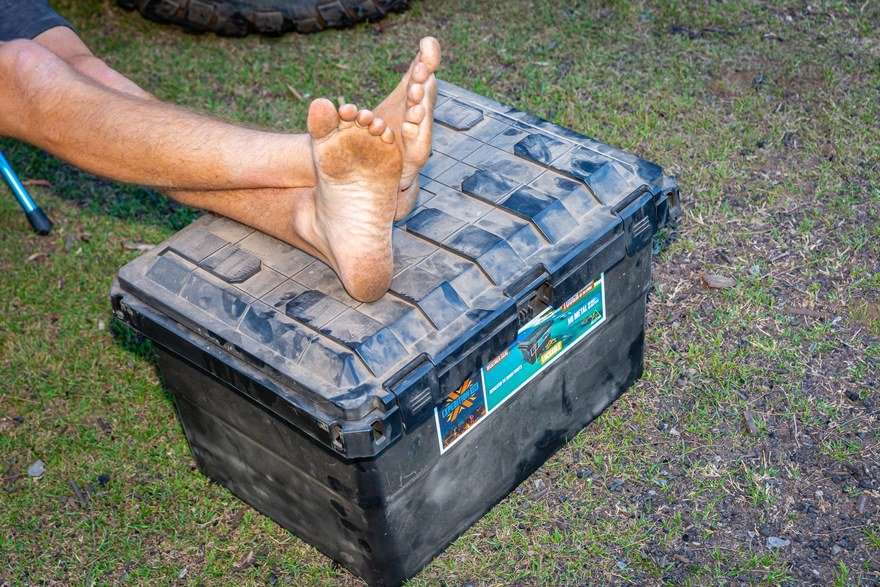 Billy Mack: Thumbs-up/thumbs-down? Is there anything you'd have done differently, from an injection molding standpoint?