When students figure out both the object and the system

My hat's off to the Product Design student team behind the Roadfix. Conceived of at the Concept Design Laboratory of the Politecnico di Milano by Luca Grosso, Silvana Migliozzi, Alessio Puleo, Zöe Schnegg and Xueyan Niu, it goes beyond merely solving a problem in the form of an object; the students also figured out how municipalities could effectively get the device to pay for itself, and the system that would sustain it.

At first blush, it seems like standard design student fare. The problem is potholes, with the students learning that "accidents due to poor road maintenance are the first cause of costs in municipalities. According to GHSA* data, in 2020, potholes are among the major causes of accidents, especially with micro mobility." (They don't spell out who the GHSA is; my guess would be the Governor's Highway Safety Association, except that's an American org and the students are all European and Chinese nationals.) 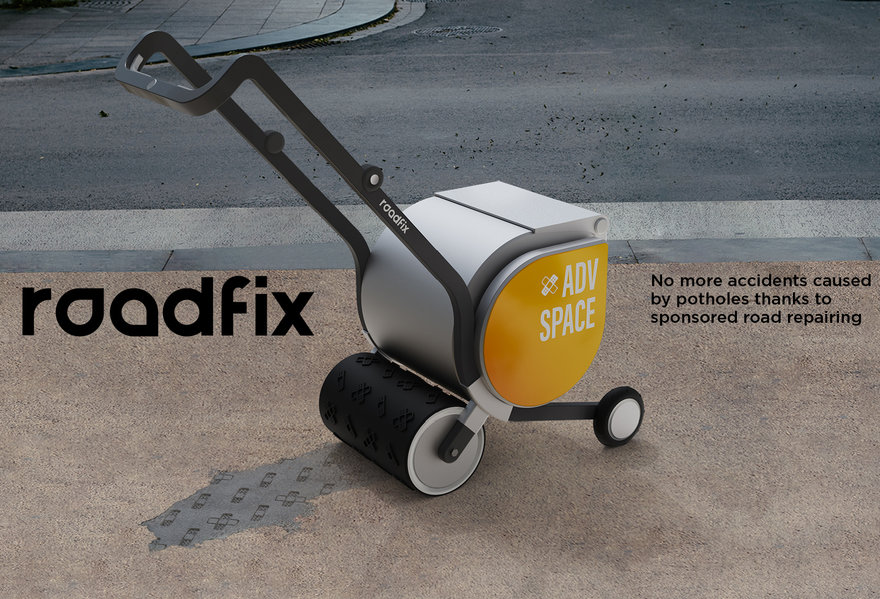 Their solution was to design a single-worker-operated portable mixer and compactor to patch the potholes. They figured out the standard ID stuff, like materials—bitumenous mortar would provide a more durable repair than the traditionally-used tar, for instance—and the ergonomics of the device, from optimizing where the weight is relative to the wheels, to the position of the operating controls, to how the operator would dispense the repair materials. 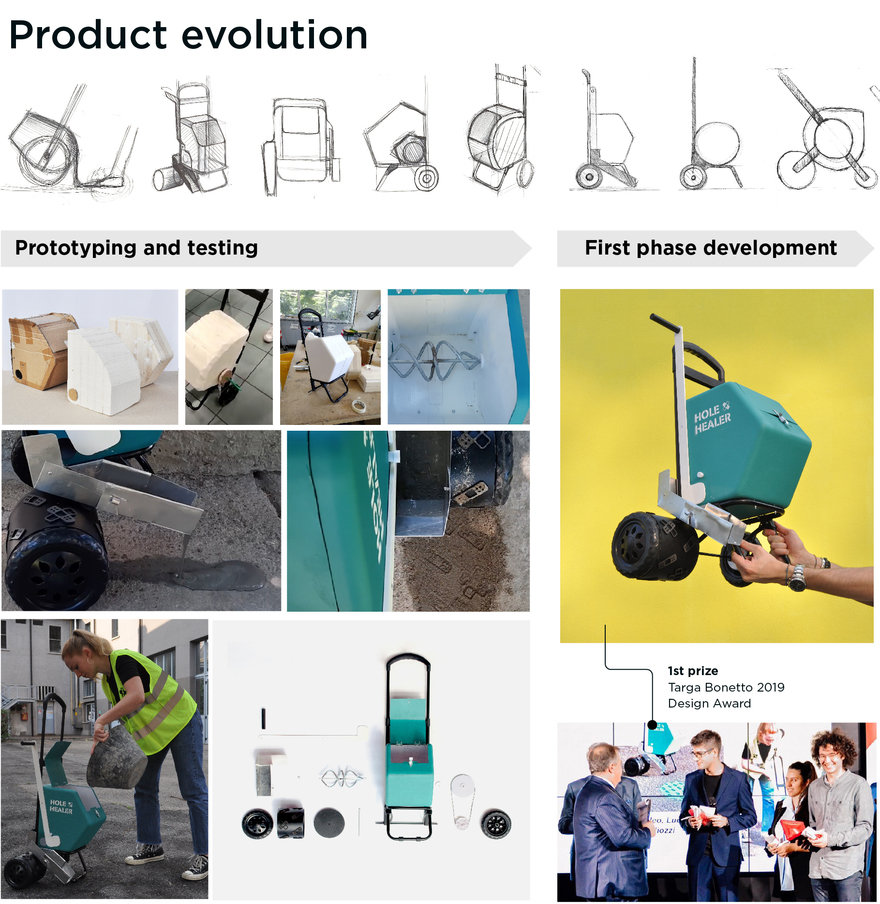 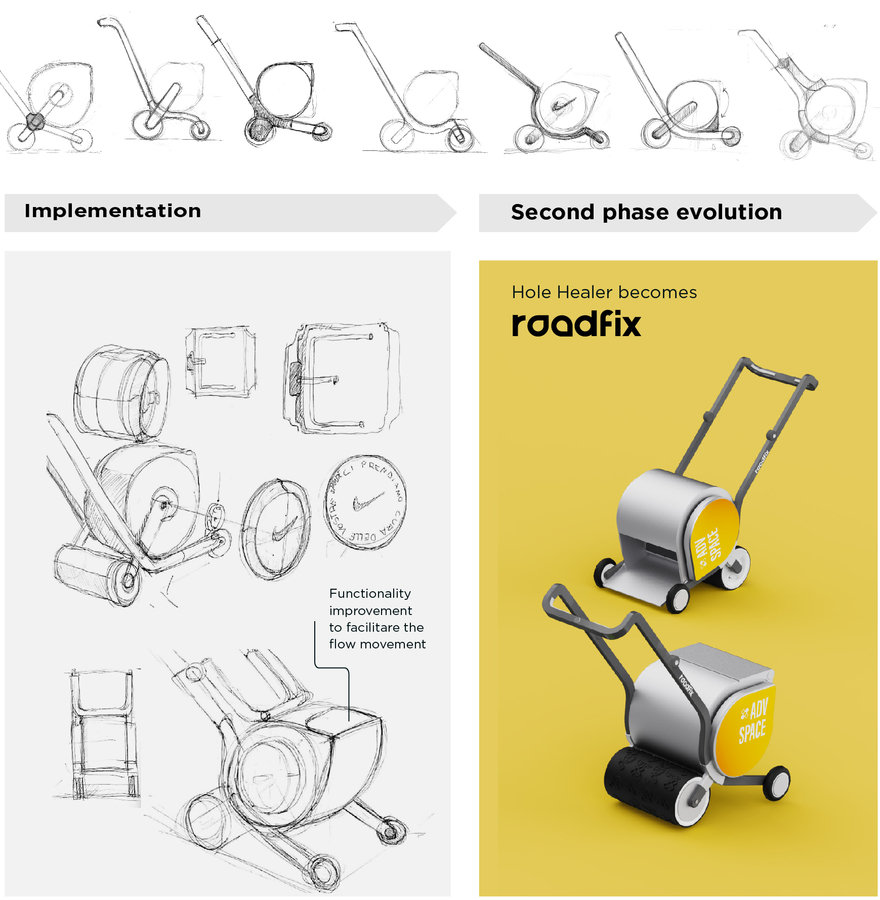 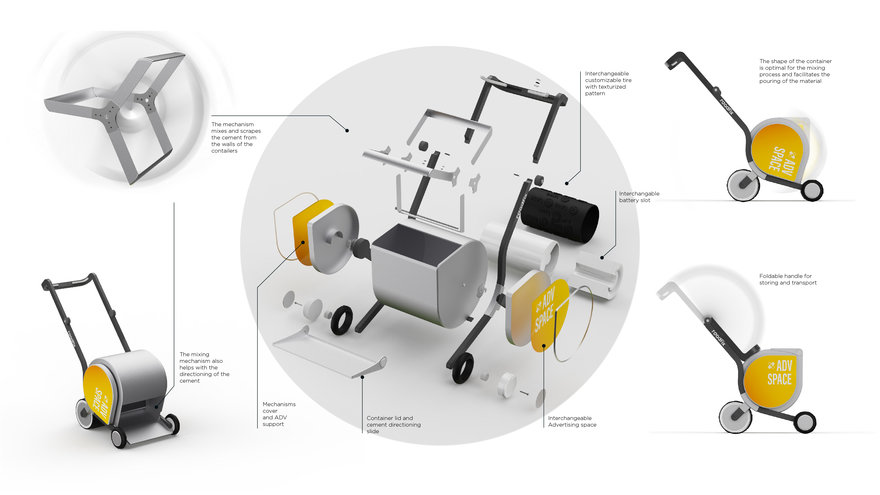 (Text too small to read, so we zoomed in below) 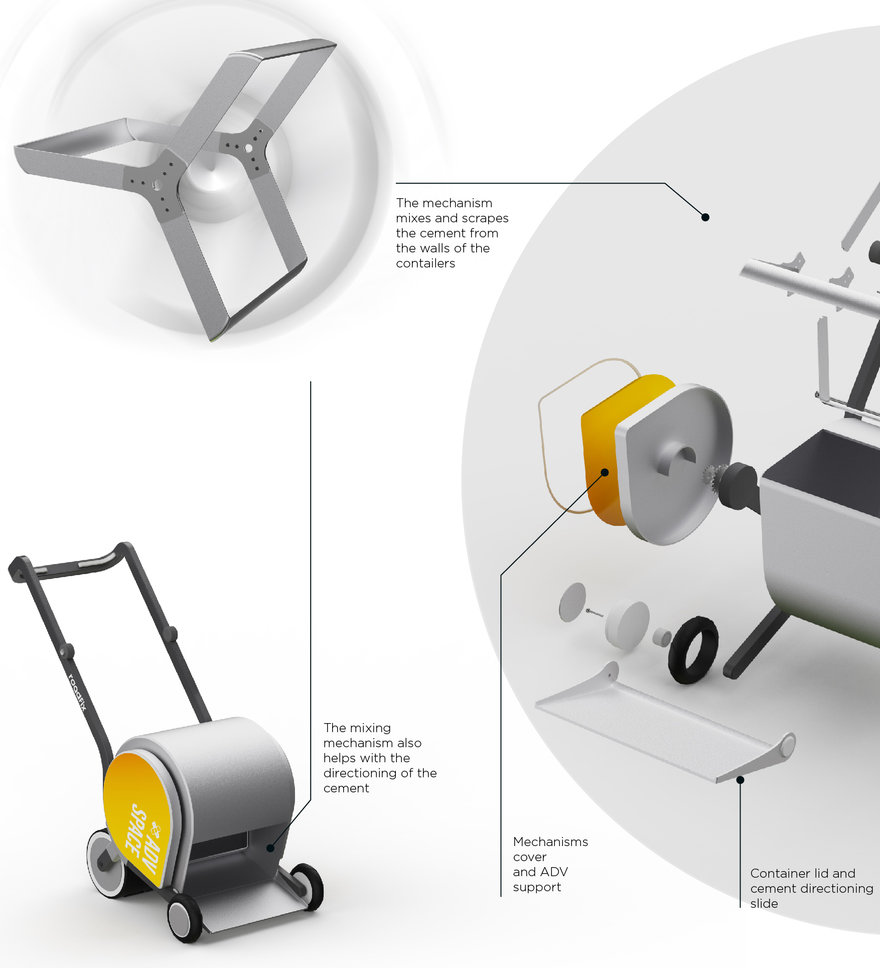 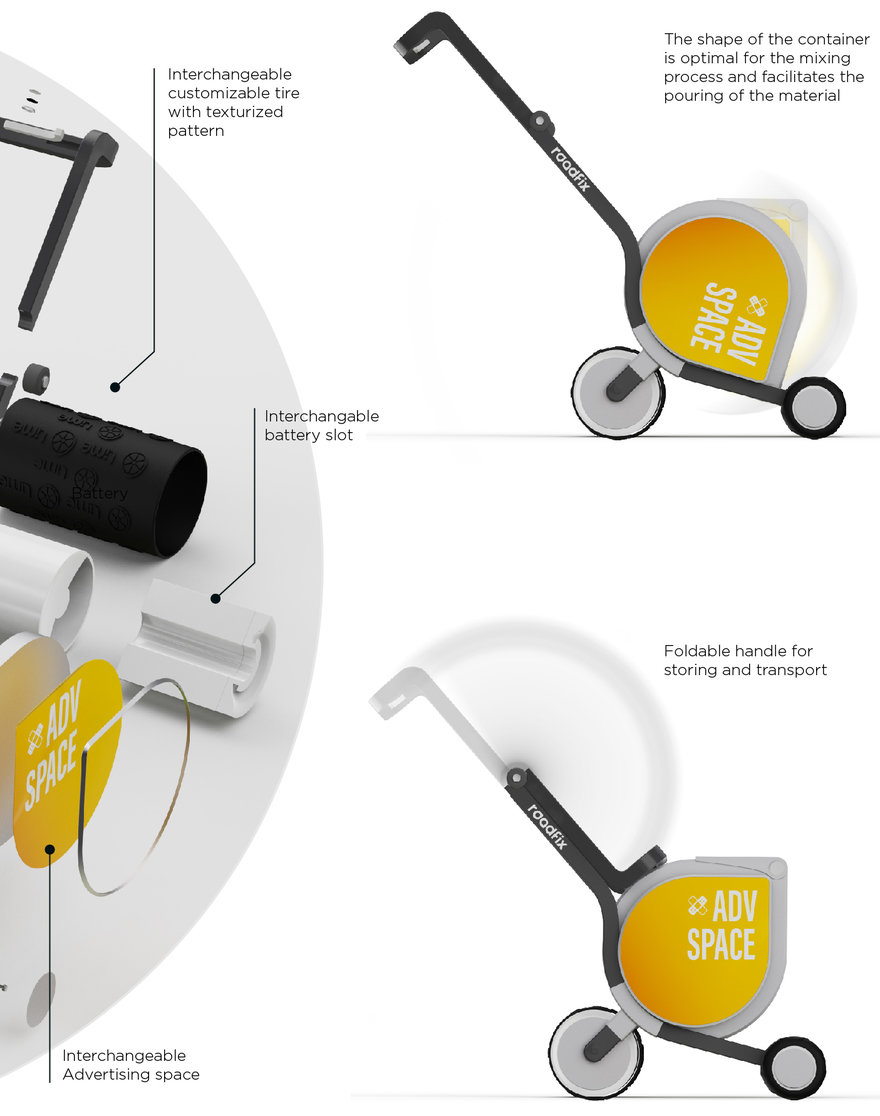 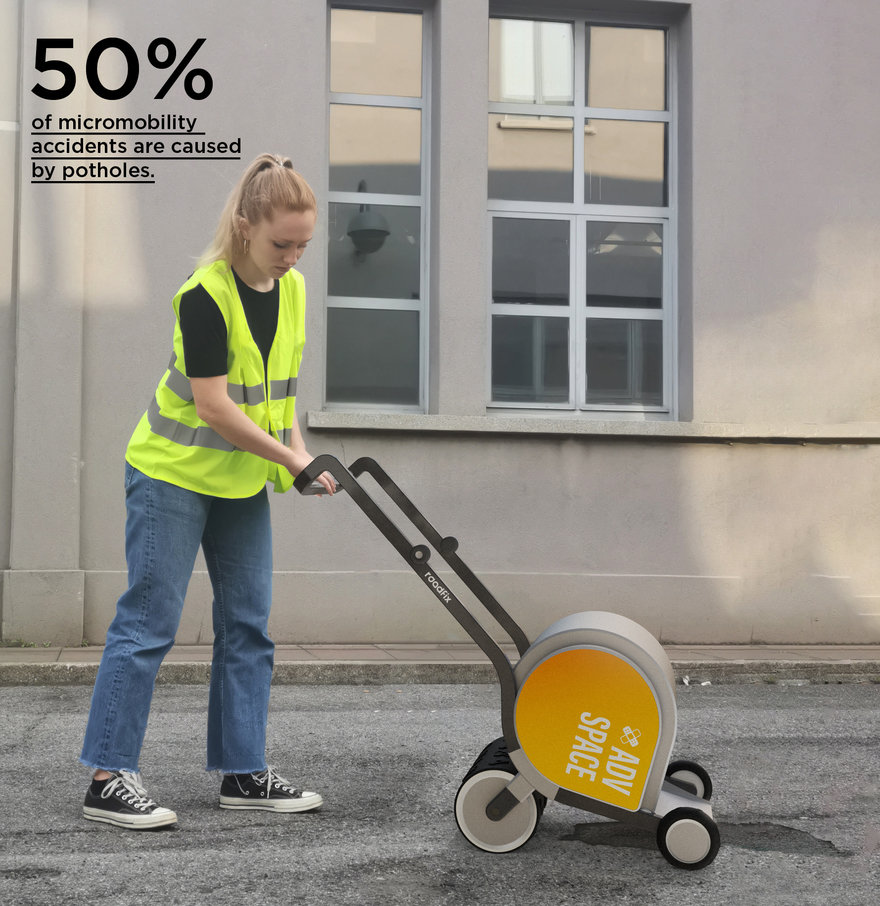 Here's where, for me at least, the students went above and beyond. Rather than having the Roadfix be something municipalities have to purchase and maintain, the students designed the sides of the object to support advertising. They also allowed for the compacting portion of the device to take a swappable custom rubber roller. That roller would have the advertiser's debossed logo on it, effectively printing it into the pavement. 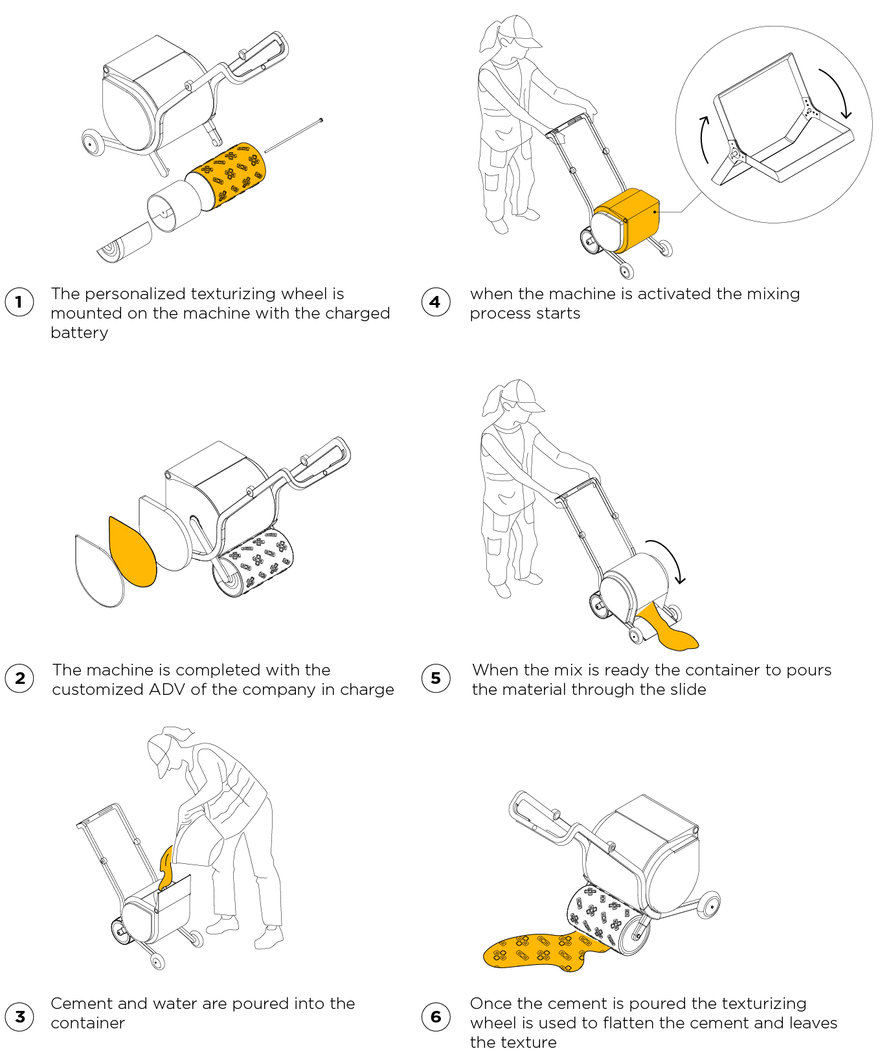 This is brilliant for a couple of reasons. As a cyclist in Manhattan and now a driver out in the sticks, I routinely ignore bus stop advertisements and highway billboards. But I always notice a road crew fixing the street I'm on, because you have to slow down to avoid them. And if there was, say, a Taco Bell logo on the side of the thing they're pushing, I'd probably spend the rest of the ride thinking about a Chalupa or whatever.

Cyclists commuting by bike get to know where the latest potholes are; if you look down to avoid one that you know is coming up, but instead you see a stamped logo, you're gonna notice that too (assuming that the logo's large enough, and you're not whizzing past). 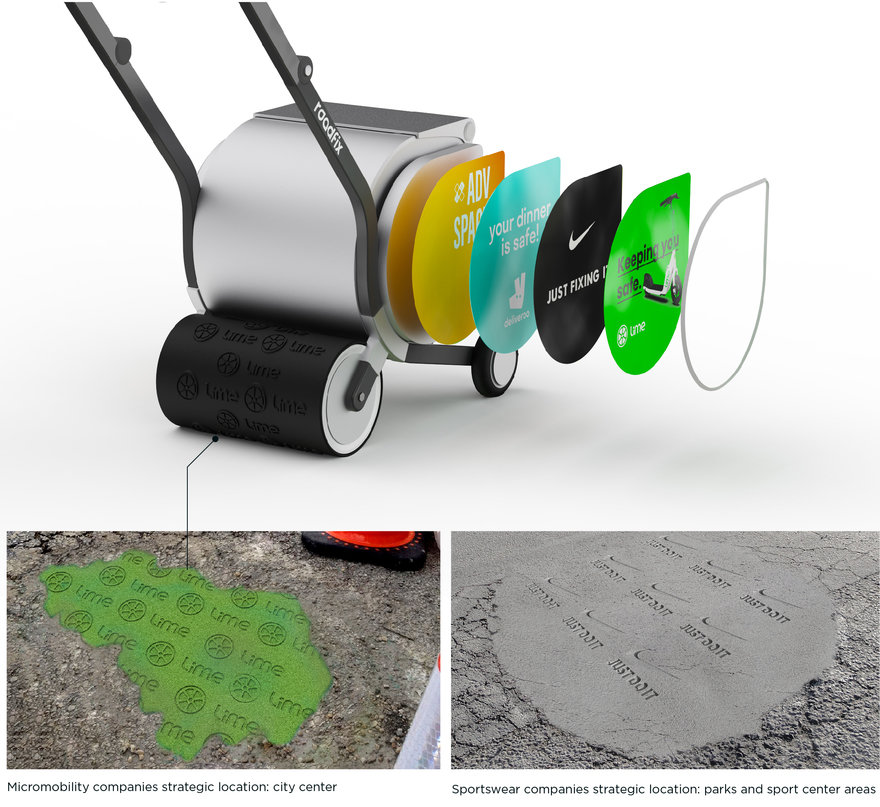 Like most of us, I hate being advertised at. But if the company is at least sponsoring something simple and relatable, like giving us a less bumpy ride home, I'm all for it. And it would allow for cash-strapped municipalities to offset the seemingly never-ending cost of pothole repair. So I'd call this a win-win-win. 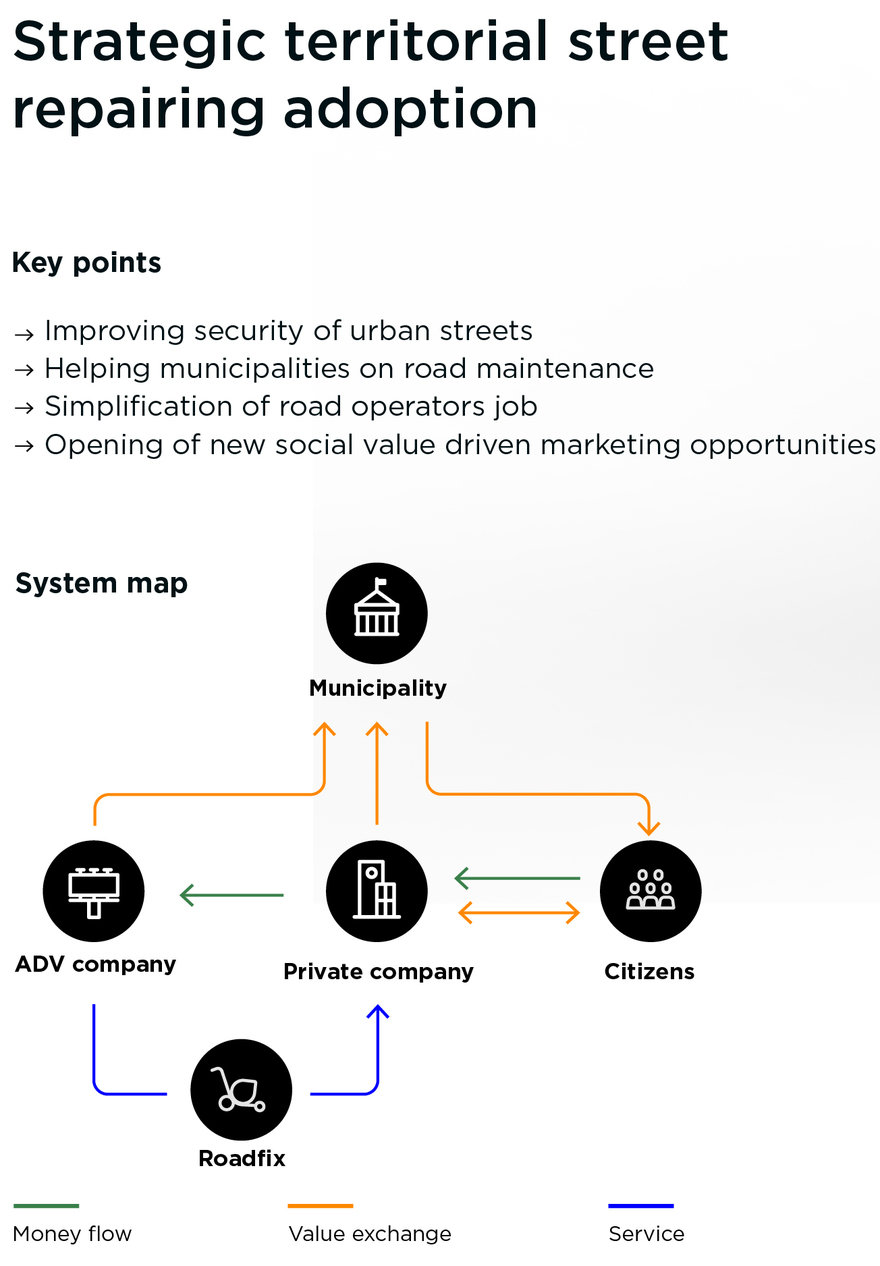 The Roadfix won First Prize in the 2019 Targa Rodlfo Bonetto Design Competition (under its earlier name, the Hole Healer) and is a National Winner in this year's James Dyson Award. Congratulations to the team!

P.S. Here's my best guess as to where their inspiration came from.