I bet you're so familiar with IKEA's iconic POÄNG chair that you can easily draw it from memory: its bent wood, cantilevered frame and simple upholstery create a single, swooping motion in profile. You may have owned it at one point (are sitting in it now, even!), and have a fondness for its little bounce.

You've no doubt also seen it a dozen times abandoned on a sidewalk or alley, hoping for a second chance in someone else's home.

For many people, this is exactly how they envision the end of this chair's life: discarded. But we designers know the sad fact that, once they're plucked from street-side abandonment, too many of our objects end up in a landfill – their ultimate end-of-life – where the chemicals and plastics they were made from will contaminate the air and the watershed.

IKEA knows this too. They also know that, instead of languishing in a landfill, the materials used to make POÄNG could be the raw material banks of the future. They are not sitting still with this knowledge; they've in fact been spending the past couple years redesigning their entire product line for the circular economy. It's quite momentous.

We'll get into that in a minute. But first: since the existing POÄNG product is so ubiquitous and embodies such common manufacturing methods and materials, let's take a preemptive look at exactly what goes into making it, how easily it can currently be repaired, and if the chair is at all designed for disassembly.

Why does the POÄNG seem to be dumped on sidewalks more than the average furniture? IKEA is working on that. Photos: Sarah Templin

If we were to redesign the POÄNG with longevity, repair, and the circular economy in mind, we would start by completing an audit to assess the sustainability of each material and process used.

First, can this product be easily disassembled? For POÄNG, the answer is "yes"; all components can be disassembled. Right on, IKEA.

The chair's hardware can, in fact, be reused or reclaimed as a technical nutrient – but unfortunately, its elements are likely too small to recycle at most residential recycling facilities, which returns responsibility to the consumer. Let's consider this a near-win, but definitely not a miss.

Generally speaking, there's a chance that upholstery textiles can be reclaimed too, depending on their make-up. POÄNG uses blended fiber upholstery fabrics, which IKEA could hypothetically make into new fibers (IKEA cites both a 100% polyester fabric and a cotton/viscose/rayon/linen/poly blend). Then there's Polyurethane upholstery foam, which the chair is stuffed with. It's notoriously difficult to recycle; at best it can be shredded and down-cycled into carpet padding. And if the upholstery foam is glued to the frame – as is the industry standard with upholstered furniture, though is NOT the case with POÄNG (a win!) – the adhesive prevents both the cushioning and the frame from easily being reclaimed. In other words, there are some gray-area successes in the case of POÄNG's fabric make-up.

On to the bones: if a product frame's veneer is over solid wood, which it is for POÄNG, there are options for reclaiming it. If, in reality, the veneer is over particle board, which is unfortunately an industry standard, it would then be full of toxic chemicals that are harmful to both the employees using them and to the consumer, off-gassing into the home. (Those chemicals seep into the soil and the watershed when the product eventually finds itself at the dump.) Another point for IKEA.

To holistically interpret the sustainability of POÄNG, we also need to assess how easily it can be repaired by a layperson. This involves auditing the ready availability of replacement hardware and cushions, and the ability to refinish its surfaces or to reupholster it entirely. We all know that IKEA does a good job of making replacement hardware available in their stores, so we might be able to repair the chair if necessary. However, for POÄNG in particular, no other replacement parts except for its cushioning are currently available directly from IKEA.

The verdict is that while it has some industry-comparable successful elements, some elements of POÄNG's design would realistically need to be reconsidered to make it a more intentionally sustainable product. IKEA is certainly not alone with this diagnosis; most furniture companies are making their products to meet worse standards, with materials that can't be reclaimed, for objects whose only future is the landfill. 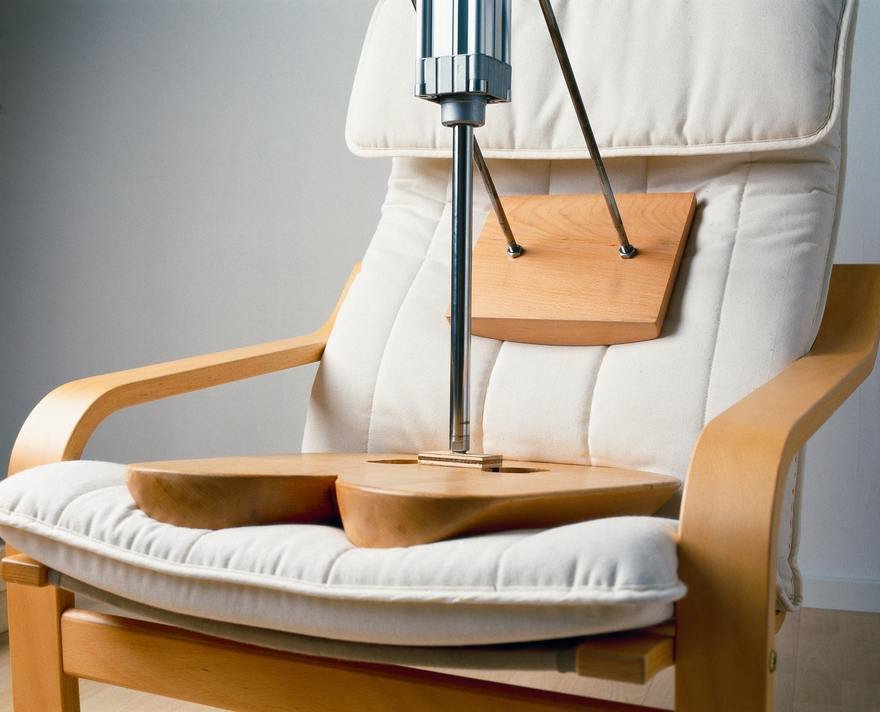 POÄNG is under pressure to live up to IKEA's sustainability goals. Photo: Inter IKEA Systems B.V

What does IKEA have to say about this?

IKEA has ambitious and influential sustainability goals. As the world's largest furniture company, their initiatives have the potential to create a ripple effect across all manufacturing.

Among other things, they have been working to become energy independent by investing heavily in wind and solar power. They launched a buy-back program this year across 27 markets to refurbish and resell used IKEA furniture, with products too beat up to refurbish being recycled into raw material for future products; and they are working towards selling exclusively circular products, with an aggressive deadline of 2030.

On this particular goal, Lena Julle, the company's Sustainability Manager, tells us about the results of assessing the circular capability of over 9,500 products last year. "POÄNG was one of the products. We learned a lot about what works well today, and what we will need to update to reach our 2030 goal to sell 100% circular products." Just as our audit showed, their research found that the chair performs well against the standards of circularity, but that it falls short of being all-the-way there. "The circularity score of this product can be improved," Julle says, "by applying more standardized parts, and using more recycled or renewable material in the cushion." IKEA identifying these clear, actionable steps forward for their product is not only progressive, it is also radically hopeful.

The amazing thing about the infamous IKEA home assembly

In a way, Design for Disassembly (DfD) has always been part of IKEA's design philosophy, even if they weren't necessarily thinking of it that way. Speaking to their history of designing flat pack objects for home assembly, Julle notes that "it is also relatively easy to take steps in designing these same products to be disassembled." Having this design precedent has, in turn, made DfD very intuitive for their design team.

But anyone who has ever tried to move an IKEA bookshelf from one home to another might have a different issue in mind, one from which Julle doesn't shy away: "The big challenge lies in designing products that are possible to put back together and continue to look and function as they did before they were taken apart." With these co-standards in mind, the company eventually altered the way it thinks about circularity, revising their design principles to now include assembly, disassembly and reassembly. "This is a game-changer in enabling reuse, refurbishment, and remanufacturing, as well as continuing to enable recycling at the end of product life," says Julle. "This is the true opportunity in prolonging product life." 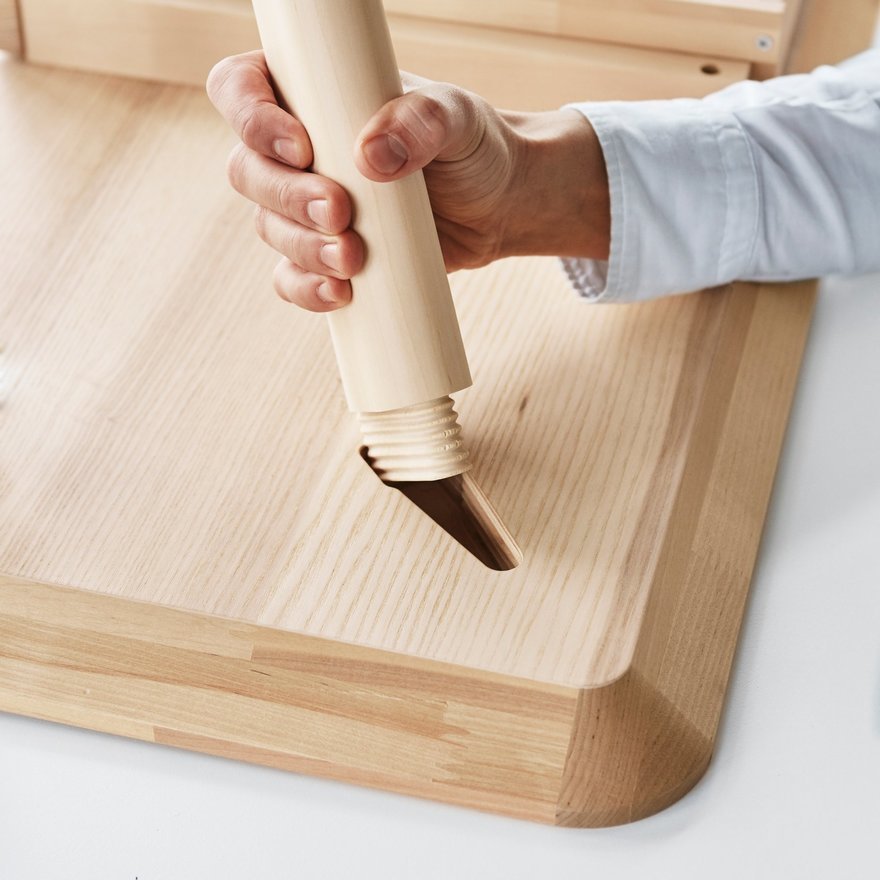 With this new mantra in mind, 5 years ago IKEA introduced their wedge dowel. The proprietary wood joinery and milled grooves design was developed through craft-based, trial-and-error iterations by the brother-sister in-house designers Marianne and Knut Hagberg. The dowel is a prime example of how turning to traditional design methodologies updated a major brand's product for a more effective future. Its design allows a table to be easily assembled and disassembled without tools, hardware, or the risk of the joints getting dinged up. It's a triple win: this method reduces the material used in the design, prolongs the potential life span of the furniture, and simplifies the assembly and disassembly experience.

IKEA's commitments and implementations are not only newsworthy, they're also roadmaps. Many of the approaches they mention as crucial elements of their future planning— like audits and contemporary adaptations of traditional joinery— are in fact simple, straightforward methods rooted in centuries of design. In turn, the power in their design decisions is accessible to much of the industry across the board – it's up to us, as designers, to harness it.