The "diligence" passenger cabin could be switched from horses to trains

As modern cars all start to look the same, it's fun to look backwards in time, when society was still experimenting with different form factors for efficiently transporting people and goods. After we tired of riding horses but before we had switched entirely to trains, there was a window of time where this nifty intermodal vehicle existed in France, circa the early 1800s: 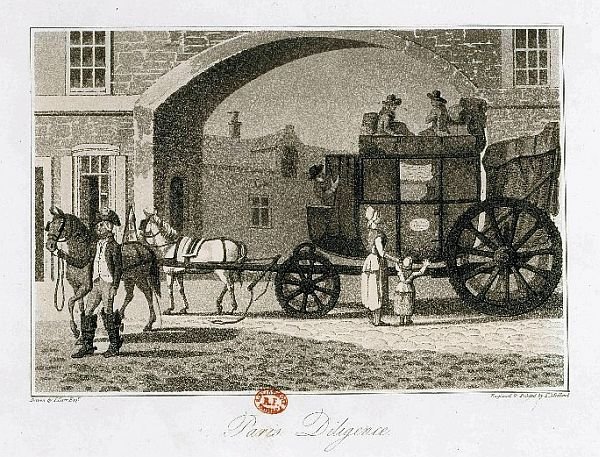 What we would call a stagecoach in English, they called a diligence in French, and the French design had an interesting feature. In the image below, a diligence is parked under a gantry, and the carriage is being lifted off of the wheeled frame so that it can be transported sideways and dropped onto a railway carriage. 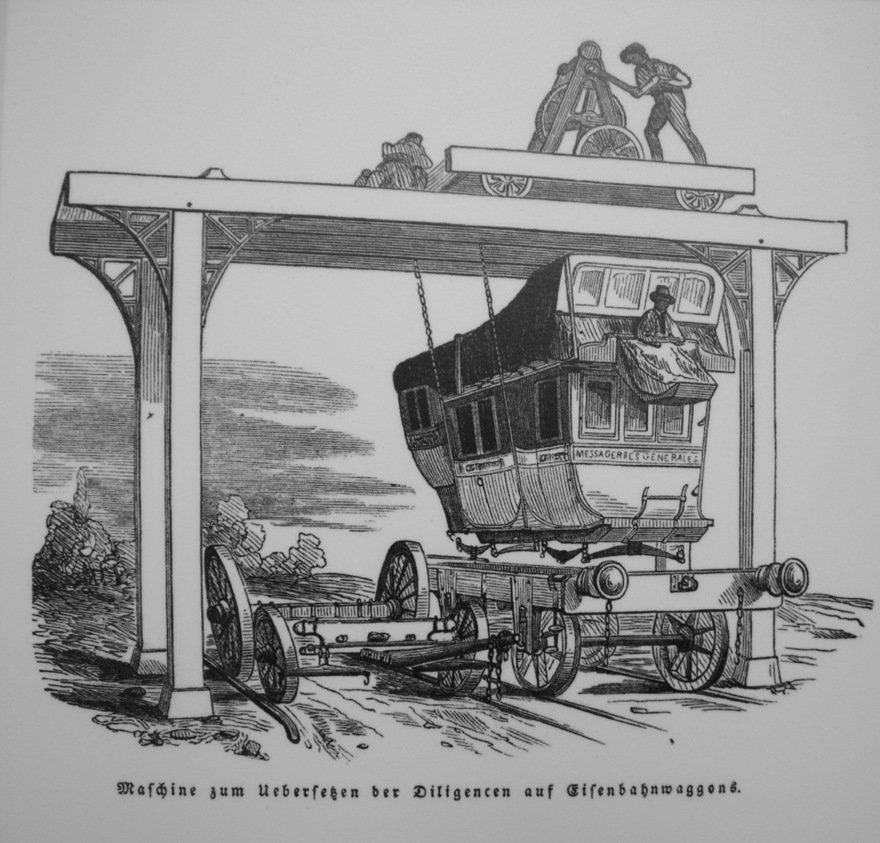 Image: Mattes. "Stagecoach being transferred to a railway car with a simple Portainer. This is an example of early Intermodal freight transport by the French Mail 1844. The picture is exhibited in Deutsches Museum Verkehrszentrum, Munich, Germany."

British traveler Sir John Carr visited France in 1802, sketching as he traveled, and documented his experiences in a book called "The Stranger in France." (You can leaf through an upload of the book here for free, complete with his sketches.) In Chapter Four of this book, "Cheap Traveling to Paris," Carr gives us a glimpse at the design of the diligence: 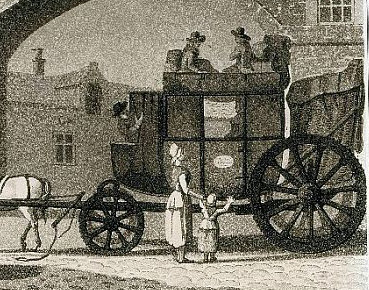 "In the front is a cabriolet fixed to the body of the coach, for the accommodation of three passengers, who are protected from the rain above, by the projecting roof of the coach, and in front by two heavy curtains of leather, well oiled, and smelling somewhat offensively, fastened to the roof."

So these were the front seats, protected from the elements by only a roof overhang and leather curtains.

"The inside, which is capacious, and lofty, and will hold six people with great comfort, is lined with leather padded, and surrounded with little pockets, in which the travellers deposit their bread, snuff, night caps, and pocket handkerchiefs, which generally enjoy each others company in the same delicate depositary."

I would've greatly loved to see these 19th-century cupholders and glove compartments, but unfortunately Carr did not sketch them.

"From the roof depends a large net work, which is generally crouded with hats, swords, and band boxes, the whole is convenient, and when all parties are seated and arranged, the accommodations are by no means unpleasant."

Overhead nets rather than overhead bins is a lightweight, economical solution to storage. Not to mention you could look up to see where your sword was.

"Upon the roof, on the outside, is the imperial, which is generally filled with six or seven persons more, and a heap of luggage, which latter also occupies the basket, and generally presents a pile, half as high again as the coach, which is secured by ropes and chains, tightened by a large iron windlass, which also constitutes another appendage of this moving mass."

So it looks like inside the cabin was business class, and up top was, well, "coach." No protection from the elements, though I guess the view was probably better.

I've searched for more images of diligences and am having a tough time finding any, due to the ambiguity of the name. If any French-literate readers have better ways to search, please mention it in the comments; I'd love to add more images.