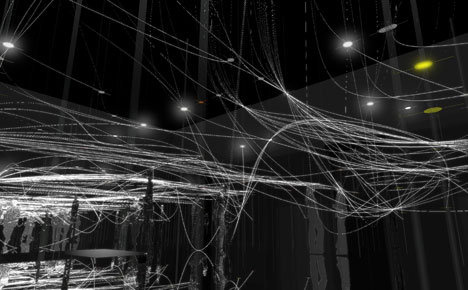 Alex Haw is an architect, teacher, writer and video maker operating at the intersection of design, research, art and the urban environment. Working from a consistent theme regarding the culture of voyeurisms in contemporary society, the 34 year-old researches the possibilities of electronic media, video installations and the built environment in work that moves seamlessly between Art and Architecture.

Using raw data to produce dramatic visual effects, Haw's recent project, Incel, at the Frankfurt Stock Exchange (or Borse) juxtaposes the fortification of the Borse with the fortification of a nearby prison to produce luminous data spatialisation. The allure of data in the distance is mediated by major systems of spatial control. Incel examines the way the Deutsche Borse is represented in space by reassessing the familiar & ubiquitous DAX graph suggesting the extensive use of the same optical fibers that the system relays through.

Seeking to convey the richness and intensity of the activity visible of the Frankfurt Borse, and to scrutinize the detail of the intensity with which it fluctuates, Incel maps 1,500 of the dynamic instruments on the Exchange, subdividing them exponentially by the dominant sorting systems.

More after the jump. 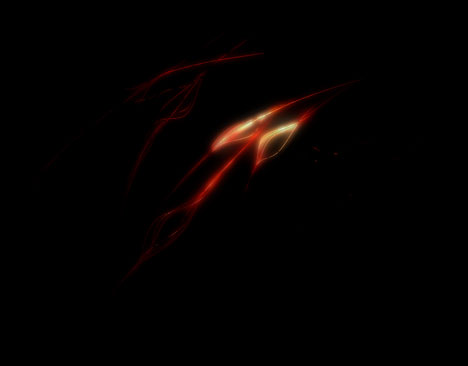 In two of his recent projects, Haw employs surveillance technology as a way of celebrating the collective behavior of humans to create ambitious and visually striking installations from security camera footage and other surveillance data.

Light Hive is an installation made up of a 3 dimensional matrix of more than 1,000 LEDs that he created for the AA last April. The intensity of light emitted by the LEDs varied continually, responding to the movement of people and their use of light sources within the building. 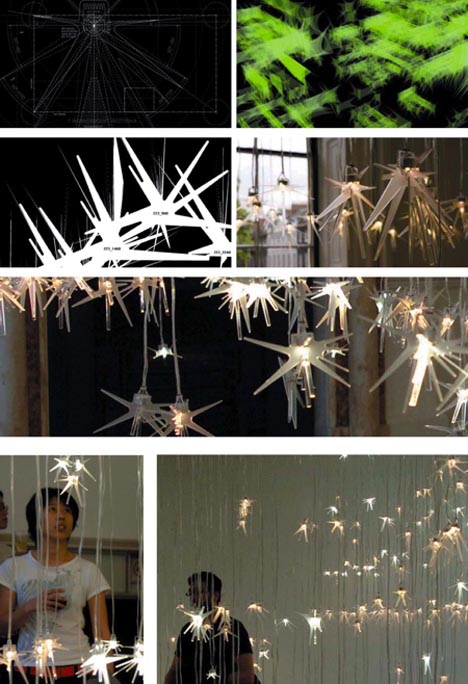 A collaboration last spring with video artist Mauritius Seeger entitled 'Hurry Up Please: IT'S TIME' explores the distortion of time and space, tracking bar drinkers to create a composite temporal image of activity and offers an expansion on the drinker's eternal concern for questions of time (that pressing pint; the tyranny of Last Orders).

A statement from the artists reads:

A camera above the bar scans it for activity. Computer vision compares pixels adjacent in time and calculates the geography of activity. A co-located overhead projection then remaps the scene with abstracted, responsive imagery, conjuring a composite temporal image. Active drinkers are rewarded with faster imagery, updating in real-time, whilst inactive parts of the bar and screen slumber in archival mode, dormant until activity is intense enough to accelerate playback into real-time. Boozers, bingers and barflies collaborate to produce a 4-dimensional document of space and time.