When Lexus approached architect, designer and University of Miami professor Germane Barnes to do an installation for Design Miami 2021, he knew one thing was for sure—getting his students involved was an imperative. 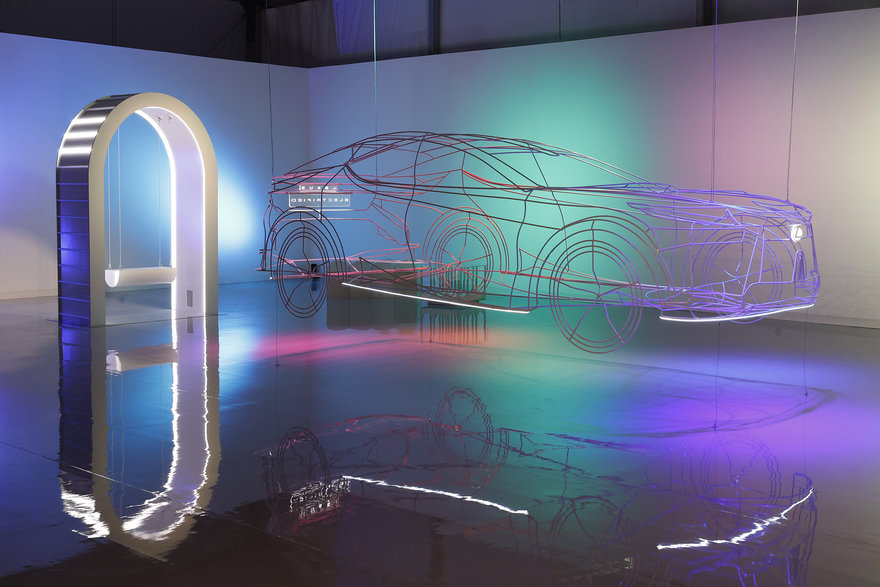 A dynamic view of the Lexus ON/ installation, featuring an interactive swing any fairgoer can engage with

After receiving a brief by Lexus in August, Barne's studio—a mix of designers and a select number of some of his students at University of Miami—quickly got to work. The final result that launched last week at Design Miami is called "ON/", described by Lexus as "a vision for an electrified, carbon-neutral and human-centered future."

The installation, parked within the Design Miami space, is centered around the Lexus LF-Z Electrified Concept. The LF-Z is a design revealed earlier this year that projects some of Lexus's goals when it comes to electrification and customization, all set to be made available to customers by 2025. Some of the features of the LF-Z includes artificial intelligence using dialogue with the driver to learn their personal preferences and behaviors, a longitudinal positioning of the battery below the floor that helps absorb noise and vibration from the road, and a DIRECT4 system allowing for independent control of all four wheels. 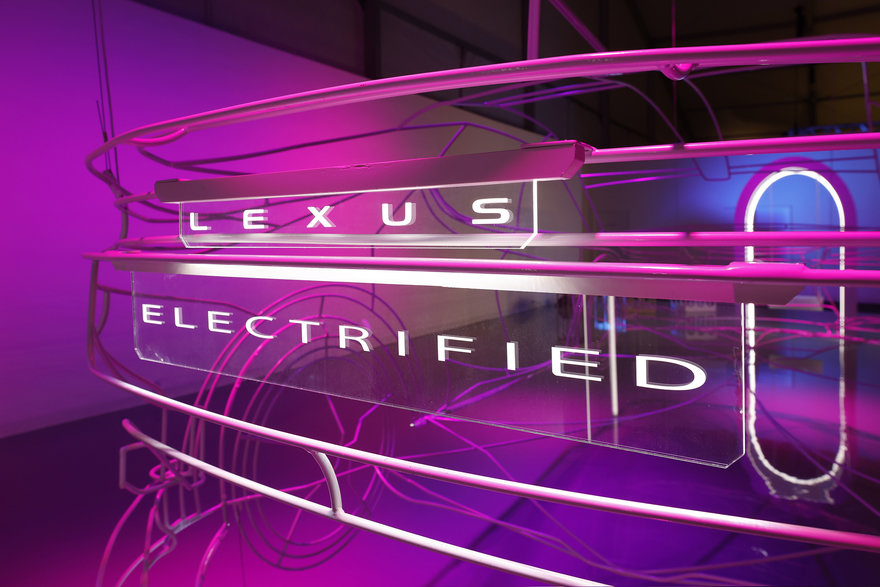 Though Lexus has displayed at DesignMiami for four years now, 2021 marks its first with a booth not physically featuring one of their vehicles—a conscious choice when it comes to sustainability. This detail became a central point of inspiration for Barnes, who said in the brief, "the most important thing [Lexus] said was there has to be the full scale version of the car; in the show in the past, that meant that physical car itself. When I asked them where the car was, they said it was in Australia, or somewhere very far away. It seemed foolish to ship a car from there all the way here, and to incur tons of carbon emissions when the entire purpose of the car is carbon neutrality. And so I asked them, 'does it have to be the real car?'" The answer from Lexus was no, and that got the wheels turning for him and the team.

After an initial idea of 3D printing an entire car, Barnes eventually worked with Portland-based Matchless Builds to realize a 1:1 scale, welded steel wireframe of the LF-Z, elegantly suspended in the middle of the booth. Once figuring out what to do about the model of the LF-Z, he called in students for reinforcement. 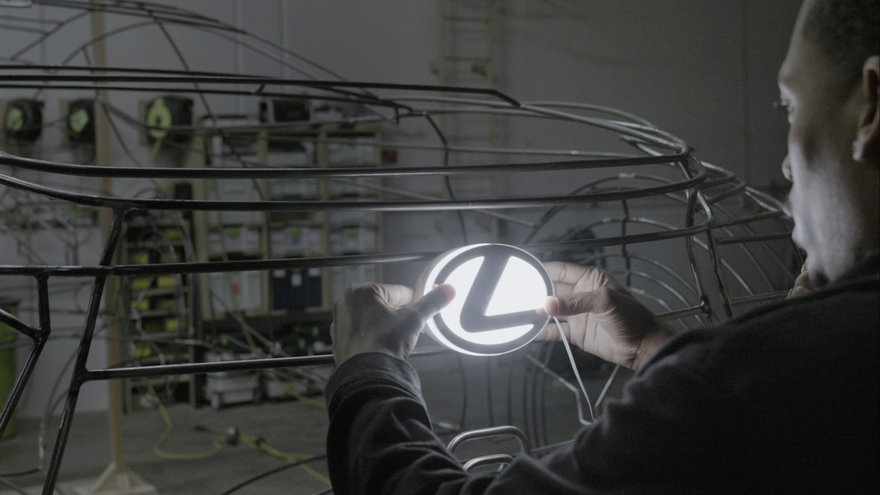 Barnes worked with Indrit Alushani, Rodolphe el-Koury, and three of his architecture students—Isabella Adelsohn, Mahlia Jenkins, and Andrea Martinez—to then come up with accompanying design details for the booth. Barnes says, "I was trying to figure out a way to make the booth more interactive, because we discussed wanting some moment that highlighted a regular fairgoer rather than the patron. How can they engage with the information? I was like, 'oh, swings could be really cool.'" So Barnes had his team of students each sketch out five to six different sets of swings, ultimately coming up with a simple yet modern swing that hung underneath an austere white arch. Student Andrea Martinez initially came up with the idea of an arch as a recurring motif, which set the team in motion for creating a number of furniture pieces that all worked together. Sketches were handed back and forth between the team to refine designs and get to the final furniture ideas. "With this project, it truly was a collaborative environment," Barnes mentions. 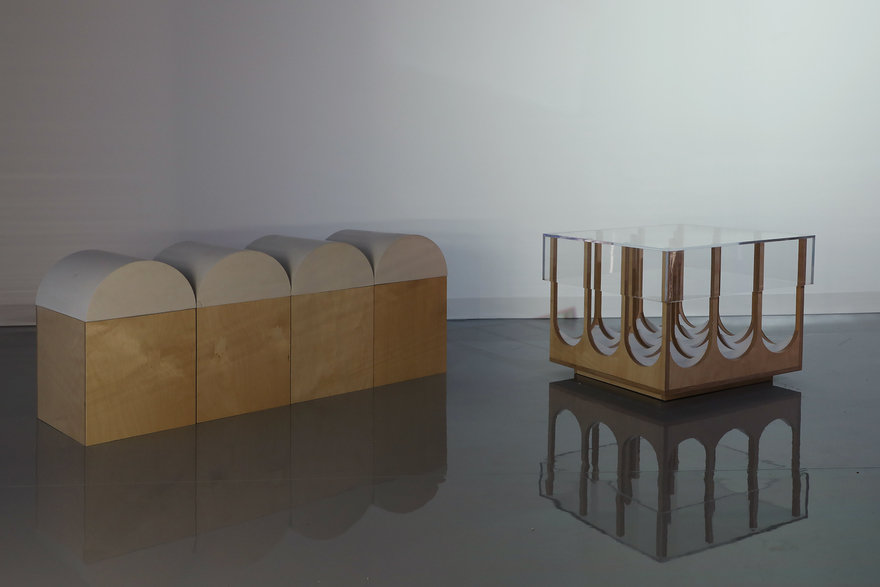 Furniture pieces within the Lexus ON/ installation, designed by University of Miami students

When it comes to his academic work, Barnes says he couldn't have gotten where he was without the help of certain professors along the way, and always wants to find ways to pay it forward within his studio work. He's used his position as the Director of the Community Housing Identity Lab (CHIL) at University of Miami to also ensure students who need financial assistance are cared for. Barnes says he has "a personal mission with my lab for students who have to work quite a few jobs in order to afford an architecture education, and not have to do those jobs by working in my lab instead. That way, they're getting applicable work experience and working on really cool projects, but it's not taking away from them to actually get their work done. That's what typically happens when you're under-resourced financially."

When asked what he hoped his students gleaned the most out of working on a project like this, Barnes said working with commercial clients before you graduate can be an indispensable experience, noting, "in the end, [the students] know what it's like to work with the client now, right? They're working hand in hand with clients who are telling them, 'no, I don't like that, or you're over budget.'" 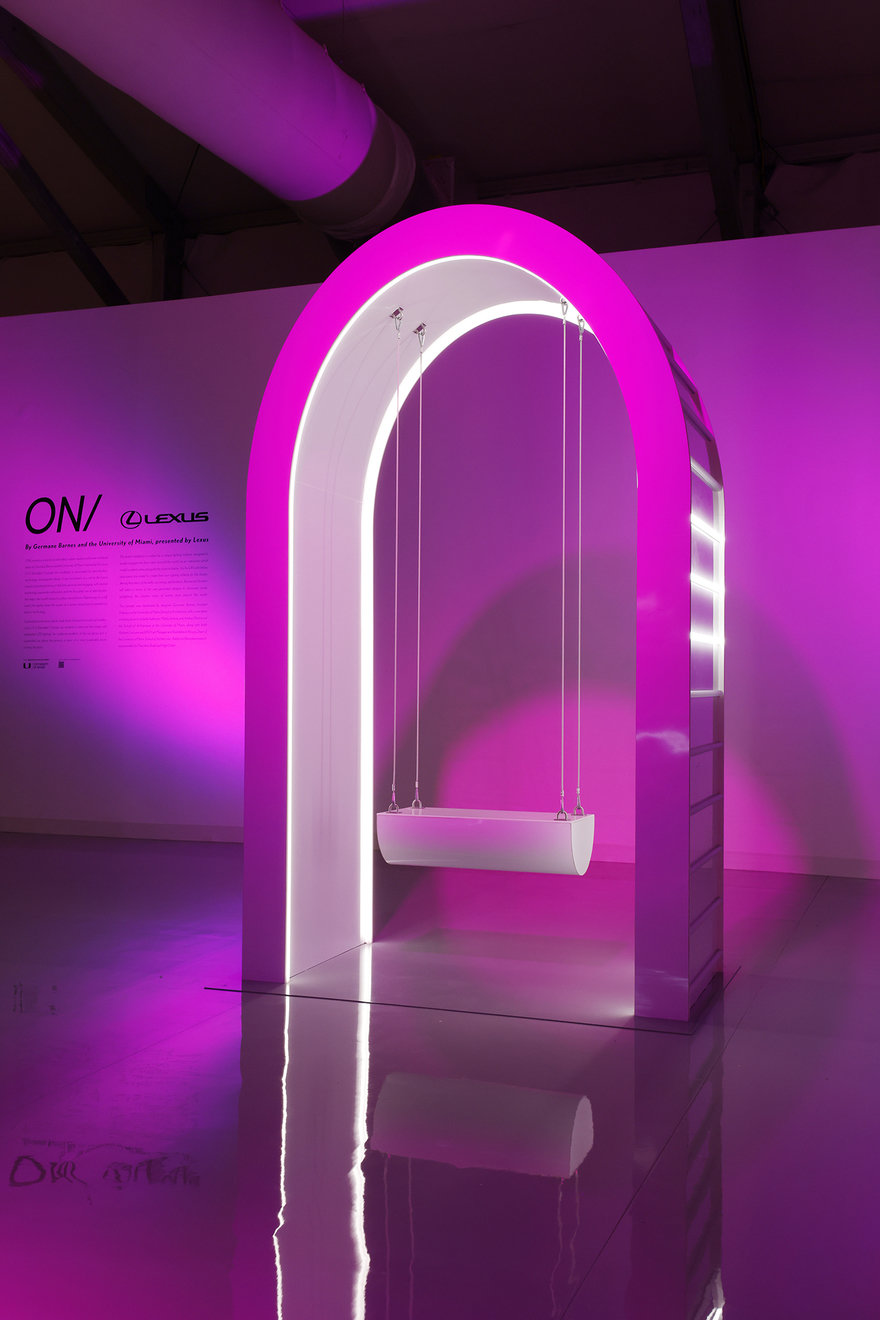 But he also emphasizes that with projects like this, another huge lesson for students is one of reciprocity. Barnes says, "I give opportunities to these 20-to-21 year old students in their second, third or fourth year that I had never gotten to show that when you get the opportunity to help someone else, you don't turn your back. Pay it forward, because we're in a field that marginalizes a lot of people... So I want my students to really understand that they have the power to change the profession."

And in turn, the Lexus ON/ installation got a burst of fresh creative energy thanks to the inspired minds of students. Lexus International General Manager Brian Bolain was elated about the installation, saying "the arches with the swings surprised me in such a good way. And when the team mentioned it's [symbolic for this] kind of swinging toward the future, hinting that the future is electrified—that's kind of brilliant. So metaphorically, I think it is absolutely everything we wanted to say."