Microfactories for a Mountainous Problem

Each day truckloads of empty bottles, takeout containers, and discarded plastic packaging from around New York's five boroughs arrive at Sims Municipal Recycling in Brooklyn, located on a pier at the entrance to the Gowanus Canal. The facility processes over 2,000 tons of metal, glass and plastic daily, sorting and shipping materials to cities across North America for processing and reclamation. Small mountains of recyclables rise and fall daily as giant cranes scoop appliance-sized jawfuls of refuse onto conveyor belts.

Just offshore from the pier sits an unassuming white shipping container, put there by a team of product designers and engineers who see these plastic mountains as a resource and opportunity to demonstrate a new model for hyper-local and agile manufacturing. Next to a silver field of lavender on a picturesque corner of Governors Island, this retrofitted shipping container seems an unlikely location for a microfactory that aims to make circular manufacturing widely available.

The idea & its genesis Once our recyclables are collected from our bins, they are typically trucked to a material recovery facility (abbreviated as MRF, or murf) such as Sims to be sorted. Once sorted, different materials are then shipped to other facilities to be processed into raw materials such as cut plastic pellets, which are then shipped to other facilities to distribute or turn them into a new product. A single plastic object might circumnavigate the globe before it returns in its recycled form.

As an industrial designer and professor at Parsons School of Design, Barent Roth has long wanted to simplify this process to reduce lead time and carbon footprint.

For years he thought about ways to demonstrate small scale, local, circular manufacturing process using a sustainable energy source. Roth asked himself how the mountains of recycling collected each day from New York City streets might be used right here in town to make new products. Could we create demand for recycled materials by setting up factories next to MRFs so that materials could be reclaimed and remanufactured on-site? Could this even provide jobs and bolster the local economy?

NYC Curb to Market Competition While Roth was pondering his idea, a few miles away entrepreneur Chris Graff was having similar thoughts. Years ago, while sitting on one of the beloved red Adirondack chairs made from recycled milk jugs that are all over Governors Island, he mused over the production inefficiencies that brought these chairs to the island. An expert in efficient manufacturing, he knew that despite NYC having plenty of plastic milk jugs of its own, the particular milk jugs that went into these chairs likely traveled thousands of miles throughout the various steps of the manufacturing process before they finally ended up in their chair form, looking out onto New York Harbor. 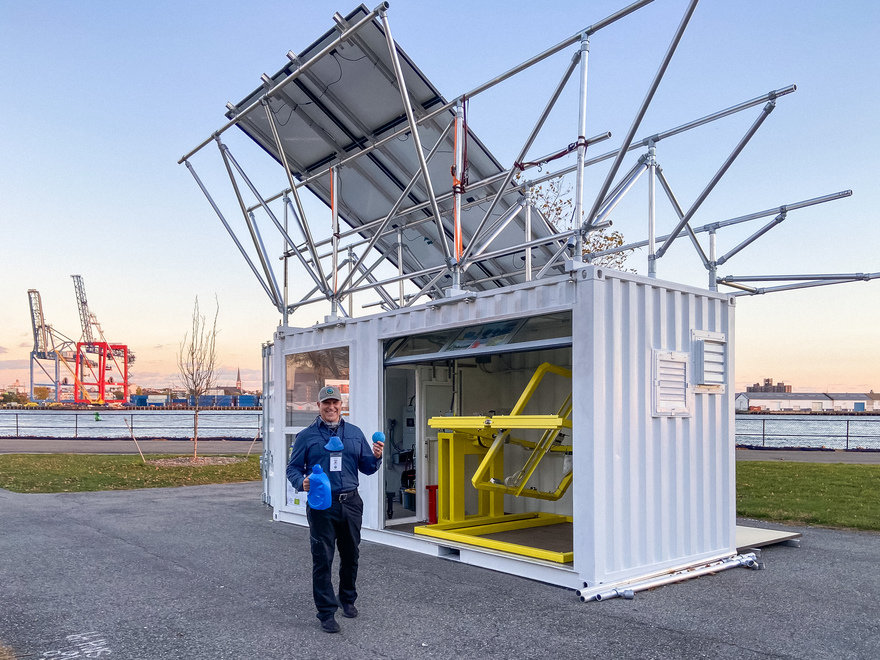 Barent Roth stands with HDPE bottles that are washed, shredded and remolded into products in the microfactory behind him. Photo by Bruce Willen

From these this revelation, Graff conceived the idea for the NYC Curb-To-Market Challenge competition, which solicited proposals for how to convert NYC's waste stream into products for the circular economy.

The competition was a fortuitous opportunity for Roth to test his ideas. He submitted his microfactory concept, focusing on rotational molding with High Density Polyethylene (also known as HPDE or #2 plastic) that is so abundant in our waste streams. HDPE can be recycled repeatedly without losing its durability and, as the ubiquitous plastic that our laundry detergent bottles, milk jugs, juice bottles and so many other household goods are made of, it felt like an obvious place to start.

When he became one of the two winners of the competition, Graff joined up with Roth to be a co-founder, and Circular Economy Manufacturing was officially born. They set up their microfactory on Governors Island, tying the solution back to its place of origin. 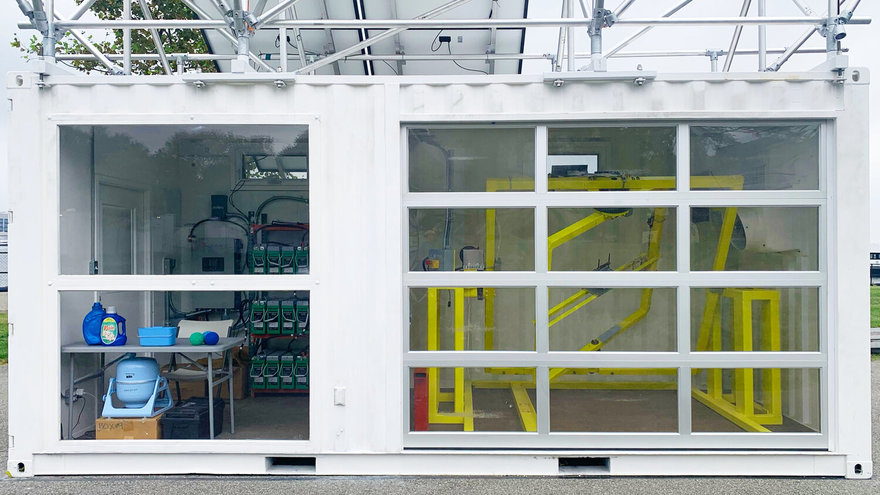 The 24 batteries seen here on the left side of the shipping container store energy from the roof-mounted solar panels, which power the yellow molder, seen on the right, to spin bi-axially and heat the plastic in the mold, seen at the center of the yellow frame. As the plastic heats, it coats the interior of the mold, creating the final form. Photo courtesy of Circular Economy Manufacturing.

How it Works As a professor, Roth has a knack for demonstrating ideas in digestible ways. Display windows and a roll-up door allow passers-by to see the factory in action. "It was important that we had this [wall] be clear. We thought, this whole process is so mesmerizing, let's make sure that we can see that the plastic comes in, gets shredded, gets turned into flakes. We put it in a mold, we spin it around, and you can turn it into products quickly and easily."

The microfactory runs on solar energy and was designed for a modified 20 x 8' shipping container to provide easy transportation. Each container is built to house two rotational molders and can operate fully on solar energy. During a visit to the factory on a chilly November afternoon, Roth spoke to the modular nature of the concept and its practical possibilities for hyperlocal and agile manufacturing. "There's the educational, illustrative aspect to it. If you can do it in a shipping container, then you can do it in a big, large-scale factory. You just need to scale it up. But there's also the functional aspect: if an area needs it right away, we can send you one."

Shredded laundry detergent bottles are placed in the mold (left) and will ultimately look like one of these balls (right), depending on how fine the plastic is shredded. Photos by Bruce Willen

"We wanted it to be easy to deploy so areas that don't have the infrastructure can immediately order one— say it's Puerto Rico [after a hurricane]. We could roll in, set up this operation and they wouldn't even have to be grid tied. They could just be collecting solar energy stored on the batteries and be making stuff from that recycled material within moments of setting up." The idea could be extended to areas without readily available recycling facilities, used to support local economies, perhaps even alleviate supply chain issues. Circular Economy Manufacturing plans to begin producing the factories for companies and municipalities to purchase to address these issues.

But Plastic is Terrible. Why Would We Want to Keep Using It? By this point in the article, many of you might be thinking, "Oh my god enough already. Can we focus on phasing out plastics instead of giving people a false sense of security for using them?"

I asked Roth this very question—he is after all someone who has eliminated most single-use plastics from his life. His perspective is that, "Long term, we want to phase out plastic. But we're so far from that right now. Sims is recycling 1,000 tons of plastic a day. And that's just the stuff that got captured and sorted! I'd love to get everyone to switch to reusables and phase out plastic altogether, but the reality is it's piling up, so until we make that switch, we need solutions like this that create a demand for the recycled materials.