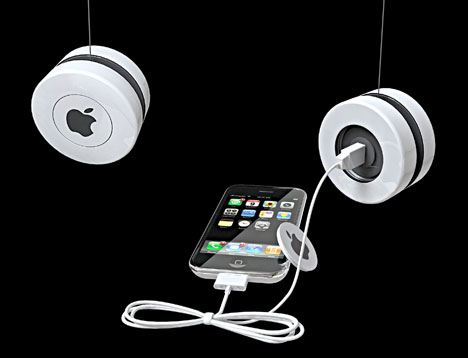 Talk about a GreenerGadget! Swedish designer Peter Thuvander has designed an induction-powered yo-yo charger for iPhones and other Apple handheld devices. Housing a lithium ion cell, and based on the OLPC crank and this dandy wind-up remote, Peter is betting that the physics are close to there. "The remote control needs only 30 cranks--which is nothing when you yo-yo," argues Peter. He's also thinking about what road warriors call "opportunitic charging": "I think I'd at least use it as an emergency device for all the dead iPhone moments I have."

Or at least to change the channel when you've seen one too many "HI, I'm a Mac..." commercials.