Mark Moskovitz's Real Work is a collection of objects and videos that target modern workers who "have lost a meaningful connection to genuine exertion in their daily routine." It's a fictional gym that laments the honest labor lost in the "trade up" (read deal-with-the-devil) for hours in front of the computer. Here's Mark in his own words:

This shift has drained the integrity from our exercise resulting in the simulation based gym phenomenon. The noble desire to eschew idleness has ironically created a machine that goes nowhere and does nothing; on but idling--humming to the arrhythmic tune of isolated beats in isolated headphones. Exercise does have a significant intrinsic value, but we've reinvented, re-valued, and recently re-wired it (think Wii) not as a by-product of an honest gesture, but as a simulation based currency. In the process, we're losing the concrete skills associated with that labor that fulfills our spirit and beautifies our surroundings.

The work is on display at Vertigo Art Space in Denver Colorado until October 15th, but for those of you who can't make it, here are some pieces and artist descriptions below.

More of Marks work is at his site: www.fiftytwothousand.com 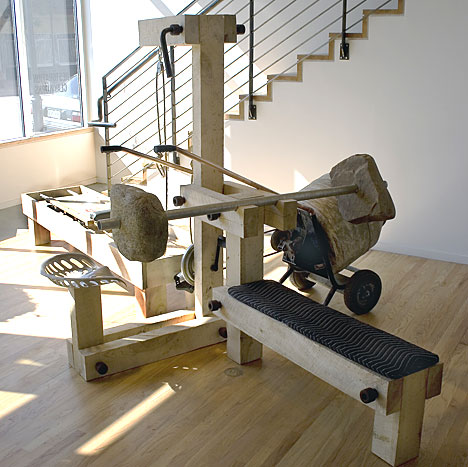 Labor Movement. Labor Movement is the centerpiece of Real Work. It is a machine that reminds us through materials, design, and raw construction that our lives have evolved in such a way that we've compartmentalized exercise so that it suits our schedules but carries little honesty in terms of a holistic, well-rounded life. How many masons or pipefitters would need a gym membership?

Nothing is Better than Something. 2-Channel Video. trt: 6 mins. This video is a head to head competition of dirt collecting between the artist using a Dyson Vacuum and the artist only using his hands and saliva to see who can collect more dirt; essentially a battle between ingenuity through technology and ingenuity through elbow grease. While it doesn't advocate that we trash the concept of the vacuum, it does remind us of an era before we used electricity and machines for everything, even that which didn't necessarily need it. 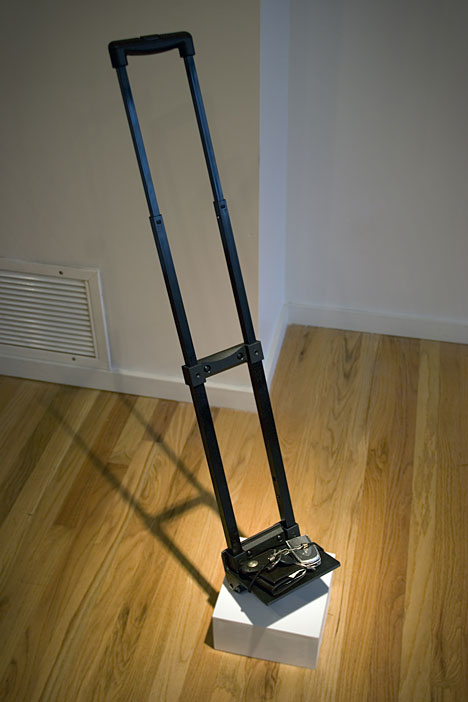 Convenience. Convenience is a wheeled carrier simply for our keys, wallet, and phone, for a day down the line when even carrying this additional weight becomes a burden on us. While wheels have added great convenience to our lives as we float around the globe in an instant, with this object I cynically hesitate to forsake all else for convenience. The model of the business traveling parent has trickled down to our childrens' wheeled book-bags, and all the while we scratch our heads at childhood obesity. 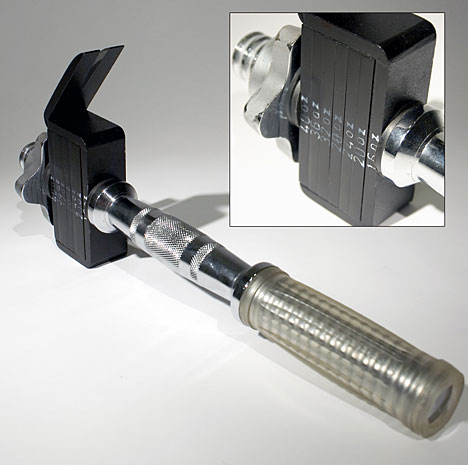 Universal Hammer. This was the original piece in the Real Work series, designed not necessarily as a proposal for a shelf-ready object, but not purely for the gallery either. As a conceptual prototype for an actual hammer, there would be a true benefit in being able to adjust the weight of it for different tasks, rather than having to own many different hammers for different jobs as is the case with carpentry. Beyond utilitarian function, the Universal Hammer was designed to be a catalyst that speaks the languages with which we in the 21st century are more familiar--shiny gym equipment--and those dying with an era when many more of us had basic construction and trade knowledge.