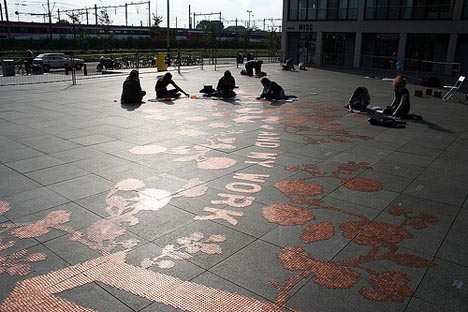 Apparently Police in Amsterdam didn't fully comprehend Sagmeister's contribution to the ExperimentaDesign festival removing his installation — a sentence made from 250,000 Euro cent coins — within 24 hours of it launching. Scott Burnham, creator and curator of the Urban Play project for Droog Design describes the events on his blog.

It seems that the Amsterdam police were called by a resident of one of the overlooking buildings early Sunday morning to report that someone was "stealing an artwork". As the story goes, people were pocketing a few of the coins, which was also expected, but things got a bit out of hand when a resident saw this happening. So the police responded, and, in a rather bizarre instance of police efficiency, they proceeded to "secure" the artwork, by sweeping up the entire installation.

Police are now willing to return the coins and Burnham is seeking suggestions for what to do with them. ExperimentaDesign will run through till November 2nd, surely enough time for a witty response.