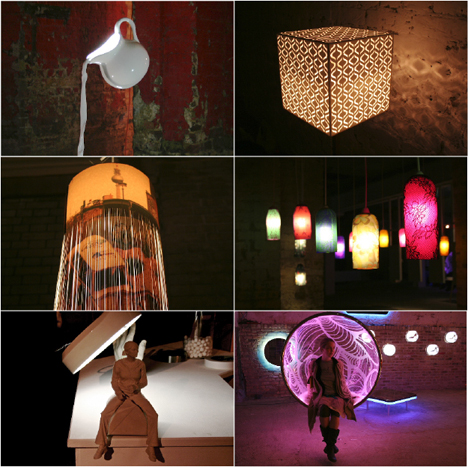 This year during the London Design Festival Designersblock had their show right in the center on Covent Garden's Piazza. A great venue filled with a wild mixture of works from a total of 60 UK and international designers - some of whom we have already shown here in the past view days. Now some more impressions of what was on. In the pictures above are Chooi-Leng Tan's wonderfully surreal pot light, Taschide's intriguing light cube, Hive's Slash Lamp, Tea Un Kim's lamps made from recycled nylon stockings and PET bottles, the Metropolitan Works Creative Industries Centre presenting some of their technology (in this case 3D scanning and stereo lithography) and Ben Rousseau's attempt to revive the 80's perspex-meets-neon-light-look.

Some snapshots of the venue itself - we particularly liked their solution of elevator entertainment! It seemed they played a kind of Designersblock Radio with various interviews (but the journey to the second floor was too short to be sure on this). In the pictures below are some of the products presented by the KithKin Store (created by recent St. Martins graduates): Maria Gil Ulldemolins' easy to light birthday candles, Louise Graham's Added Value adapters to enhance the value of mass produced/packaged consumer goods, Tamsin van Essen's Contaminated set of cups (seemingly infected by bacteria) and Matthew Plummer Fernandez' Sound of Light - a casing for a flourescent tube light, made by recording and graphing one second of the 'hum' sound produced by the light, transferred into a 3D shape.

As usual Designersblock presented a refreshing and unconventional collection of objects and therefore proofed once more its significant role in providing a counter balance to the M.O.R. design stuff to be seen at 100% Design and most other venues during the London Design Festival. 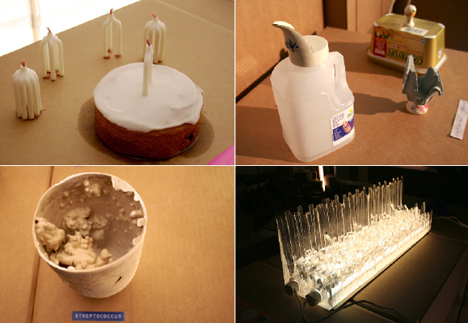