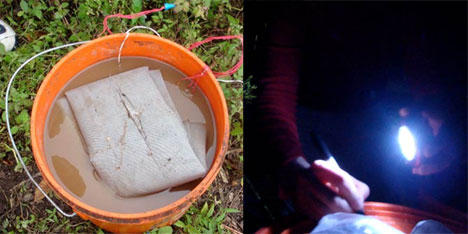 Actually, it's not the dirt itself that creates the electricity in this innovative system, recently featured at MIT Technology Review -- it's the microbes that live there. Microbial fuel cells have been "more or less a laboratory curiosity" for some time now, apparently, harnessing the naturally occurring bugs in soil, manure and waste water to generate very small currents, but the amounts of energy generated were thought to be too low for any practical use.

Lately, though, a Massachusetts startup called Lebone Solutions, with the backing of a World Bank grant, has begun taking microbial electricity to an environment to which it is uniquely suited: rural African villages with no electric grid and plenty of battery-powered electronics.

As cell phones, radios and LED lamps become more pervasive, it's not uncommon for African consumers to purchase them even when that means a long walk to the nearest generator to recharge it -- the benefits are simply that great. Despite its low output, the microbial power solution has a few characteristics that make it especially appropriate: low initial cost, readily available materials, and low maintenance. As Base of the Pyramid markets become a bigger deal, look to unfamiliar technologies like this to help light their way.