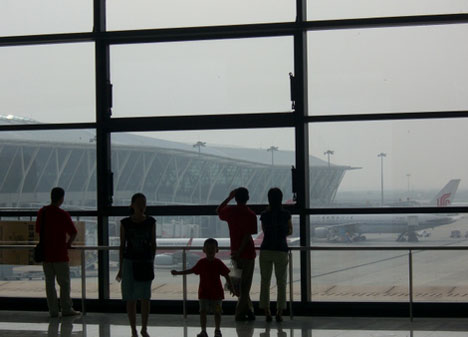 Apparently it's Design Fair season on the Pacific Rim. While Core is keeping an eye on the Seoul Design Olympiad in Korea, Frog's Design Mind blog just wrapped up a visit to the Shenzhen Original Design Fair a few thousand miles south of there, with some interesting observations.

The author, Tim Leberecht, reports a consensus among local and visiting designers that "China's main challenge on its path from a manufacturing economy to an information economy to a creative economy is not the lack of talent (which is abundant), but rather to unlock, reward, and translate this talent into tangible outcomes," an assessment we've heard in some for several years now. As creative professionals wait on pins and needles for China's prodigious educational and manufacturing capacity to start manifesting designers who can innovate rings around us, Leberecht casts the obstacle primarily as one of branding:

China has passed Germany to stand fifth in international new patent rankings. In absolute numbers, it spends more on R&D than Japan (in fact, only the U.S. spends more). But it lags behind in break-through innovations, and it can't count a whopping 30% of its workforce as members of the "creative class" as the US can. China has a branding challenge. It wants to move from "Made in China" to "Created in China." The reason is pragmatic: With the development of the market and changing demands for products, the seller's market has become a buyer's market and competition in the manufacturing industry has become fierce. In a TV-interview with a nationwide business channel I was asked for my recommendations to THE most pressing question that is beleaguering Chinese companies and economists these days: How can OEMs and ODMs become OBMs and create sustained brand loyalty based on differentiation and excellence and not just volatile competitive advantages derived from low-cost manufacturing efficiencies?

>>Read the answer (and the rest of post) here.