Reach Out and Touch the Metaverse with Your Bare Hands 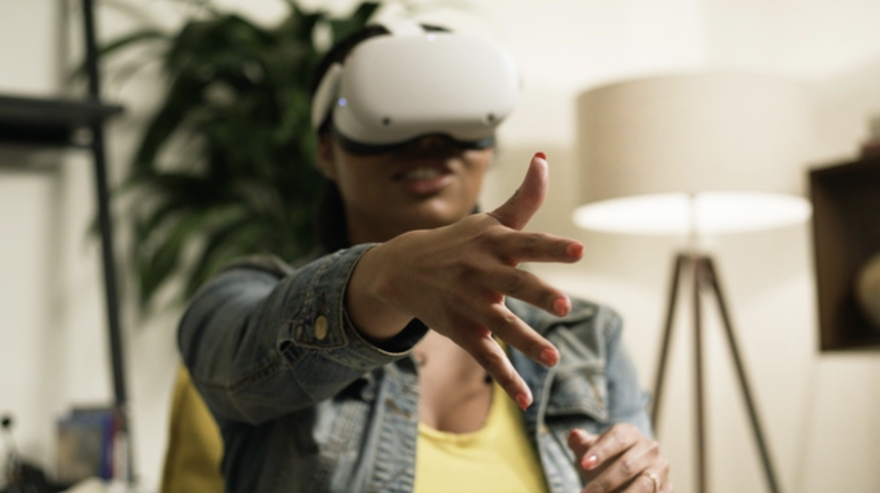 What does it mean to feel connected? The creators of Emerge seek to answer the most compelling question of the COVID-19 era with a device that fuses VR with ultrasonic waves to bring the sensation of touch to virtual experiences. Available on Kickstarter until April 9, its creators have called this immersive kit "the next shift in human interaction," offering users an innovative way to engage in chat rooms and long-distance calls and to reach out to loved ones via virtual reality. 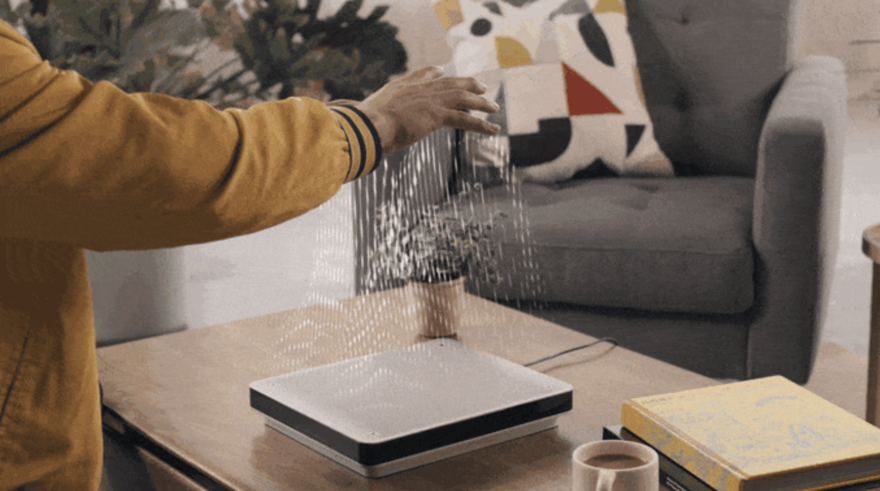 A new kind of games night

Emerge intends to make virtual gatherings more meaningful by allowing users to interact with companions using ultrasonic waves that simulate the sensation of touching a physical object. The Emerge Wave-1 device, a solid base that can live on almost any flat surface, projects an invisible field of sound that can recreate the contours of virtual objects, rendering them able to be sensed and felt similar to real objects. The projected force field can then be experienced up to three feet above and 120 degrees surrounding the Wave-1, all controlled via the Emerge Home mobile app.

"We're not attempting to recreate real-life textures or solid materials," explains the team on their campaign page. "We're creating a new language of touch in the virtual world."

"Tactility starts with a single point," they add, noting that the technology can be felt through custom experiences like "a rush of precise mid-air pressure when you reach out to hold someone's hand" or in the context of a videogame, "an energetic beam that you can direct with your palm to destroy incoming asteroids." 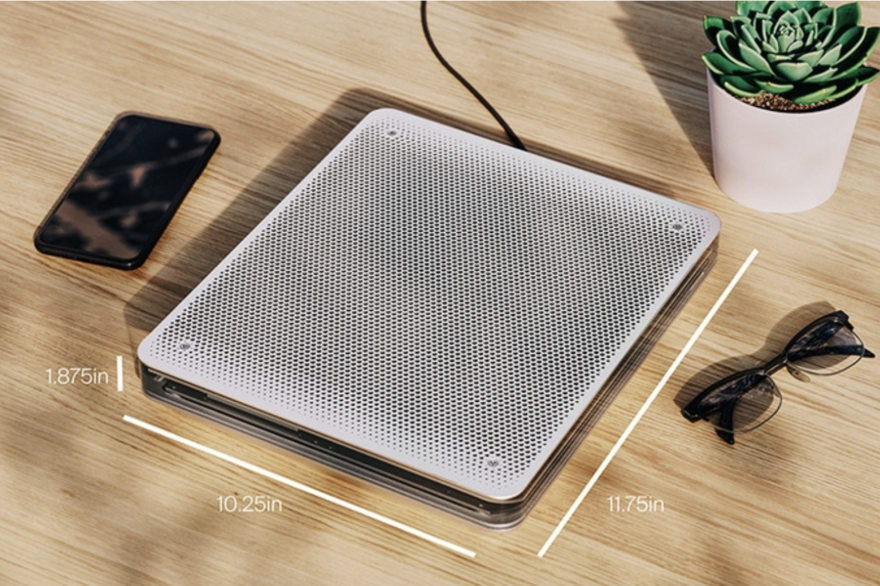 The tools of immersion

Co-creator Sly Lee explains that a good analogy for Emerge's system is the experience of attending a concert in that spectators are able to have a 360 music experience through the subtle (and sometimes not so subtle!) sonic vibrations of, say, a rockin electric guitar riff or even a bass-heavy amplifier. "Essentially, ultrasound and sound are mechanical waves that carry pressure as they move. So when they heat the skin, the pressure they create can then be felt. Like a caress," he says, noting that this sensation will not necessarily create resistance but can exert enough pressure to give the feeling that an object is present. "We can map users' objects in front of them with a tactile layer. So whatever you see nearby, you can then feel with your hands."

Behind Emerge Wave-1 is a team that consists of Lee, co-creator Franco De Cesare, several acoustics physicists, a telecommunications engineer with a background in ultrasonic medical systems, a consumer electronics expert, and two members that worked on the James Webb telescope. To create the kit, the group programmed the system with coordinates that translate into volumetric tactile effects, essentially letting you go beyond vision alone to maneuver through digital spaces. The device also allows for up to seven invited attendees at a time within its "Center," a virtual gathering space. Visitors can then choose to stay, relax, and catch up or move on to the "Game Room" to compete or collaborate in various tactile-first challenges, often facilitated using the Oculus Quest 2 headset. 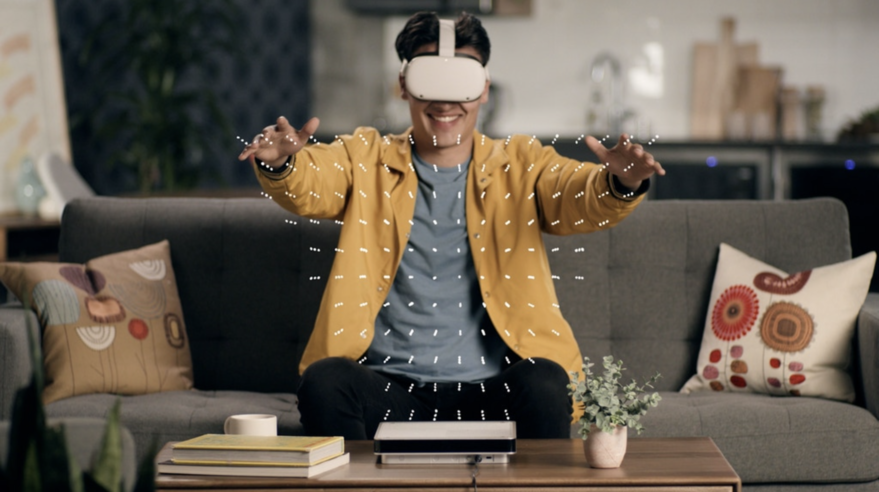 Setting a course for a new journey

Lee's first venture into the world of VR was somewhat unconventional. In his previous life, he founded an oceans-focused educational tech nonprofit called The Hydrous, which sought to capture 3D scans of underworld habitats and place them within the virtual world. "We were doing things like 3D-capturing coral reefs and battleships for educational purposes, funded by places like Autodesk and Google. I started to cut my teeth on working with frontier technologies."

In 2015, Lee met De Cesare at a Silicon Valley summer program sponsored by Google X and NASA, created to matchmake tech entrepreneurs seeking to use new technology to improve people's lives. "But," he jokes, "we really connected on the soccer field." The creators bonded over the shared experience of growing up in immigrant families and being far from the people they loved–as well as the technical limits of staying connected. They also came to realize that distance can be distilled into two main components: "The fact of geographical distance and the mental perception of distance," says De Cesare. "We were far apart from our loved ones and felt the company we wanted to build together should attempt a new paradigm of having connections in a meaningful way." 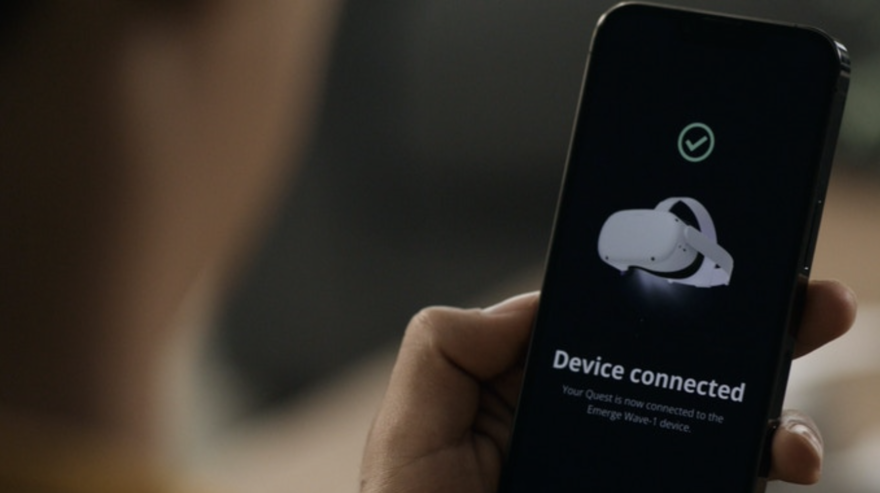 "We didn't feel satisfied with just building another mobile app that enabled better texting or voice chat," says Lee. "Instead, we thought about creating that emotional connection. We are grateful to this technology, to video call systems like Zoom and Skype. But when I tried to communicate with my family and friends, my tools were limited." They realized they wanted something more, and that the core of the human experience, a sense of touch, was missing. "Why can't I send a caress to my mom when I'm thinking of her?" Lee laments. As Covid-19 disrupted lives and separated families globally, they saw new types of behaviors developing online, which gave them the idea, and the confidence, to launch Emerge on Kickstarter in 2022.

"Instead of taking technology out of academia and trying to commercialize that, we started with the problem we wanted to solve," he continues. "We wanted to develop a technology to help with the problems we personally were facing." The pair explain that for them, partnering with Kickstarter and its community of early adopters was critical not just for funding but also to stay engaged and inspired. To share what they had discovered with like minds. "[We wanted] the community to share in our excitement about this moment." And, as some could say, this is the kind of excitement you can actually feel.

Emerge is available on Kickstarter until April 9.