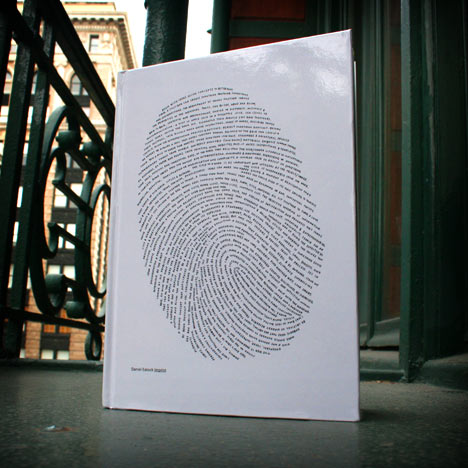 The inside cover of Daniel Eatock's monograph Imprint is covered with a rather exhaustive list of tasks that could be construed as either design projects or performance art pieces depending upon one's point of view. While certain items like "I have spent twenty-four hours in a pitch-black room, lying on a mattress with ear plugs in my ears, without eating or visiting the toilet," suggest David Blaine's feats of endurance, others stray from conceptual art into true iterative design. While his project to draw ten thousand circles by hand before selecting the best one sounds like an introductory sketching exercise (and the final circle is indeed nearly Zen in its perfection), the ream of A3 paper consisting of the other 9,999 imperfect circles stands as the real piece of art. 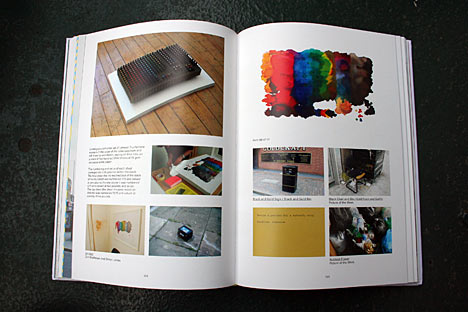 In the accompanying text Eatock admits that he's not an intuitive sketcher, instead describing the ideas behind his work as the true art. Instead I would posit that his process stands as his most substantial artistic achievement. Sometimes, the idea and the output fuse perfectly, like arranging an entire set of Letraset Pantone Markers according to the color spectrum and leaving them open to bleed into 500 sheets of paper. The resulting set of prints was both aesthetically pleasing and, I assume, easily numbered. Inviting participants to help to manufacture "the world's largest signed and numbered artwork" by signing and numbering labels themselves, however, is more intellectually than aesthetically interesting. Eatock works and has trained as a graphic artist, so his output isn't industrial design by any stretch of the imagination, but the process is the same. In effect, Eatock has made the process of the art into the art, and the results are both inspirational and humbling. I once heard that looking at a Picasso makes one want to paint, but looking at Rembrandt makes one want to quit. Miraculously, reviewing Eatock's prolific output manifests both urges at the same time. For any designer struggling to find a place to start, reading Imprint should be ample proof that almost any starting point will look brilliant in retrospect, provided that enough work, practice and repetition went into the final product. 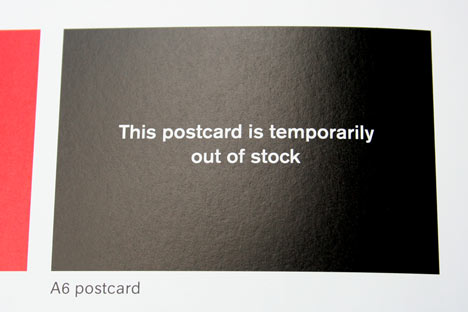 Eatock's art should be appealing to industrial designers precisely because, as art, it's allowed to be as much about the process as about the finished product. In fine or modern art circles, practice dictates that it's ok to know the backstory of the artist at the time. Without depression, tragedy, emotion and absinthe, the end results of Van Gogh's work simply wouldn't be as meaningful. While some of Eatock's projects stem from deep love or admiration, it's hard to imagine that someone depressed could be so productive. Precisely because there's no pain or failure as an undercurrent, however, the idea must be evident in many of the finished products. There's often a humorous or ironic undercurrent, and, as with most good ideas, an afterthought of "why didn't I think of that?" One striking piece is a jigsaw puzzle consisting of hundreds of unassembled puzzle pieces messed up across a white floor. While the irony of perfectly assembled unassembled pieces comes across in the written word, what can't be accounted for is the visual harmony or pleasure of actually looking at the work.

While the monograph itself isn't arranged in any particular order, one unifying thread is the inclusion of photographs of thematically paired items taken from the streets of Britain (again with the repetition). These photographic montages, like "stop, stop, stop," consisting of three stop signs, all on red, clustered on a London road into one crowded photo composition, or "off roader," with an off-road SUV being carted above the road on a truck, ahem, lorry, are often too random or spontaneous for the artist to have captured himself. Instead the artist simply suggested an idea via the collective consciousness of the Internet and let the general public execute his vision. While initially repetition and delegation don't seem to be tightly interconnected in a medium like graphic design, Eatock demonstrates that repetition can consistently yield fruit in any endeavor. He further mirrors the industrial design workflow, by making his art a participatory act. For those of us in industrial design, who don't have the luxury of running hundreds of different prints, the finished product becomes the focus, and both the final prototype and the product run itself are often crafted by someone other than the designer. I sense Eatock would understand. Precisely because it focuses on prolific and varied output, Imprint should serve as an inspiration for those of us who's whole effort comes down to one "perfect" piece.