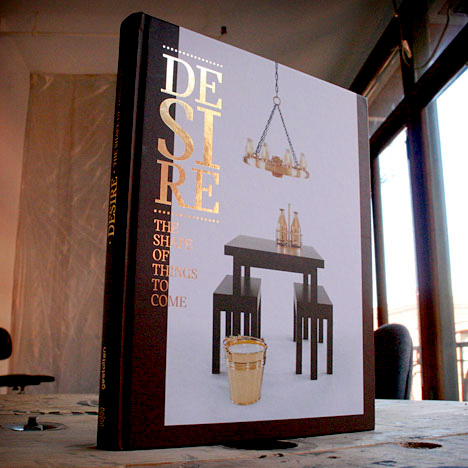 Desire: The Shape of Things to Come, by Gestalten Press is visually interesting on every page. The oddly framed and somewhat flat front cover's picture of simple wooden furniture and gaudy gold tableware is by no means representative of the elegant furniture designs contained within. The introduction by Andrej Kupetz sets the tone by explaining the context of 21st Century design as a natural successor to the functionalism of Louis Sullivan's edicts and the visual expression of the Memphis movement. I still find the description of eras from the last fifty years as "modern" and "postmodern" somewhat confusing, but since it has become common usage I understand the authors need to use the terms. More interestingly, however, the remainder of the book does provide some new and useful (though not likely to become common usage) categories for recent design movements.

After the introduction, the book is structured in four parts: The Modernists, The Inventors, The Taletellers, and The Entertainers. Each section has a short introduction detailing the movements and their major players. The layout includes a mix of full bleed photographs, silhouettes and nicely gridded pictures with descriptive text. For some work, short background essays on the designers accompanies the photos. A lot of the furniture included in Desire transcends the neat categorization that the author provides, but is equally effective at provoking the emotion to which the title aspires. Though much of the work profiled here is more exhibition piece than industrial production, any reader is likely to discover something to lust after. For me, it was Kjellgren and Kaminsky's "Pompous Fat Armchair" which looks like set design from the Matrix met an 80's couch and a folding umbrella in an S&M club. Since that may not quite be your thing (and both the designers and myself admit that it isn't normally ours either), I encourage readers to find their own wish list inside. 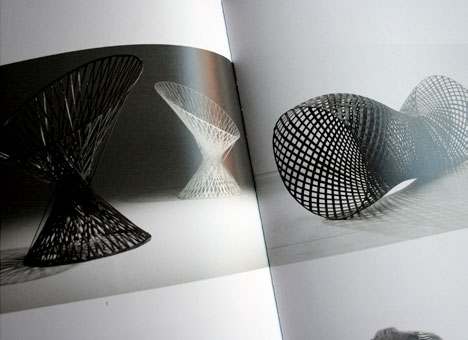 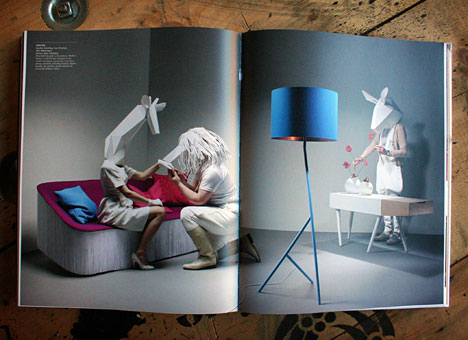 The first section, The Modernists, showcases successors to the sleek and minimal work that Dieter Rams designed for Braun in the 50's and 60's. These pages are filled with straight lines, simple curves, and the artful intersection of bentwood with gray upholstery. The emphasis is strongly in the Scandinavian school, but the designers take their cues from classic forms and then update them. Of particular note is Osko+Deichmann's mechanical Clip chair. It takes the form of a slatted lawn chair, but evolves with hinges into a folding 3D sculpture. Herme Cisar and Monica Garcia's Ninho office furniture unmasks the chipboard that often hides under Ikea veneers, revealing graceful forms with a shockingly pleasing texture. Other work begins to show the constraints behind its design through visible joints and knockdown assembly. By showing some functional requirements, the materials here lead nicely into the next section. 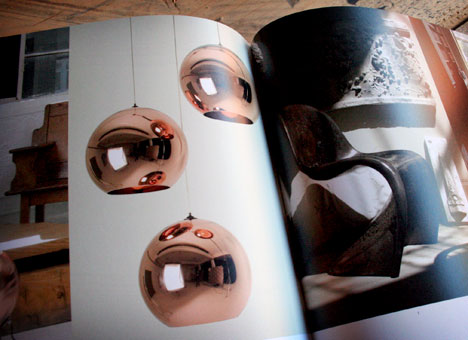 Designers like Konstantin Grcic and Joris Laarman typify what Desire profiles as The Inventors. Some of this material mirrors projects covered in Process, reviewed earlier, but covers far more work, albeit with less detail. Those two books provide nice companion pieces for one another. The Inventors was arguably my favorite section, showcasing a variety of 21st century techniques like the now common but still amazing rapid prototyping technology, and also includes some truly innovative engineering like Bas Van Der Veer's mathematically designed paper table, which really is paper and uses a series of triangular folded structures to hold up an apparently heavy slab of glass. I also loved Anthony Dickens's witty Anglepoise Fifty table light, which updates the original articulated 1932 Anglepoise lamp as a single piece of transparent vacuum formed plastic, cast to form exactly half of the original light with the cord snaking its way up the vacant armature into a bell shaped cavity. Gareth Neal's much discussed Anne Side Tables are also included, showing the ghost of a Queen Anne side-table from 1730 inside a blocky modernist shell, revealed through a series of subtle cuts. 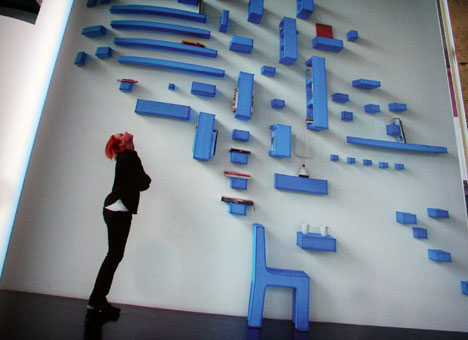 The last two sections, The Taletellers and The Entertainers flow together as well. The Taletellers are typified by designers who use story and art to produce one-off art pieces structured around a backstory. I particularly enjoyed Ditte Hammerstram's furniture which upholstered simply structured furniture with textured fabrics. Work included stylized wrinkles and patterns of tufts. Her Loungescape sofa wrapped modern benches with earth-toned fabric bound together in a network by cuffs at the feet and punches in the surface. After that section, The Entertainers fuses all of the stylistic conventions discussed so far: Modernism, technological innovations and a prosaic design history. The Pompous Fat Armchair is included in this section, along with installations by Jaime Hayon and Front's Shade furniture, with patterns and prints derived from the natural play of light on furniture. As an industrial designer, I appreciated the furniture designed by industrial processes included in the first two sections, but that didn't prevent me from wishing I owned a few of the art pieces detailed at the end of the book. 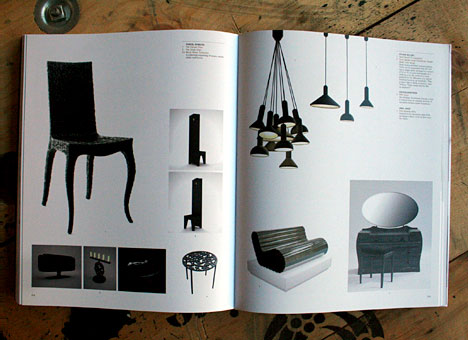