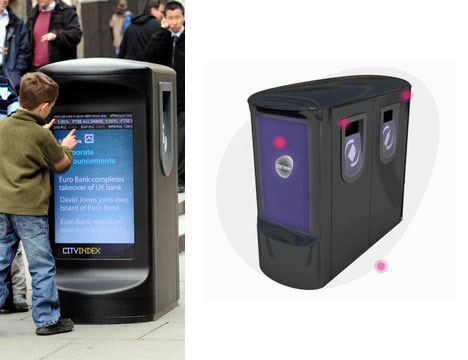 Terrorist attacks have had the unexpected side effect of producing dirty public spaces, as police remove trash cans as potential bomb-hiding spots. But now the UK's Media Metrica is directly addressing the problem with their Renew Solutions bombproof rubbish bins, slated to hit London's streets in 2009. (London has been removing trash cans since 1991 in response to IRA attacks.)

The new bin is designed to absorb the heat of explosives and prevent the spread of shrapnel using "blast intelligent technology".

And in its new guise the bin will not only protect and collect, it will also keep passers-by up to date. Each will be fitted with the latest electronic technology, providing a stream of news and travel information on LCD screens.

The terrorists may "hate our freedom," as Bush has been pilloried for stating, but maybe they'll envy our clean, orderly streets.

via wired and times online