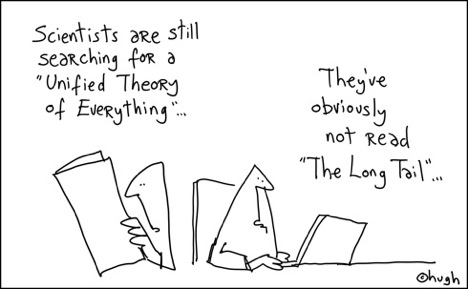 The Register has an article on a study on the long tail that puts an additional chink or two in the armor of the popular digital distribution theory. Economist Will Page (of the MCPS-PRS Alliance), his colleague Gary Eggleton and Mblox founder Andrew Bud looked at tens of millions of transactions and came to conclusions that are odds with Chris Anderson's long tail teachings.

The transactions had a log-normal distribution, not the power law distribution common in long tail theory. The trio found a relatively concentrated head and a "rather poverty stricken tail."

"They discovered that instead of following a Pareto or "power law" curve, as Anderson suggested, digital song sales follow a classic Log Normal distribution. 80 per cent of the digital inventory sold no copies at all - and the 'head' was far more concentrated than the economists expected."

Research by Anita Elberse, an associate professor at Harvard Business School, has similar findings about the concentration of hit titles and consumers' lack of interest in the obscure. "Light users have a disproportionately strong preference for the more popular offerings," she wrote in a reaction to Anderson's rebuttal to her study.