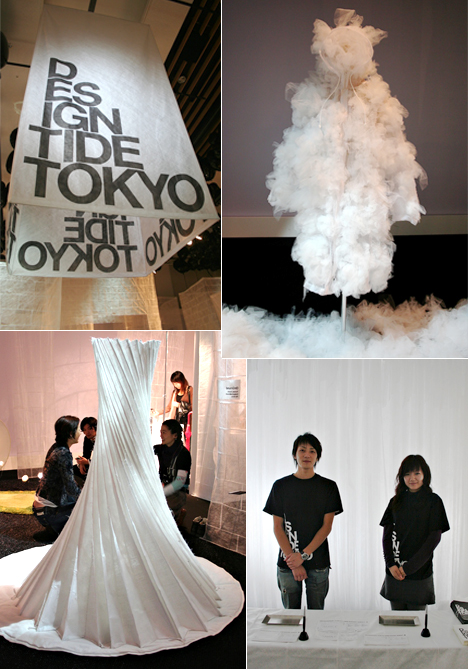 Kousuke Tsumura, designer of the legendary Japanese fashion label Final Home, was exhibiting his Network of Air installation at this year's Design Tide in Tokyo. Tomoko Azumi presented her Tippie Tent as part of the project OnGround in which - together with co-designers Rie Isono and Katayama @ Moviti - she asks "What do we really need? What are the contradictions in our life?". The small spaces that they created are designed as a personal hideaway from "speedy consumerism". 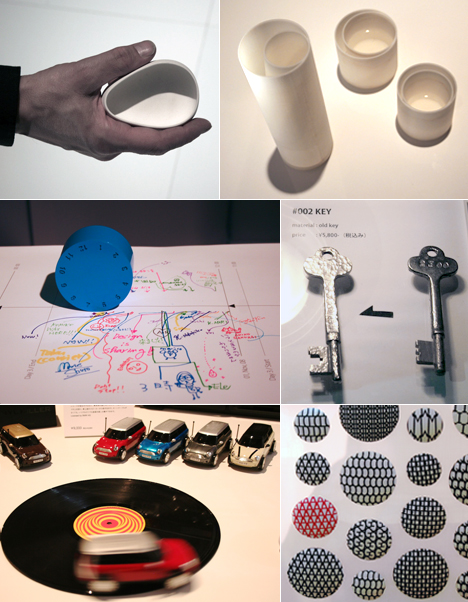 Darren Onyskiw & Soft Geometry showed their unconventionally shaped sO Sake Cup collection as well as their Double Cup collection, both based on the traditional Japanese measurement system shakkanho. Retz Yoshimoto's moving clock rolls about as time goes by and 501 Designstudio makes mass-produced goods look like handmade originals by treating them with a hammer. Reijin Fukao of Razy Works showed the Mini Clubman record player which races on vinyl tracks (playing them through its integrated speaker) and Malina Baumann sold her limited edition badges with patterns created from different letters of the alphabet (for wearing encrypted messages or little personal secrets as a fashion accessory). More after the jump. 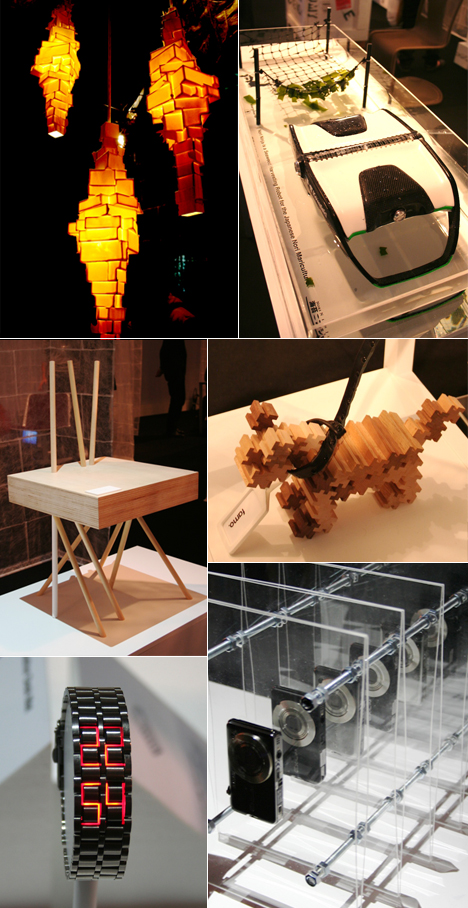 Shown above are Chris Kirby's lamps from his Negative series, Martin Schatz' Nori Ninja (a seaweed harvesting robot), Emanuelle Moureaux' Stick Chair, Toshitsugu Fujiwara's Merge system (a playful wooden modular system to create an infinite number of different shapes to serve the child in all of us), Hironao Tsuboi's ingenious watch in which the digital numbers appear in the gaps of the metal band and the presentation of the new Exilim camera where the final picture was taken via a chain of cameras placed in front of each other. 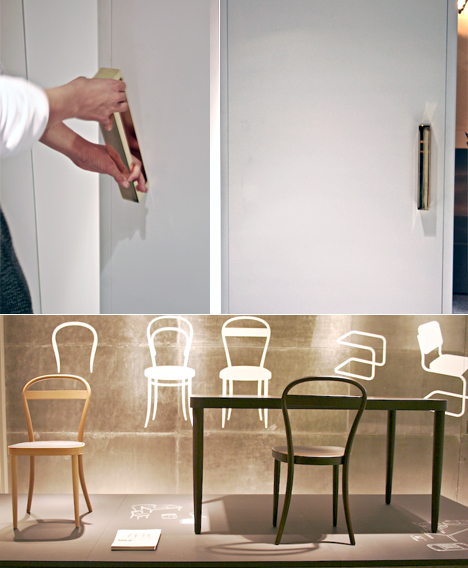 Kazutoyo Yamamoto presented his project Sterotype in which a door with only a doorknob was shown - yet it wasn't easy to open because of a lock called "sterotype": Only by removing the magnetic doorknob from the right side of the door (where also the hinges of the door are placed) and placing it on the left side, the door was able to be opened. Finally Muji showed its new range of furniture in collaboration with the German manufacturer Thonet. The classic bentwood chair No. 14 was re-designed by Jasper Morrison and Konstantin Grcic designed Pipe - a simple yet beautiful series of tubular steel furniture, based on Marcel Breuer's design classic for the Bauhaus.