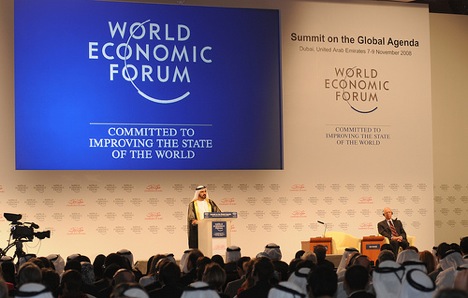 The World Economic Forum's inaugural Summit on the Global Agenda, which just closed in Dubai, was billed as a new and unique gathering of the world's most influential thinkers - leaders from academia, business, government and society.

Structured in a network of over 60 Global Agenda Councils, the Summit provided a platform to share ideas and collaboratively address some of the key issues on the global agenda, with the aim of becoming a "brains trust" for solving major international problems.

The reports of each of the Councils are already online. The Council that dealt with design chose to write a design manifesto.

The group was chaired by Chris Luebkeman, director of global foresight and innovation for ARUP, and included Paola Antonelli, senior curator of the Museum of Modern Art in New York, Tim Brown of IDEO, Brian Collins who now runs his own ad/marketing company in his own name, Chris Jordan, a photographic artist, Toshiko Mori of the Harvard University Graduate School of Design, Bruce Nussbaum, assistant managing editor at Business Week, Alice Rawsthorn, design critic at the International Herald Tribune, Milton Tan, Executive Director of DesignSingapore Council, Ministry of Information, Communications and the Arts, and Arnold Wasserman, chairman of The Idea Factory in Singapore.

Others in the group who couldn't make it to Dubai were Chris Bangle, director of design for BMW, Hillary Cottam, founder of Participle in the UK, Kigge Mai Hvid CEO of Index in Denmark, Larry Keeley of Doblin, John Maeda, President of RISD and William McDonough.