The Type Coaster: from crazy idea to raging success in two months 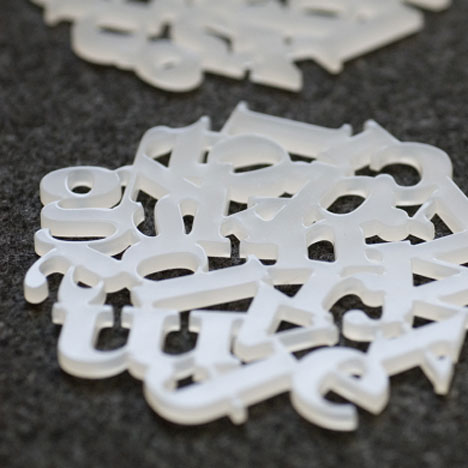 Many Core77 regulars are probably familiar with Ponoko, the New Zealand-based mini-manufacturing community that takes user-submitted designs and laser-cuts them into products for sale in its online shop. The shop is several hundred items deep at this point--largely jewelry, though some desktop and flat-pack furniture is in there too--but one item in particular has been drawing attention lately. It's a coaster, laser cut from frosted acrylic to look like a jumbled bunch of serif text. It's a beautiful object, like many of its compatriots in the Ponokoshop, but is especially remarkable because of its designer, an 18-year-old graphic design student named Alan Chao, who took it from initial concept to first sale in a mere 24 days.

If you follow the link to the coasters themselves, though, you'll notice that they are emphatically Not For Sale. This is because they've since been picked up by illustration and typography seller Veer, who will begin selling them next month, presumably in their Merch section, in the company of some other very hip designery shwag.

Alan's story is interesting for a couple of reasons. First, it's an unusually direct line between concept and product, and a prime example of the kind of technologically-enabled democratic design that Ponoko has been all about since day one.As their website enthusiastically points out, the typical process for turning an idea into something that can be sold is extremely slow and obtuse, requiring much specialized knowledge and large startup costs. Many observers of manufacturing technology over the past couple of years have been predicting a drastic reduction in these obstacles as niches get smaller and rapid prototyping gets cheaper and more robust. The coasters make an ideal object lesson.

Second, the process by which Chao took his concept to market has been thoroughly documented. Log into Ponoko's website and you'll find an intro video, a 24 minute audio interview with Chao, and some thoughtful analysis of why he succeeded. This last bit is probably the most interesting for design students; a three item list of "lessons from Alan Chao." Number 2 includes the following:

One thing that Alan decided very early on was that he wanted to share his idea as soon as he could to find out 2 things with as little effort as possible - (1) did anyone actually like it and (2) could it be improved. As Alan said, he tweaked his design 4-5 times AFTER he put it out into the public. And some of these tweaks came AFTER people had purchased his coasters and stuff had broken. Huh? But he put this right with refunds and continued on - and was ultimately very successful. Oh I see!

The Type Coaster: from crazy idea to raging success in two months