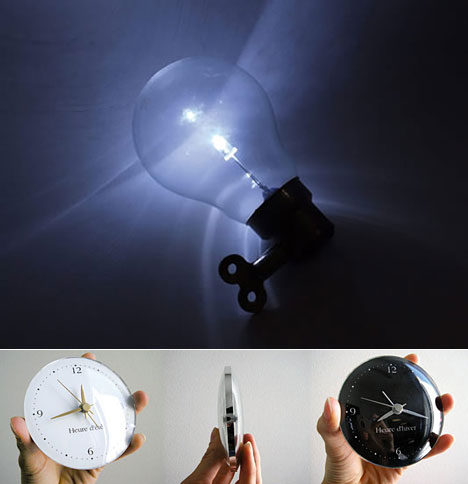 One of our absolute favorite projects in the Saint-Étienne Design Biennale was Anaïs met den Ancxt's Energy Solstices, a project completed as part of her post-diploma at Ecole Supérieure d'Art et de Design de St Etienne, partnered with EDF R&D (with Mathieu Lehanneur as the research director). The project was one of many inspiring design investigations in the school's "Réalisme énerg#233;tique" exhibition, and had us scrambling for our cameras and sketchbooks.

In Anaïs's project, the notion of daylight savings time is explored, arguing that its practical advantages have been blurred by technology, and that the purpose today would be to transform the practice "into seasonal rituals with a symbolic dimension."

She's done this with a set of incredibly poetic objects--all housed in a sweet wooden box, with which users can equip themselves for the changes that happen twice a year. Our favorite objects are the wind-up light bulb above, One hour of light (LED, small clock wind-up key, battery) which is used during the Winter solstice--when night falls one hour earlier. Its small clock wind-up key produces a symbolic hour of light.

Another favorite is Recto-verso clock, which slows down or speeds up the time over a four-day period, helping users to "update" their own internal clock. (That's the amount of time it takes us to adjust, apparently.) There are lots of other great items in the set, so be sure to check out the site to see them all.