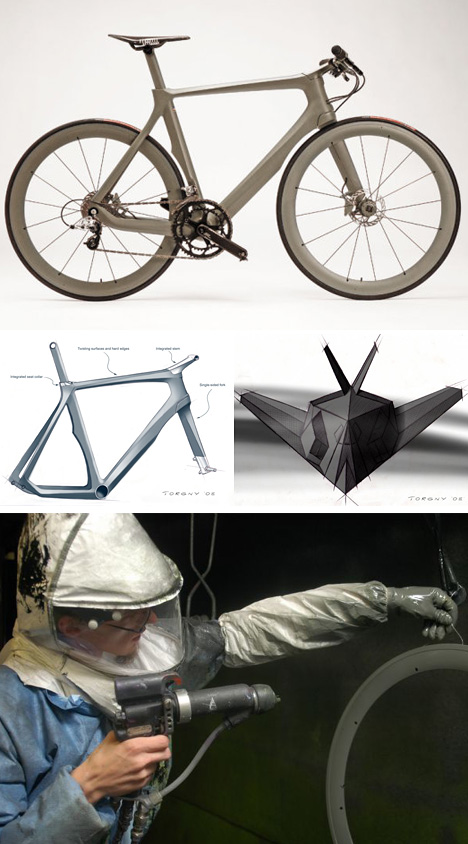 The F-117 Nighthawk may have been retired but it's spirit lives on in Canondale's Stealth Concept Bike which debuted earlier this year at the Eurobike Show in Germany.

The styling direction of the Cannondale Stealth Concept was, as the name reveals, inspired by Stealth fighter jets, which have a very distinctive edgy shape in order to be invisible on radar. Another source of inspiration was last year's Lamborghini Reventon sports car, whose faceted surfaces and custom flat paint lend the car a unique and stealthy appearance.

The bike was designed by Cannondale's in-house design team, and prototyped from Carbon fiber and aluminum at Cannondale's own factory in Bedford, PA. The frame was designed and manufactured as a monocoque carbon part making the front triangle including the chainstays in the mold, a first for Cannondale. The frame mold was machined from two 350lb blocks of aluminum and used seven bladders during the molding process. Using a similar molding process, the Stealth concept also showcases the first full carbon fiber rigid Lefty fork for a road bike including disc brakes. The dropouts, seatpost clamp, headset cups, Lefty road spindle, and fork mold were all machined from aluminum in our Bethel office in CT by our Engineers. The final bonding of the carbon and aluminum structure was completed in the Bedford facility as was final finishing, paint and assembly. The prototype is rideable and weighs in at 8,8kg.