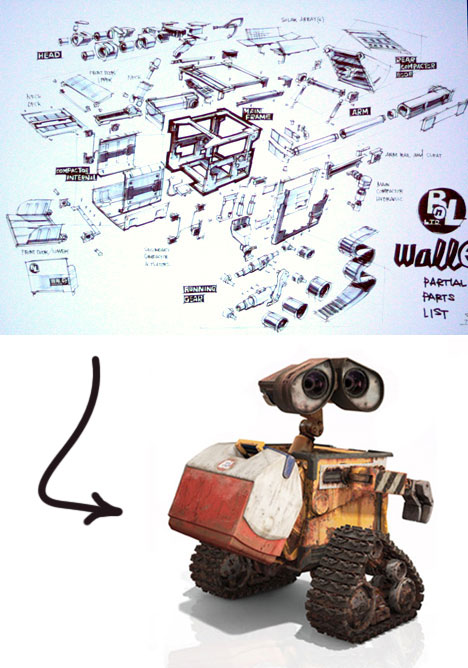 That there is an exploded view of Wall-E, sketched by Pixar's Jay Shuster as part of the character development process for movie of the same name. It seems a bit odd at first that you'd want to get into that kind of detail for a fictitious object, but across three presentations by three renowned concept designers last week at Autodesk University, one of the constants that arose is this: good concept design is good product design.

Jay, it turns out, was trained in Industrial Design at the College for Creative Studies in Detroit, and grew up surrounded by cars and mechanisms--his dad was a designer for GM. So it might be fair to say that much of his success building fictitious worlds for George Lucas and Pixar is built on an ability to design in the real world. After a long day sketching concepts, Schuster's fond of going home and unwinding by building furniture, often from old aircraft parts he gleans from a warehouse in the East Bay. 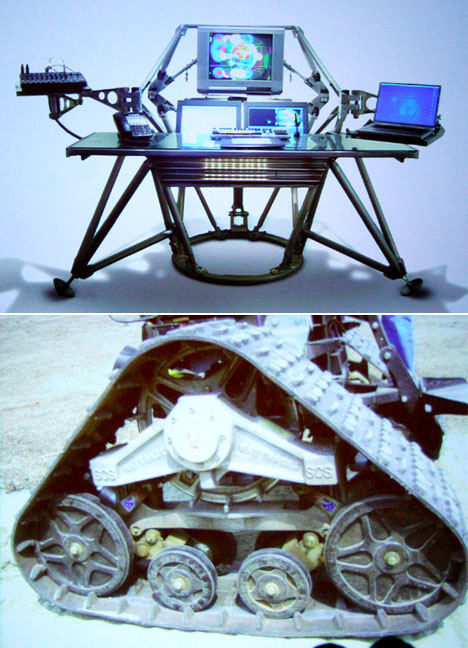 The amount of physical study that goes into these concepts is dramatically greater than what we expected: the close-up above is from a prototype Mars rover that Pixar's team examined on a study trip to the Jet Propulsion Lab in Pasadena, one of several such forays (they had the local bomb squad demonstrate one of their robots in-house too).

Lots more images after the jump.

>>View all AU 2008 coverage here.The more you examine it, in fact, the less distinguishable concept design looks from traditional product design--except that there's generally a lot more money at stake. The foamcore models Shuster and his colleagues built as form studies wouldn't look out of place in an ID studio, and are used for much the same reason: to insure that what looks right in two dimensions works right in three. 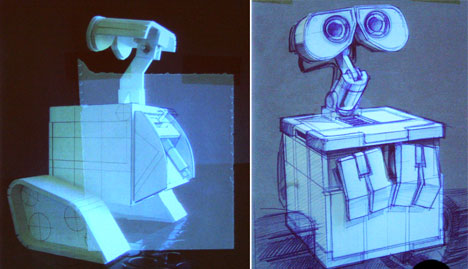 Scott Robertson (shown below with one of his paper bag alien heads) studied transportation design, not art or illustration, though his alma mater ArtCenter has outstanding programs in all three. 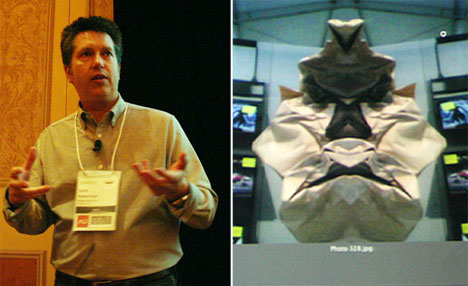 He did, however, have probably the most succinct explanation of the week for why good concept designers so commonly come from ID and related backgrounds: "If you're designing, let's say, a gun for an alien race that has three fingers on each hand, it's going to look different from one used by humans--so is everything else those aliens use. Making all these objects look right--and look consistent--is mostly a result of designing them with the user in mind, even if the user doesn't exist."

Daniel Simon, who designs some of the sexiest imaginary cars imaginable, has a similar approach. Also trained in Trans Design, at Pforzheim in Germany, his presentation walked the audience through a typical project; in this case a sleek asymmetrical beast of racer called the Gravion. The similarity it bore to the design of a real transportation project was striking, from ideation sketches to initial surface models to presentation rendering. 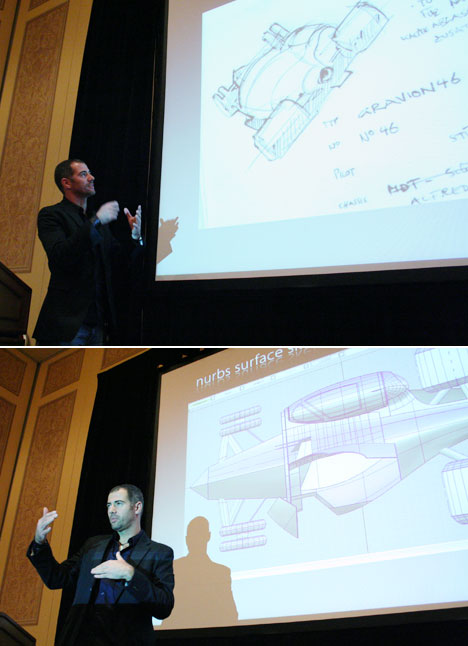 The level of creativity, finish and raw excitement seen in his Cosmic Motors series comes at a certain price, of course. When asked whether he had any interest in moving into design for manufacture, Simon shrugged and admitted there was an entire skill set to real-world design he'd side-stepped, for example in designing a molded part: "It needs a little angle to leave the mold..." i.e. draft.

If that's the price to be paid for inspiring a generation of designers to come, then it's well spent. Much as Robertson's conceptual designs have been cited by numerous young product designers as sparking their initial fascination with the field, Simon, Shuster and the few others of their level are likely performing a similar service for young creatives right now.

Other similarities among the three: they all cited Star Wars as an early and powerful inspiration (though Shuster admitted that "The original Star Wars changed my life...and then Episode One changed it back"), and all three of them are really nice guys who spent the better part of an hour signing books... 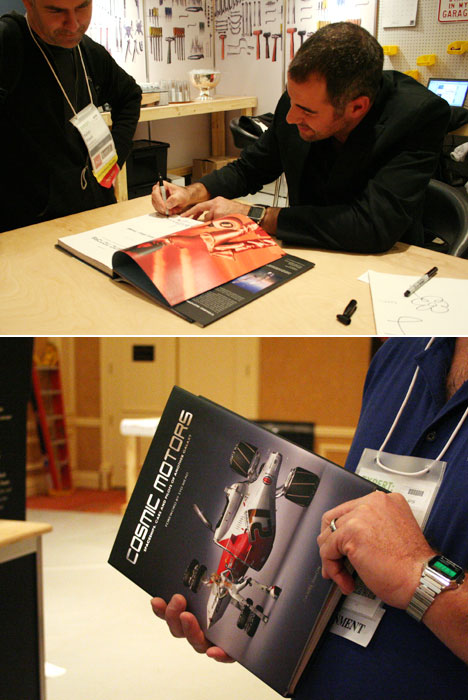 ..or in Shuster's case, copies of Sketchbook Pro, for which he contributed the extreme perspective prop plane on the cover. In one try. The day after installing it for the first time. Ouch.