Brilliant water-based eyeglasses for the masses: No optician required 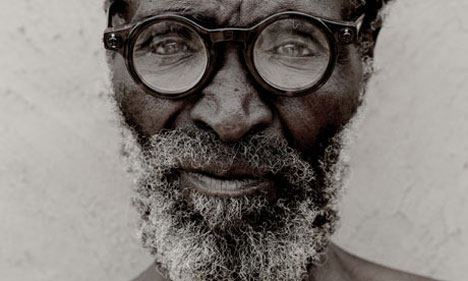 British inventor Josh Silver, a former professor of physics at Oxford University, has come up with a game-changer of a product design with his water-lensed glasses.

Silver has devised a pair of glasses which rely on the principle that the fatter a lens the more powerful it becomes. Inside the device's tough plastic lenses are two clear circular sacs filled with fluid, each of which is connected to a small syringe attached to either arm of the spectacles.

The wearer adjusts a dial on the syringe to add or reduce amount of fluid in the membrane, thus changing the power of the lens. When the wearer is happy with the strength of each lens the membrane is sealed by twisting a small screw, and the syringes removed. The principle is so simple, the team has discovered, that with very little guidance people are perfectly capable of creating glasses to their own prescription.

You can mass-produce millions of these, rather than manufacturing myriad individual lenses each tuned to a user's specific vision deficiencies. And while the one-size-fits-all mentality may not fly in developed nations, Silver's goal is to help the hundreds of millions of people in developing countries who suffer from poor eyesight.

Silver calls his flash of insight a "tremendous glimpse of the obvious"--namely that opticians weren't necessary to provide glasses. This is a crucial factor in the developing world where trained specialists are desperately in demand: in Britain there is one optometrist for every 4,500 people, in sub-Saharan Africa the ratio is 1:1,000,000.

The implications of bringing glasses within the reach of poor communities are enormous, says the scientist. Literacy rates improve hugely, fishermen are able to mend their nets, women to weave clothing. During an early field trial, funded by the British government, in Ghana, Silver met a man called Henry Adjei-Mensah, whose sight had deteriorated with age, as all human sight does, and who had been forced to retire as a tailor because he could no longer see to thread the needle of his sewing machine. "So he retires. He was about 35. He could have worked for at least another 20 years. We put these specs on him, and he smiled, and threaded his needle, and sped up with this sewing machine. He can work now. He can see."

So far 30,000 of Silver's specs have been distributed, but more are on the way; his eventual target is 100 million pairs.

Brilliant water-based eyeglasses for the masses: No optician required