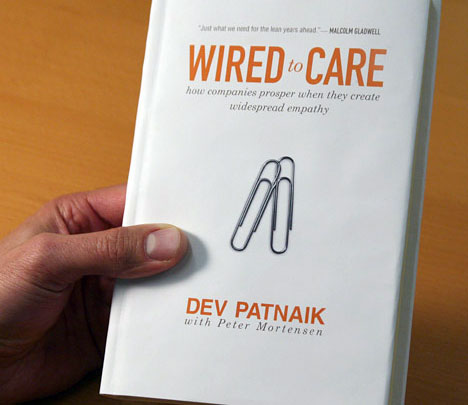 The concept of "needsfinding" seems unique to our consumer culture. True needs like air, sleep or hunger announce themselves with neurochemical fury, tearing animals away from what they think they should be doing and dragging them into the immediacy of their body. So when we industrial designers talk about the customer's undiscovered needs and how our products can address them, we should admit to ourselves that needsfinding, as we know it, is an oxymoron. For most of corporate America, resonating with their customers is really more about finding things their clients didn't know they wanted rather than needed.

For some clients, though, the issue of wants versus needs does begin to blur. In their book their book Wired to Care on customer empathy, Dev Patnaik with Peter Mortensen wisely begins with the example of Patty Moore, a young industrial designer who wandered out into the city streets with a fake white wig, earplugs, blurry glasses and a cane. For Patty, the needsfinding journey was about discovering what parts of the modern world were incompatible with old age. No doubt the city was filled with plenty of other real elderly women who were perfectly capable of navigating, but it took her Harrison Bergeron outfit of handicaps to make Patty realize just how hard walking a mile in those shoes might have been. What Patnaik has done is realize that the "needsfinding" exercises that industrial designers do that seem so focused on objects and products are really about people and empathy. So while empathy and companionship aren't exactly the most primitive of needs on Maslow's Hierarchy, they are among the most human, and frankly, a little humanity is something that most companies could use a little more of.Business books these days tend to take a page from Malcolm Gladwell, structuring themselves as a series of chapters that read like individual anecdotes or short stories, but all revolve around a common theme. Wired to Care shares this format, and touches on examples with which industrial designers and many businesspeople should already be familiar. Once again, we hear how Betsey Farber's experience with hard and narrow tools led her to create OXO Good Grips, and about how Harley Davidson turned itself around by focusing on bike culture rather than bike manufacture. I was impressed that even though I read a lot of business books, Patnaik surprised me with some fresh examples.

Instead of simply cataloging the (late 90s) rise of Starbucks, he prefaced his discussion of the coffee chain by focusing on how Maxwell House had slowly degraded their coffee over time by replacing Arabica beans with Robusta due to supply and cost pressure. They'd devalued their own product almost imperceptibly over time and slowly lost touch with their customers while doing so. Likewise, instead of simply talking about the Apple juggernaut and waxing philosophical about the iPod, Patnaik talks about Apple successes through the failures of Microsoft. Talking first about the Xbox, which was a smashing success for Microsoft, he then addresses the Zune. The Zune was/is Microsoft's competition with the iPod for the mp3 market, but it has not faired nearly as well. Amazingly, however, Patnaik tells us that the Xbox and the Zune had the same design team. The Zune failed and the Xbox succeeded because the design team consisted of hard core gamers. Because they were their own audience for the Xbox, they didn't need empathy or needsfinding. Sadly, that didn't hold for the Zune, and Apple's careful development and design process left them in the cold.

On the strength of anecdotes alone, I'd put Wired to Care ahead of many comparable books because the case studies included haven't already been hashed over in the popular press. What really sets it apart, though, is the science at the end that pulls it all together. Patnaik spends a full thirty pages exploring the scientific underpinnings of the success stories he's included, with details on mirror neurons and the influences of the limbic system on purchasing decisions. In some ways the concepts are almost reminiscent of the fears about subliminal messages from the sixties and seventies, except that they work. Fortunately, the only way for a company to convincingly act empathetic is to actually be empathetic, and that's good news for us all.