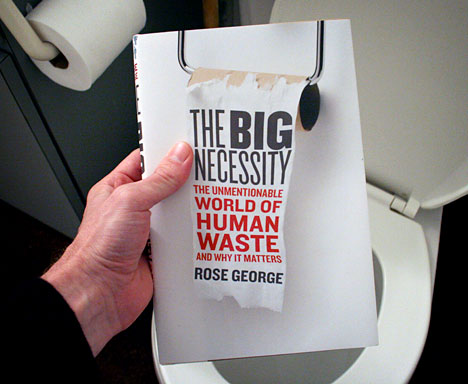 For those of you who want to become experts on toilets, the reading list isn't long, because not enough serious books have been written on the subject. There's Alexander Kira's seminal book from the '70s, The Bathroom: the first to address ergonomics in this intimate place for industrial design. More engrossing and pithy is Ellen Lupton and Abbott J. Miller's The Bathroom, the Kitchen, and the Aesthetics of Waste. When it comes to eco-toilets, the most informative might be Lifting the Lid: An Ecological Approach to Toilet Systems by Peter Harper & Louise Halestrap, while the most fun is certainly Joseph Jenkins' The Humanure Handbook.

But as of fall 2008, your first book will have to be Rose George's revelatory The Big Necessity: Adventures in the World of Human Waste. With good humor and deep seriousness, George travels the world and presents impressive research about the current state of sanitation.

Colorful encounters with people and places are centered around dismal facts. 2.6 billion people worldwide currently have no toilets--as George puts it, "Four in ten people have no access to any latrine, toilet, bucket or box." Resulting waterborne illness kills about 7000 people every single day. The centuries-old solution that's still current--flush toilets with sewers--is already taxing the richest economies, and won't be sustainable anywhere in the long term.

George asks why such a fundamental aspect of our designed lives remains on the margins of polite conversation. After all, she points out, Le Corbusier called the toilet "one of the most beautiful objects industry has ever invented." Its purpose is unremittingly crucial. "The toilet is a physical barrier," she writes, "that takes care of the physical dangers of excrement."

And toilets embody lots of other shit: physiologies, cultures, infrastructures, economies, even politics. They are a perfect example of how objects are much more than objects. They are the vehicle that carries away our largest bodily contribution to the planet (about a thousand pounds per person per year) and yet our current solution is to flush and forget using several gallons of drinking water.

George doesn't offer design solutions, or even any clear directions. And with only a handful of images, this is not your typical design book. Her style is that of a reporter, without grand theories or visionary futures. And her account might leave problem-solvers feeling despondent. Of course, this is why industrial designers should read it. "The first thing sanitation needs," she concludes, "is a spotlight shining on it. It needs to be unshackled from shame. It needs scrutiny."

Many of the stories she tells could turn into design briefs. For inspiration, get the book. For the moment, I leave you with a few examples:

- Toilets haven't changed much since the Victorian era. In fact, George writes, "The modern toilet would still be recognizable to Joseph Bramah," one of its 18th century inventors. This is in stark contrast to other modern inventions, like the telephone or automobile. Meanwhile, marketers call a toilet "a 'distress purchase', because it is only replaced when necessary." How can we sell the innovation that toilets so badly need?

- Even though washing your bum with water is proven to be cleaner than wiping with toilet paper, people will not switch over. TOTO, the Japanese company famous for their built-in remote control bidets, have tried countless ways to promote washing. Meanwhile, George tells us, "The global toilet paper industry is worth $15-20 billion, and according to the most recent statistics available, the average American uses fifty-seven sheets a day." She also mentions toilet paper advertising: "unrelenting pastels and puppies." Can design shake up this longstanding fixation? Does it need to?

- In parts of the world where open defecation has become tradition, changing behavior will take much more than supplying toilets. "All over India," George writes, "those millions of government-built latrines have been turned into millions of firewood stores or goat-sheds. Surveys found that they were unused, misused, or ignored." What role will design play to transform the situation?

- New toilets for urban slums have extremely low-cost competition: "The cheapest latrine in Tanzania, and in every other developing country, is a plastic bag. Kenyans call them 'helicopter toilets,' Tanzanians prefer 'flying toilets.' Whatever the name, the technique is the same: defecate, wrap, and throw. Anywhere will do, though roofs are a favorite target and alleys are popular." Flying Toilets have a nice name and a deadly price--cholera. But what will beat their low price-point?

Virginia Gardiner is a London-based industrial designer with an ongoing interest in digestion and metabolic processes. Her current projects include a new waterless toilet, the GCH4, at www.excrextra.com.